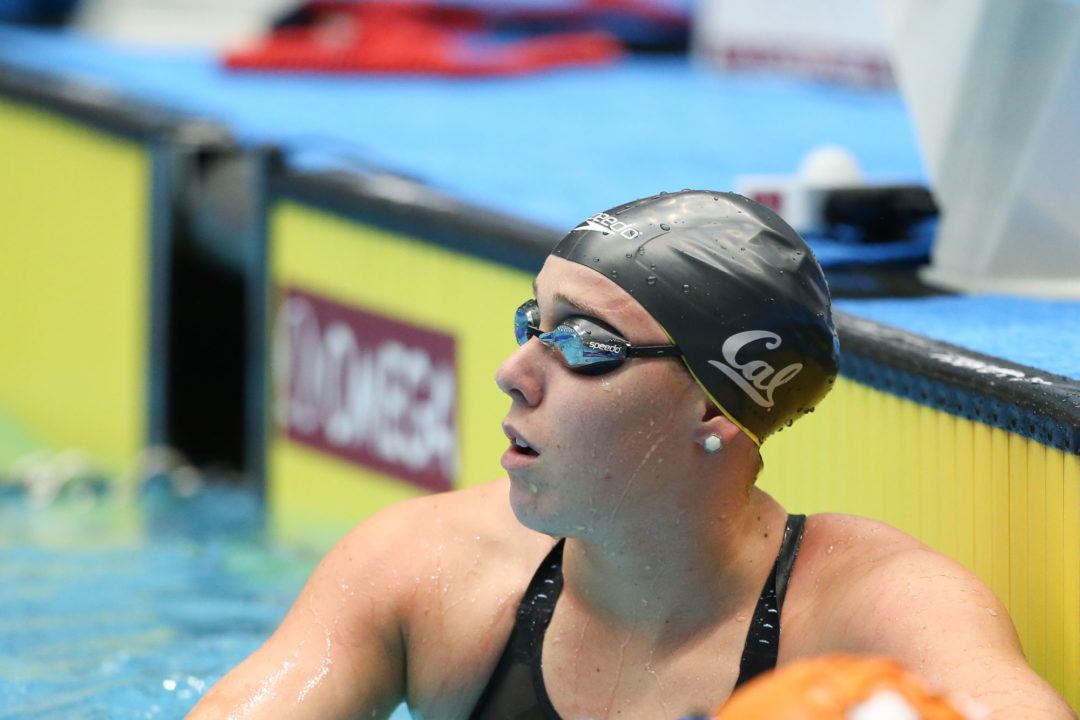 For the title of sprint queen in the 50 free, Cal's Abbey Weitzeil and Tennessee's Erika Brown look to have a battle like none other for the American record. Stock photo via Tim Binning/TheSwimPictures.com

Peering into the top sprint event of the women’s NCAA meet, the 50 free should be a more competitive race than Simone Manuel’s .33 second margin of victory last season. Cal Bear and current American record-holder Abbey Weitzeil will be pitted against Tennessee’s Erika Brown, who shined at the SEC championships, with both gunning for the American record.

As compared to their 2018 season-bests, both Brown and Weitzeil improved a quarter of a second in 2019 to sit at season-best times of 21.15/21.16, respectively. The difference was that Weitzeil has the oldest personal best of the field, dating her time of 21.12 back to 2016, before arriving at Cal. That’s the fastest-time ever in the event.

As the only 2 swimmers returning from 2018’s A-final, experience may be the weapon for these two in the battle to the top.

Nearly four-tenths behind Brown and Weitzeil is almost a 7-woman fight for the remaining places. In a three-way tie for third seed is Arkansas’ Anna Hopkin, Louisville’s Mallory Comerford, and NC State’s Ky-lee Perry.

*Note that Anna Hopkin’s, seed time of 21.47 (as entered in the psychs) is a converted time from a SCM swim back home in England in December. Her best yards time is 21.58.

Mallory Comerford is opting to swim the 50 free after declaring a sort of retirement from the 500 free for her final collegiate meet. In 2018, Comerford finished in 27th place in the 500 free, gaining 6 seconds from her seed. We haven’t seen her do an individual 50 free at NCAAs in a while, so she’s the wildcard in this race. She certainly has the results internationally (and experience) to battle with Brown and Weitzeil for the title, even if her times so far aren’t in the same league.

While NC State’s Ky-lee Perry is the 3rd seed,  Virginia’s Morgan Hill upset Perry at the ACC Championships by 0.01 with a 21.68. For Hill, that time knocked off almost half a second from her 2018 season best.

Looking back at the 2018 meet, Auburn’s Claire Fisch gained almost half a second and finished all the way in 43rd place (representing Arizona State at the time). This year, however, Fisch comes in as the #8 seed with a 21.65, improving 0.62 seconds off her 2018 best to finish 3rd at the SEC Championships. With a new school, coach, and probably taper plan, it’s hard to use that history as much of an indicator for 2019.

While not having a terrible prelims swim in 2018, Cal’s Amy Bilquist just missed the championship final. While Bilquist gained not even two-tenths, it was enough to bump her out of the top 8. This year, Bilquist dropped a tenth off her lifetime best and comes in seeded with a 21.64. While the senior looks good for the 2019 meet, a crew of freshmen come in as dark horse threats in the event.

Michigan star Maggie MacNeil is one of those freshman threats. While she is the #7 seed, MacNeil is potentially a wildcard in this event. Coming from Canada, MacNeil never swam in a SCY pool until this season. She has only swam the 50 free 11 times, jumping from a 22-high down to a 21-mid in less than 5 months. With her smooth transitions to yards and exceptional FL/BK performances, MacNeil could have the same momentum into the 50 free.

Her fellow freshman counter-parts, Texas’ Grace Ariola and NC State’s Kylee Alons, improved significantly since their high school days to be in top 8 contention as well. Alons improved 0.66 seconds from her HS best and finished 3rd at the ACC championships. Meanwhile, Ariola dropped 0.47 seconds from her HS best. However, Ariola stayed at 22.09 at the Big 12 championships. Needless to say, Alons and Ariola, along with MacNeil, will look to impress for their NCAA debuts.

Darkhorse: Catie DeLoof, Michigan, Senior – DeLoof enters the meet as the 14th seed in the 50 free, but it’s worth noting that both of her older sisters Gabby and Ali had huge NCAA Championship meets as seniors, putting in lifetime bests in the 50 free. If Catie can capture that family magic, her 21.88 puts her well within shouting distance of the A final in the 50 free (it’s already faster than either of her sisters have been).

Pay-Per-View could sell this match-up.

Neither will likely go faster at NCAAs.

wont cause problem for Erika Brown! Her underwater of the turn is NASTY! I think she’s taking this one.

i think so too – this is her Breakthrough year .

I haven’t seen Abbey this motivated and confident since 2016. No way I’d bet against her.

Remember the swimmer that won both the 50 and 100 in PB’s at the most stressful meet in the world aka the US Olympic Trials? Just checking.

But who won the 100 at Olympics and silver in 50? Simone! You never know what will happen. It could be Erika’s time to shine

She also had a different coach then but ok

if Those 2 could translate their speedy performances in yards into Long course by Trials 2020 , Usa could have a Fabulous 400 free relay ( maybe the fastest in a long time ) to compete with Australia – but i know i am going a bit ahead of myself here LOL . Just a deep wish to see that happening . Cant wait to see NCAA battles unfold ….Rooting for both actually

Of course, Abbey is already there– she is already on point in LC and on the relay from last summer’s natls. Erika Brown looked great at SC worlds. The challenge for her is that she relies heavily on underwaters and that doesn’t translate well to LC. So we will see.

u are so right , thanks for your input

You’ll see two sub-21s on Cal’s relay. Will be historic!