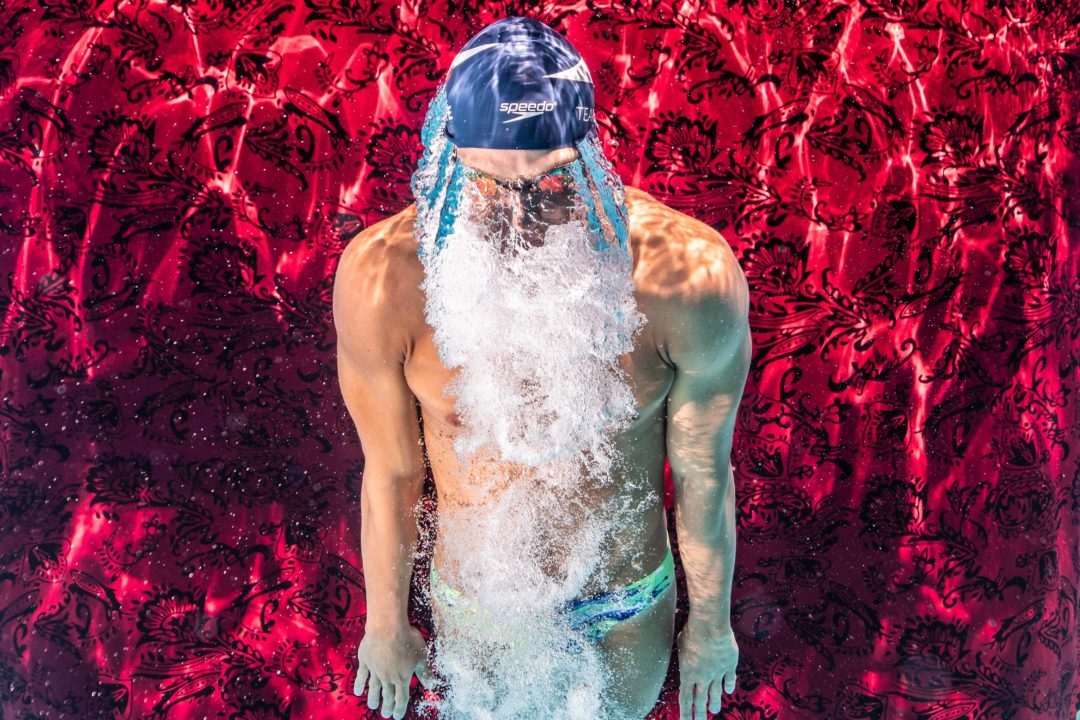 Kusch got a terrific start and had strong underwaters, making up for a couple of less-than-perfect walls. He split 20.44/23.88 to win in 44.32, 2.32 seconds faster than runner-up Pasha Semochkin of Drury.

He acknowledged his walls in the post-race interview but focused on the positive by crediting his coaches with creating a culture of excellence at Queens. “Queens is known for excellent butterfly and Polina and I showed that tonight.” [Polina Lapshina of Queens broke the NCAA Division II women’s 100 fly record on Thursday, as well.]

Kusch downed a 2015 NCAA Division II record that was set by Matthew Josa with 44.89. Most of Kusch’s advantage came over the first 50 yards, where he was .52 faster than Josa and .11 faster than Conger.

Didn’t it used to be that ANY NCAA swimmer could compete at the Division I meet? I remember Armstrong, (I think) from JHU who swam the mile maybe (my memory is foggy at my advanced age…) and a guy from UMBC who did the 200 back (although they might have been DI) I dont know… maybe it was only D3 could go to the DI meet but not D2… Anyways, my point is asking why is he not swimming at the DI meet if he can? Or will he? Again, I probably am thinking about an archaic time when the rules were different… or am I just crazy and imagining things?

Either way, congrats and awesome swim!

That was true until about 1987 or 88 when the Divisional Championships were declared “terminal”. Yes, prior to that D2 or D3 athletes in any sport could advance to the D1 championships if they met the standards and won their championship. Yes, sometimes the D2 and D3 swimmers would score at the D1 meet. But I believe it was the D2 and D3 track athletes and wrestlers who placed really high at D1s which motivated the rule change (just my opinion from old memories)

Oh I was thinking much more recently like 2005ish or 2008…. somewhere around there. The Hopkins and UMBC athletes I was referring to were in the 2000s. The more I think about, I feel like it was only D3 that was allowed to participate in DI champs, but D2 couldn’t because of some major rule difference they had…something about money or scholarships I believe. Again, I could very well just be crazy and none of that is true. Just vague recollections of a faded memory….

UMBC is a division 1 school and they also semi regularly send a swimmer or two to the national championship! In fact at the 2017 championships Emily Escobedo placed 3rd in the 200 breast, 9th in the 100 and 12th in the 200 IM

I remember Jim Born making finals in the 100 Free for Kenyon, and Dennis Mulvihill making consoles in the 200. Since then there have been a few D3 swimmers who could score at D1 (most recently Andrew Wilson), but they no longer have the chance. a shame. 🙂

This guy is 25 years old and on the German National Team, to put it in perspective.

Crazy that Dressel is the fastest by .95 sec. That has to be the most dominant lead he has, besides maybe the 50 fr and 2im. But I think it’s crazier that we have a 42.9 and after that only 3 43s. Is it really that sparse?

100 free is actually slightly less than 100 fly. Must have been that last day fatigue 🙂

Yea, everything thought he was going 39 low