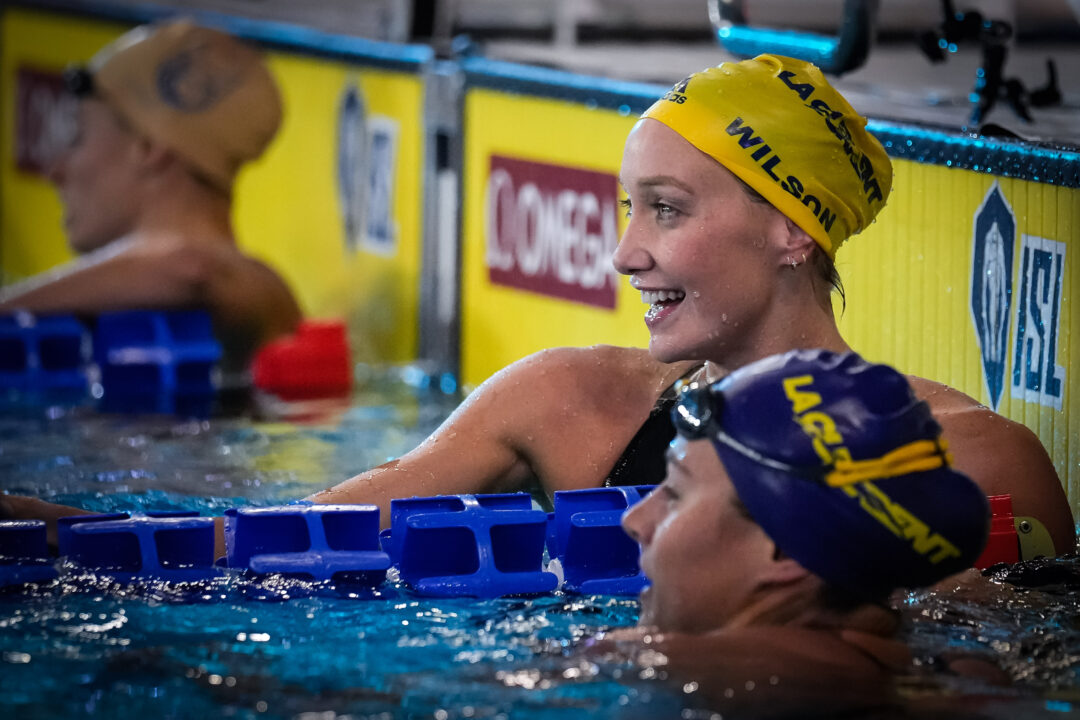 According to a recent Instagram post, Wilson has tested negative for COVID-19 and is back on deck as she prepares to compete again. Current photo via Mike Lewis/Ola Vista Photography

Australian Olympic medalist and member of the International Swimming League’s LA Current Madi Wilson has tested negative for COVID-19 following her contraction of the virus and subsequent hospitalization earlier this month.

Wilson shared on her Instagram story a photo of the message she on Monday, September 27, that she had tested negative for COVID-19. Wilson also shared a photo of herself on the pool deck in Naples, Italy, where she had been hospitalized, with the caption “you better believe the first thing I did when I was out was go for a swim.”

Since Wilson’s hospitalization, she has been very active on social media, documenting her experience and urging others to get vaccinated for COVID-19. Wilson, who is double vaccinated, said on Instagram that “Covid is a serious thing and when it comes it hits very hard. I’d be stupid not to say I wasn’t scared. I’m so lucky for all my family, friends, and support people. I can’t believe how much love I have been shown and I’m forever in debt to these people.”

While she was of course kept out of the pool during her hospitalization, Wilson shared that she was able to stay active once her symptoms subsided and even did some yoga and Pilates in her room.

According to our recent report, Wilson plans to re-join the LA Current in the upcoming ISL season 3 playoffs that will take place in Eindhoven, Netherlands beginning on  November 11. In the meantime, however, Wilson also plans to race in the 2021 FINA World Cup series.

While Wilson hasn’t been confirmed as a competitor in the first World Cup meet which will run from October 1-3, there are another 3 meets that she could potentially be able to compete in on October 7-9, October 21-23, and October 28-30. Following the conclusion of her stay in Berlin, Wilson will join LA Current teammate Anastasia Gorbenko for a 2-week training period in Israel before heading to Eindhoven.

love to hear an intellect like her opine of Covid. hopefully she can share thoughts on topics like global warming/cooling and equity as well. go Australia, build back better

Are you mad? She just stated what happened to her. And covid is serious. Sigh

hearing emma and kyle are dating would no doubt be hard on her as well/ hope shes ok.

Although they seem to be using the fact that we invited them on the London Roar Podcast together as some kind of evidence for this. By that logic Duncan Scott and Dylan Carter are also dating!

Plot twist : Kyle is dating both of them

Glad to hear she is ok!

What’s the protocol for easing back in?