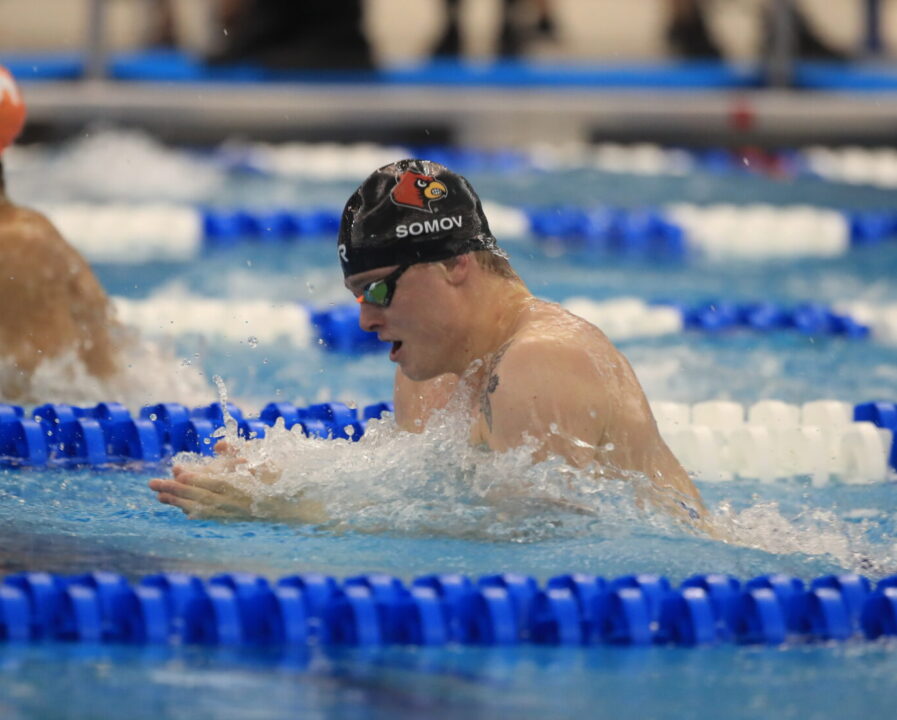 The Louisville men out touched Florida on Friday by one-third of a second to win the 200 medley relay, their 1st NCAA relay title and 5th NCAA title overall. Current photo via Carlos Morales/NCAA Photos via Getty Images

Louisville earned their first-ever men’s NCAA Championship relay title on Friday by touching the wall 1st in the 200 medley relay with a time of 1:22.11, simultaneously setting a new pool record.

Senior Evgenii Somov‘s 50 breast split of 22.87 was the 13th all-time fastest relay split in the NCAA. He gained the Cardinals a narrow lead over Florida and Cal that was held up by senior Nicolas Albiero on the fly leg (20.07) and sophomore Haridi Sameh on the free leg (18.45). Junior Mitchell Whyte led-off the relay with a solid backstroke split of 20.72, placing the Cardinals just behind Florida’s Adam Chaney.

The Louisville women have a total of 7 individual NCAA Championships titles spanning the years 2015, 2016, 2017, 2018 and 2019. While the Cardinal women broke their individual streak this year, this 200 medley men’s victory has made it so the Louisville men and women have won an NCAA title for 9 seasons in a row. Note that this streak excludes 2020 when the NCAA Championships were canceled due to the coronavirus pandemic.

Going into day 4 of the men’s NCAA Championships, Louisville is in 6th place with 158 points, just 8 points behind Indiana.

They were beating their heads off and screaming their chests after that win! So much fun to watch!