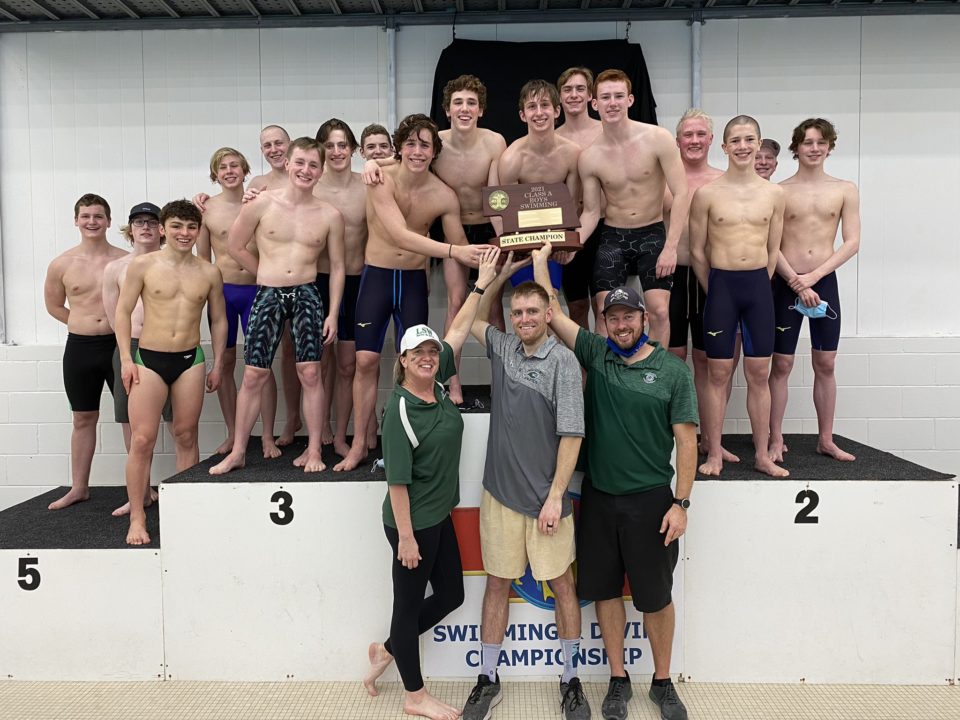 Lincoln Southwest got off to an early lead at the meet by winning the first three events of the meet.

That started with a victory by Mason Schroeder, Kael Mlinek, Tyler Reida, and Tommy Palmer in the opening 200 medley relay. Their time of 1:31.10 broke Creighton Prep’s State Record of 1:31.47 that was set in 2018.

Palmer, on a quick turnaround from that relay anchor, picked up the first individual event win of the boys’ meet in the 200 freestyle. Palmer swam a 1:39.89, which was 2.5 seconds faster than silver medalist John Galles who was a 1:42.24. Greg Wehbe from Elkhorn South also earned a spot on the podium, touching with a 1:43.06.

The path for Palmer’s title was cleared when Grand Island senior Jonathan Novinski, who was 2nd at last year’s state meet and the top returning swimmer in the event, swam just one individual event at the meet: prelims of the 500 free. He was the #2 qualifier in that event before scratching the final.

Palmer returned just 2 events later to swim the 50 freestyle, winning the event with a 20.04. That was more than a second quicker than teammate Ethan Reida‘s silver medal yielding 21.59 and Creighton’s Thomas Nissen who was a 21.64 for bronze.

Last season, as a sophomore Palmer won the 50 and 100 free. While he defended the 50 free, he opted to swap to the 200 free this season. He’s not totally unfamiliar with that event though – he won the race in 2019 as a freshman.

Kael Mlinek made it a sprint freestyle sweep  for Lincoln Southwest as he picked up gold in the 100 freestyle, which Palmer won last year. Mlinek was a 46.04 for the win, lowering his best time from a 46.25 which he swam in November. 200 freestyle silver and bronze medalists John Galles and Greg Wehbe swapped positions in the 100 as Wehbe claimed silver with a 46.81 and Galles was bronze with a 46.83.

Not done yet, Mlinek returned for the 100 breaststroke event and picked up a second gold medal. He swam a 55.09 to win the event and was followed by Mason Olmer from Norfolk for silver (56.71) and Drew Kaelin from Creighton for bronze (57.16).

That 200 IM was without Nate Germonprez of Omaha Westside High, who was the state champion in the race last season. Germonprez opted out of this year’s state meet.

With Novinski scratching the final, though, Watson’s biggest competition was absent, giving him some breathing room in that 500. The ability to take a bit off his finals swim was crucial, as he came back one race later to anchor Creighton Prep’s 200 free relay in 20.88. He held off Elkhorn South’s relay by just .05 seconds.

The only senior in the group was Austin Smith, who anchored in 46.41.

Mayo’s state title joins the family tradition: his older sister Lauren, now a freshman at the Colorado School of Mines, was the 200 free state champion in 2020.

Mlinek had the fastest split of that relay, cutting a 45.35 on Lincoln Southwest’s second-place effort.

Lincoln Southwest won their 6th of 7 event titles when Mason Schroder won the 100 back in 51.11. The school entered the meet with 6 event titles in program history, and they more-than-doubled that output on Saturday.