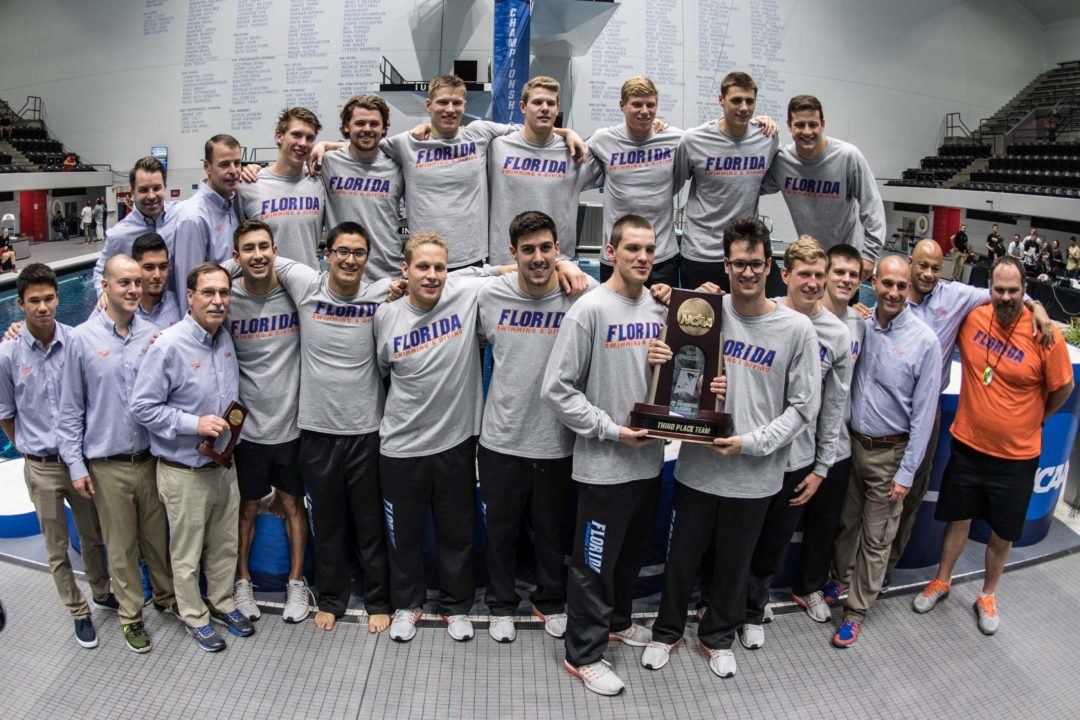 Florida hosted its first SEC meet of the season on Wednesday, as the Alabama Crimson Tide hosted the Gators in dual meet action. The defending SEC champion Gator men won a close battle with Alabama by 18 points, while the Gator women picked up a 28-point victory.

Gator freshman Taylor Ault picked up the first dual meet win of her collegiate career for the women. Her 16:44.84 was over 5 seconds faster than her time from the All-Florida Invite. Following closely behind was teammate Kahra Williams in 16:45.83.

Ault also took 3rd in the 500 free (4:57.12). Winning that race was Savanna Faulconer, who touched over 4 seconds ahead of anyone else in 4:50.98. Faulconer took 2nd in the 200 free (1:50.18) earlier in the session. She got off to the early lead, but was outpaced by teammate Kelsey Dambacher (1:49.27) on the back half. Faulconer closed the session with another runner-up finish in the 400 IM. She battled closely with teammate Kelly Fertel, with Fertel pulling narrowly ahead after the backstroke leg and extending her lead to win it in 4:14.04 to Faulconer’s 4:15.05.

The Tide’s Laurent Bams swam the first 100 breast of his collegiate career, dominating the 100 breast by over 2 seconds in 53.40. That made him the 4th fastest swimmer in program history. Bams later swam the 100 fly, touching in a 46.89 that would have placed 1st had he not been ultimately DQed. Florida’s Jan Switkowski won the event in 47.87, followed by Maxime Rooney in 48.45.

All-American backstroker Luke Kaliszak, one of the top contenders for the SEC and NCAA 100 back title this season, picked up a win in the 100 back. He used his front half speed to take the edge over teammate Christopher Reid, the 200 back SEC champ, and held him off to win it 48.25 to 48.82.

Khader Baqlah and Caeleb Dressel aided the men’s eight individual wins with first-place finishes of their own in the 200 free and 50 free, respectively. Baqlah swam a B-cut 1:36.92 in the 200 free, while Dressel posted a B-cut time of 19.10 in the 50 free.

Alex Farrow rounded out the individual wins for the Gator men, claiming first on the 3-meter board with a score of 322.20.

On the women’s side, the Gators collected nine individual wins, including two from sophomore Brooke Madden. She posted a score of 285.60 on the 1-meter and 296.40 on the 3-meter to sweep both events.

Closing out the women’s individual wins was Sydney Sell, who’s first win of the season came in the 200 back where she finished with a time of 1:59.50.

The Gators return to the Stephen C. O’Connell Center to face Georgia on Thursday at 6 p.m. and Friday at 10 a.m. Thursday’s session contains diving, while Friday’s contains both swimming and diving. The first 200 students to the O’Dome on Friday will receive a free pink T-shirt for breast cancer awareness.

TUSCALOOSA, Ala. – The Alabama swimming and diving teams battled to the end against the Florida Gators Wednesday afternoon, coming up just short in both the men’s and women’s meets. The Crimson Tide men fell 158-140, while Alabama women lost 166-134. It was the Southeastern Conference opener for both teams.

“While I’m not happy that we didn’t win the meets, I couldn’t be prouder of the effort from the team today,” UA head coach Dennis Pursley said. “They went toe-to-toe with one of the best teams in the country and really gave it their best shot.”

The Tide started the day by sweeping the men’s and women’s 400 medley relays. Senior Bailey Scott, juniors Justine Macfarlane and Katie Kelsoe and freshman Flora Molnar combined for a time of 3:39.57 to win the opening women’s relay. Senior Luke Kaliszak, juniors Laurent Bams and Robert Howard along with sophomore Zane Waddell claimed victory for the men with a time of 3:09.90.

The Tide closed the meet the same way they started it, winning the men’s and women’s 200 freestyle relays. Seniors Temarie Tomley and Lindsay Morrow, Molnar and Scott claimed the victory for the women with a time of 1:31.85. Freshman Jack Blake, Waddell, Bams and Howard combined for a time of 1:18.88 to secure men’s win.

“We raced hard and tough all the way to the very end,” Pursley said. “Even when it was clear that we were going to come up on the short end, they finished strong with a statement, winning those relays to end the meet.”

In between the relays, the Tide men tallied six individual wins while the women won five. Highlights include Molnar posting a 50.18 to become the ninth fastest 100 freestyler in UA history in just her second collegiate meet and Bams going 53.40 in his first collegiate 100 breaststroke to become the fourth fastest UA swimmer ever in that event. Molnar would go on to add a win the 100 butterfly (54.49) later in the meet.

Junior Robbie Costine and senior David Morton took first and second off the men’s 1-meter springboard. Costine took top honors with a score of 342.38, while Morton was second with a 281.63.

Alabama returns to action Friday, Oct. 27, traveling to Auburn, Ala. to take on the Auburn Tigers.

I love that Florida put their best kids in outside lanes the entire meet… Good strategy except it seems pretty weak. Thought Troy would want to go head to head.

Bama mens team trying to start “dont sleep on us” is gettig kinda sad but still funny. They lost huge contributiors with Oslin and Glokomeev, they brought in 30+ kids to try to develop but I havent seen many kids “develop” in alabamas program. They are either good or they arent and frankly I havent seen these underclassman do anything special. I hope to see something out of them this year, maybe they will focus on the womens team this year.

I don’t know, they look like they’re developing fine to me. That 400 MR is looking pretty good for this time of year. I also didn’t know Bams was a breaststroker.

Don’t wanna be that guy, but they brought in 24 swimmers this season, not 30+. I personally think their freshman breaststrokers are ones to watch…

Laurent Bams 53:40!? That’s a gamechanger. Huge for Alabama’s relays and maybe an individual all American

Makes me think he could crush a 500 FR

Not saying he’d be really elite-tier (or even *that* good), but he could definitely put together a very solid 500. If you think about the fact he was a 1:47 200 free LCM this summer, plus factor in the Gregg Troy training base, it’s certainly plausible he’d be a decent 500 swimmer.

He says he’s here that he’s willing to swim the 500 or the mile if it helps the team…I’d like to see it, maybe in the second semester when they get to see some daylight or at the rest meet before Thanksgiving, but they’re getting pretty beat up right now.
https://mobile.twitter.com/GatorsSwimDv/status/920794451554926592/video/1