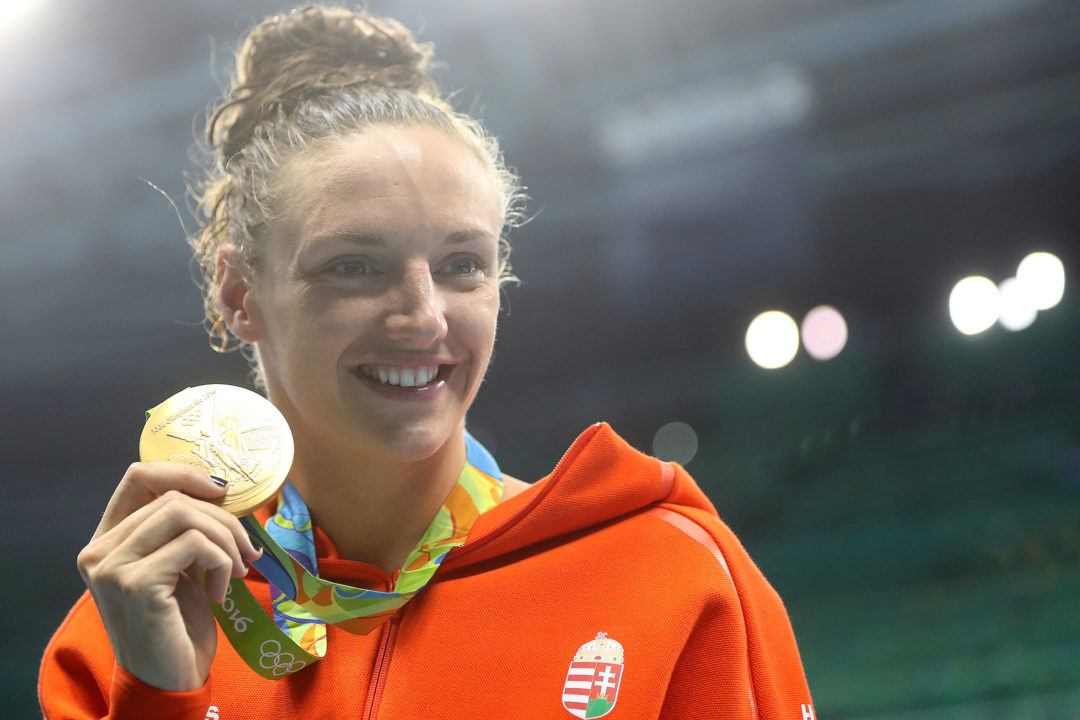 The Iron Lady is freshly motivated to continue her professional swimming career through the next two Olympic cycles, but plans to retire after 2024. Archive photo via Simone Castrovillari

How Do the French Feel About the Paris 2024 Olympics?

The IOC recently touted report showing overwhelming support for the next Summer Games, but another poll painted a different picture of approval ratings.

Are the 2024 Olympic ‘A’ and ‘B’ Cuts Closer Together Than They Were In The Past?

For Paris, the gap between the OQTs and the OCTs was just 0.5%, a significant drop from what the average distances had been in the past.

The IOC has announced at least 44 athletes in their initial list for the Paris Refugee Scholarship in preparation for the Paris 2024 Olympics.

The legendary “Iron Lady,” also known as three-time Olympic Gold Medalist Katinka Hozzsu has announced her plans to continue swimming competitively through the 2024 Paris Olympics in an interview with Origo Sport.

“I don’t really feel I’ll have enough of the sport next year,” said Hosszu, referencing the upcoming 2020 Tokyo Olympics, which will mark the fifth Olympics she’s competed in.

Hosszu’s swimming career has by no means been a smooth journey. After winning her first FINA World Championship title in the 400 IM back in 2009, Hosszu believed that the 2012 London Olympics would be her first real chance to become an Olympic champion, as she told NBC Sports. That meet would end in a disappointment for the Hungarian phenom, as she wound up 4th in the 400 IM final, and finished 8th and 9th in her remaining events.

After London, Hosszu critically questioned her future commitment to the sport, unsure if she even wanted to continue swimming. But with the help of her future husband and coach Shane Tusup, Hosszu returned to competition later in that year with an emboldened level of versatility, eventually earning her the nickname of “Iron Lady.”

From that point on, Hosszu intended to fully commit to competing through the next Olympic cycle. Instead of training under the direction of her college coach Dave Salo, her then-boyfriend in Tusup would become her new coach. She later became married to Tusup in 2013, and their professional relationship continued.

Hosszu would go on to win three gold medals at the 2016 Rio Olympics, setting a new world record in the 400 IM in the process. In the same year, she and Tusup started their own swim club in Hungary called Iron Aquatics, and their Iron Lady merchandise line was also generating success.

After Rio, Hosszu made a number of out-of-pool splashes. In November of 2016, Hosszu called for the resignation of the President of the Hungarian Swimming Federation, citing issues with the ways the President as well as the Federation itself has treated the athletes – particularly addressing the insufficient amount of support being provided.

In the winter of 2018, Hosszu alongside Tom Shields and Michael Andrew, filed a lawsuit against FINA for breaching anti-trust laws in blocking the International Swimming League’s (ISL) Energy for Swim Meet, which would eventually be cancelled. Hosszu has been incredibly supportive of the ISL, arguing that they “take swimmers seriously, unlike FINA.”

Later in 2018, Hosszu announced that she would no longer be training under her husband Tusup, although she planned on continuing training and competing. Around that time, Hungarian media outlets reported that Hosszu had filed for divorce, on top of testifying against him in court during a wrongful termination suit by a former coach at Iron Aquatics. Hosszu officially filed for divorce in February of 2018.

Despite having been in the international spotlight for quite a long time, Hosszu has continued to find success in the pool. Most recently, Hosszu won six individual events along the first two stops of the 2019 FINA Champions Swim Series. With her recent announcement of wanting to train through 2024, it appears that she’s excited about and confident in her professional trajectory.

Additionally, back in February of this year, Hosszu was named the owner of Team Iron, one of the ISL’s professional swim teams. She’s also started her own swim school in Budapest called the Iron Swim School to further immerse herself in ventures outside of racing.

Hosszu further explained to Origo Sport that: “When I decided to change direction, the world suddenly opened up and the possibilities started to flow in. Continuing to swim while also building a brand and doing the League, school and club wasn’t a conscious decision.”

These comments are ridiculous. Give her respect, she’s done what most others weren’t capable of doing, she’s made a career out of it and is building her own little empire and she’s not done yet, ISL could be very profitable for her. Swimmers owe her and others for leading the way and blazing this new path with ISL. Much respect Katinka.

Something tells me she will be doing the 400 IM at the Mars Olympics.

If you are beginning to hear voices it is a good time to seek for professional help. 😀
You know of course that there is no water on Mars.

There is water on Mars frozen below the surface.. Might be enough for one pool.

Sorry to inform you, but Katinka did not place 3rd in the 400mIM at the London Olympics. She placed 4th.

Wait… so she’s back on the market👀

Well, Yozhik will be happy.

Why should i explain English to the person who has it as the first (and most likely the only) language?
Read carefully the title of the article: “..plans to continue SWIMMING..”
Not winning, not competing but just swimming. Well, good for her that she isn’t that iron to sink like a stone. 😀

To all SwimSwammers: join me as chartered members in the YOZHIK FAN CLUB. I don’t always agree with his “takes,” but he’s lively, fresh and opinionated, and keeps the conversation moving. Are you in? (How about you, Steve Nolan?)

I intentionally misspelled the name. You should appreciate this kind gesture.

Uh, read the first sentence. Here it is — in English — so you don’t have to search: “announced her plans to continue swimming competitively through the 2024 Paris Olympics.”

It’s either I missed it or this sentence was edited later. Anyway it is still not clear who she is going to COMPETE against. Hopefully the Olympics in Paris was meant implicitly.
I remember the interesting explanation given to Mr. Craig Lord by Mr. Reiz about sudden unstoppable acceleration in improving of personal bests of Katinka Hosszu at a very unusual age. It was that Hosszu possesses the special “hard working” gene that only Hungarian swimmers have. There is probably one more that he missed to mention. The one that is responsible for staying at elite form infinitely. Maybe it’s time for Hosszu don’t be selfish and to think about passing such a treasure to the next generation so… Read more »

As I remember Mr. Craig Lord had to shut off swimvortex server perhaps because of theese objective dictums, too 😉

He wasn’t up to the level of the greatest community he created unwillingly. Don’t you miss it?
He demanded money for membership and that killed the business. But I wasn’t talking about him but about shocking revelation from Hungarian swimming expert.

The Paris Olympics was meant explicitly in the interview.

Do you think that for the next five years Hungarian girls stop swimming and there will be nobody but “Old Lady” Hosszu to represent Hungary in Paris? All these talks about Paris is a selling another b.s. à la Missy Franklin to keep public interest in her.
I think she will have problem to qualify for Tokyo next year unless Hungarian swimming federation follows example of Russians in the case with Efimova selecting her over better swimming but young and without connections Evgenia Chikunova in 200BR.
But what can I tell, it looks like any product can find own buyers.

It is indeed to early to speak seriously about Paris. As for Tokyo, Hosszu had a lesson of missing the 2019 Worlds in 200 fly, but shall have plenty of opportunity until Tokyo. If she is a medal contender then she must get into the two in Hungary. BTW the strict limit of two swimmers is a stupid rule. Not talking about Hosszu, it is nonsense that the third best of the world may be denied participation. If I were FINA or IOC I would introduce an A+ level (say 59.0 in 100 back) and countries having three A+ swimmers were allowed to send three.This would mean only a handful more participants.

I agree with that 100%. Track allows 3. Swimming used to and it was scaled back in the 70s due to US domination. However it’s been much more competitive in individual events the past coupe decades. Only the odd event would there be even a chance of 3 in the top 5 let alone a sweep from any one country (US take your pic, Aussie female sprinters, Jap breast…).
That Emma McKeon was a 52 100 Freestyler and couldn’t compete in Rio was disheartening. I want to see THE BEST compete at the Olympic and world champs. An A+ top 8 type standard should be in place. Only a handful extra bodies would qualify but they’d all be medal… Read more »

lol…nobody i mean nobody can win against katinak in the 400 im….