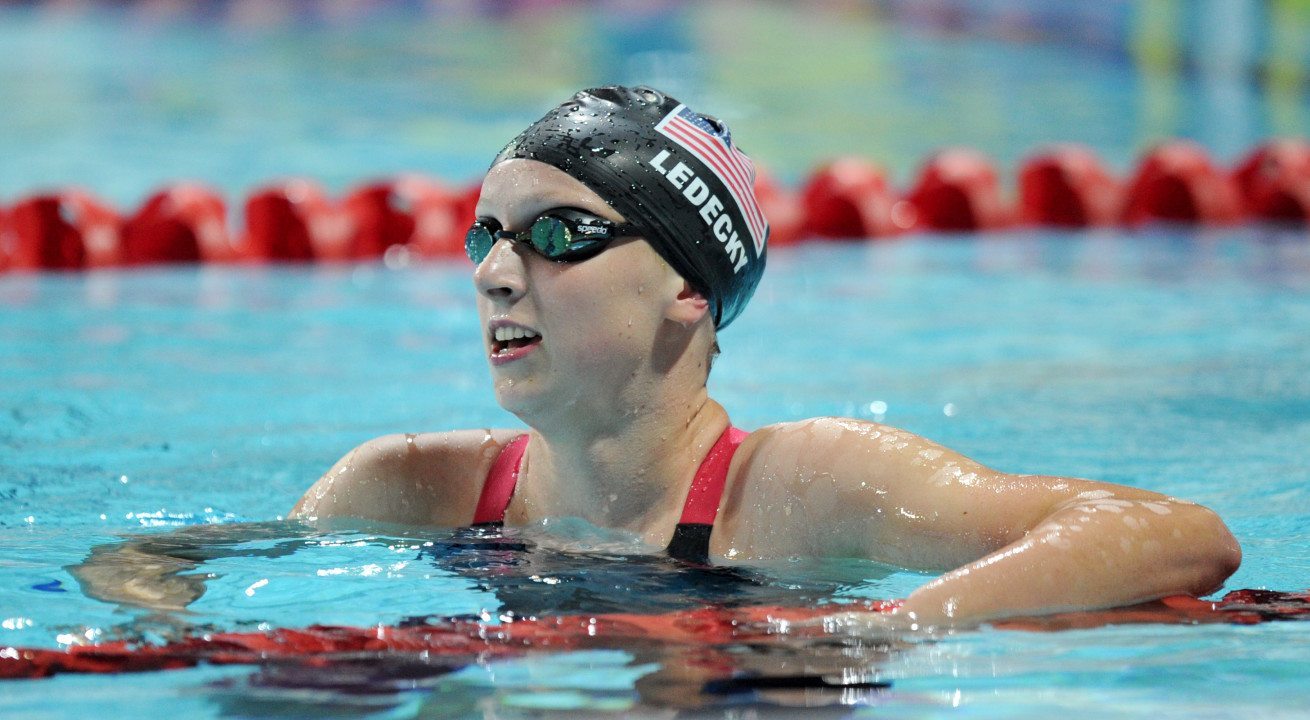 American Katie Ledecky has crushed her own World Record in the women’s 1500 meter freestyle on Saturday at the 2014 Pan Pac Championships on the Gold Coast, Australia.

As we’ve seen from Ledecky all meet long, en route to two World Records, the difference here came almost entirely on the back-half of her swim. As compared to her old World Record splits, on Sunday she was out in just 8:16.90, as compared to 8:16.18 in the Woodlands in June.

That is now 7 times in the last three years that Ledecky has broken a World Record, out of 25 total World Records broken across the sport, meaning she’s done 28% of the rewriting in that time period.

What’s more, her best 800 meters worth of splits add up to an 8:10.99 in the 800 free – under that World Record. That won’t count as anything official, with those splits not being her first 800 meters. Those sorts of comparisons are more fun than a realistic representation, as for athletes of her caliber, there’s some small amount of recovery even on a 31.3 or 31.4 seconds split (as mind-boggling as that is to the rest of us). That doesn’t make them any less impressive.

Early in 2013, before Ledecky first broke this record, Kate Ziegler’s 15:42.54 looked like one of the most impressive World Records on the books. It broke an almost 20-year old record, held by Janet Evans, by 10 seconds, and then stood up against the 2008 and 2009 suited years.

In 13 months, however, Ledecky has lowered it by another 14 seconds, or roughly 1.5% of the original time. That would be the equivalent of someone popping off a 46.2 in the men’s 100 free, in textile, on a flat-start: something we may not see for a long, long time in swimming.

i think her times are nearing “unbreakable” territory

KeithM – finish reading the sentence. I know you can do it, just have to move your eyes a few more inches.

That’s because there is a 100 meters overlap, they mentioned it.

I read the caption under the pic and then posted. Sorry couldn’t resist.

I guess writing 750 meters doesn’t sound as nifty and doesn’t have a reference point as a racing distance.

I haven’t found any race video of it yet, I would love to see that. UNBELIEVABLE.
6 seconds off her own WR, like last year in Barcelona, she’s about 30 seconds ahead of anybody this year in the 1500.
She well might become the greatest ever.

I would be nice to get the entirety of the race too rather than an abbreviated version.