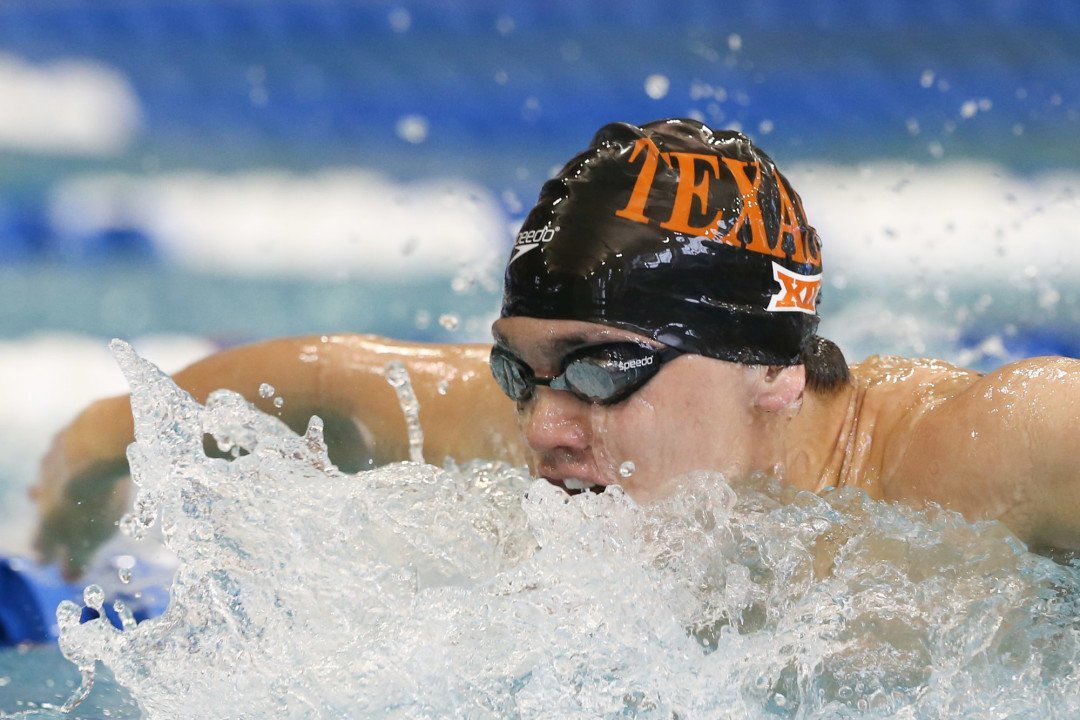 Swimming fans will miss out on a Joseph Schooling vs. Jack Conger battle in the 200 fly in tonight's finals session at the 2017 Big 12 Championships, as Schooling has scratched out of finals. Archive photo via Tim Binning/TheSwimPictures.com

Swimming fans will miss out on a Joseph Schooling vs. Jack Conger battle in the 200 fly in tonight’s finals session at the 2017 Big 12 Swimming and Diving Championships in Austin, Texas. According to the heat sheets for tonight’s session, Schooling has scratched out of finals, bumping Conger up as the top seed. The 2 Longhorns went 1-2 in this event atlast season’s NCAA championship meet, with Schooling breaking the NCAA Record and Conger breaking the American Record.

Schooling’s performances at this meet bode well for the upcoming NCAA championships next month. Florida’s Caeleb Dressel established himself as Schooling’s biggest contender in the 100 fly when he turned in an unshaved 44.2 at the SEC Championships, but Schooling bettered that last night with a 44.06 in the Big 12 100 fly final. That was just 5 hundredths shy of the 44.01 he swam to win the NCAA title last season. In March, Schooling could potentially become the first swimmer in NCAA history to swim a 43-second 100 fly.

He just scratched because he’s afraid he might lose to Jack for once if he swims it.

Or maybe because the competition it’s not good enough for him, and he doesn’t want to make Conger look bad… again. 😉

It may be that they are going to put schooling in the 50 free instead of the 200 fly at NCAA based on his time at the big 12. Has anyone else in the country even broken 19 this year besides Dressel?

Even without Schooling, Texas is still the favorite to win the 200 fly at NCAA with Conger.

I wonder if he’s just saving his energy for the 4×100 tonight. He’ll probably try and lead off and get a good one in to see if it’s worth giving the 100 a try at NCAAs. I still think he should stick with the 200 Fly at NCAAs for day three, but it’ll be interesting to see how competitive he would be in the 100.

Going for the 100 free record on relay lead off. Confirmed.

Schooling is scared of the 200 fly.