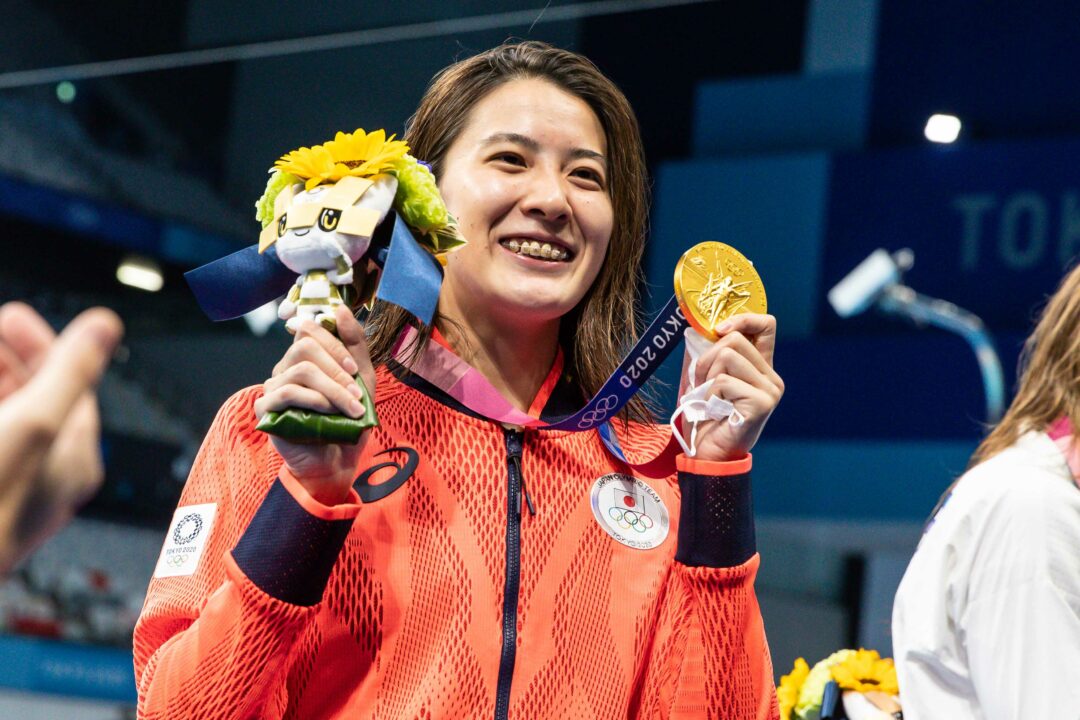 Another notable IM swimmer who has covered Vogue is American Olympic champ Ryan Lochte who was featured in 2012 alongside fellow Olympic gold medalists Serena Williams (tennis) and Hope Solo (soccer). According to Cut, Lochte was the 4th man in history to be on the cover of American Vogue, following Richard Gere (1992), George Clooney (2000), and Lebron James (2008).

Ohashi certainly fits the bill as a prominent figure in Japan, having recently won two Olympic gold medals at the nation’s home Olympics. Ohashi raced her way to the top of the podium in both the 200 and 400 IMs, delivering a 2:08.52 and 4:32.08, respectively.

Ohashi was one of Japan’s two swimming medalists at Tokyo 2020 along with Tomoru Honda who took silver in the 200 butterfly (1:53.73). She contributed two medals to Japan’s 58-medal total, 27 of which were gold. Japan finished 3rd overall on the medal table at the Games to the USA (113 total medals) and China (88).

In the wake of her Olympic success, Ohashi became the first-ever Japanese female swimmer to turn professional and just the fifth-ever professional Japanese swimmer in history. The impact of turning pro as a Japanese swimmer is that Ohashi is now responsible primarily for her expenses related to training and competing. The upside, however, is that she will have the opportunity to make money via commercial ventures.

As one of her first commercial ventures, Ohashi became a member of Team Seiko in April 2022.

In addition to her Olympic medals, Ohashi has swum at a high level for several years and has landed on the podium at many international meets. She took silver in the 200 IM at the 2017 World Championships, bronze in the 400 IM at the 2019 Worlds, gold in the 200 and 400 IM at Pan Pacs in 2018, and another set of double IM golds in 2017 at the FISU Summer Universiade.

Ohashi is set to defend her Olympic titles later this year at the 2022 World Championships in Budapest. She’s automatically qualified to race her signature events this summer for Japan, courtesy of her victories last summer. Ohashi recently raced to victory in the 200 IM at the 2022 Japan Swim with a 2:10.70 and placed third at that meet in the 400 IM with a 4:41.96.

There is a new sheriff in town by the name of Alex Walsh. Well not new, but you know what I mean.

She beat Walsh in Tokyo

Don’t forget about Kaylee McKeown. In the recent lengthy YouTube interview with Brett Hawke she described the 200 individual medley as her favorite event and says she is working toward something like Emma McKeon…winning 7 medals in one Olympics. Kaylee said she watched the 200 medley final in Tokyo with a feeling that she could have been there. She’s racing both individual medleys at Australian trials. Very good interview overall. Lots of discussion of backstroke technique. Kaylee said butterfly is by far her weakest stroke right now.

At a home Olympic Games starving for winners in the pool, and with all eyes on her, she delivered. Twice.

Even if Alex wins in Paris, she will never swim under the same pressure Yui did in Tokyo.

Especially since our mens team weren’t performing as well in relation to their expectations, that placed more pressure on her. She pulled through twice. Legend

She’s also not standing head and shoulders above everyone else in talent like a Ledecky or Peaty. She won those by executing a perfect race under enormous pressure. They were fantastic swims.

So goofy. So silly