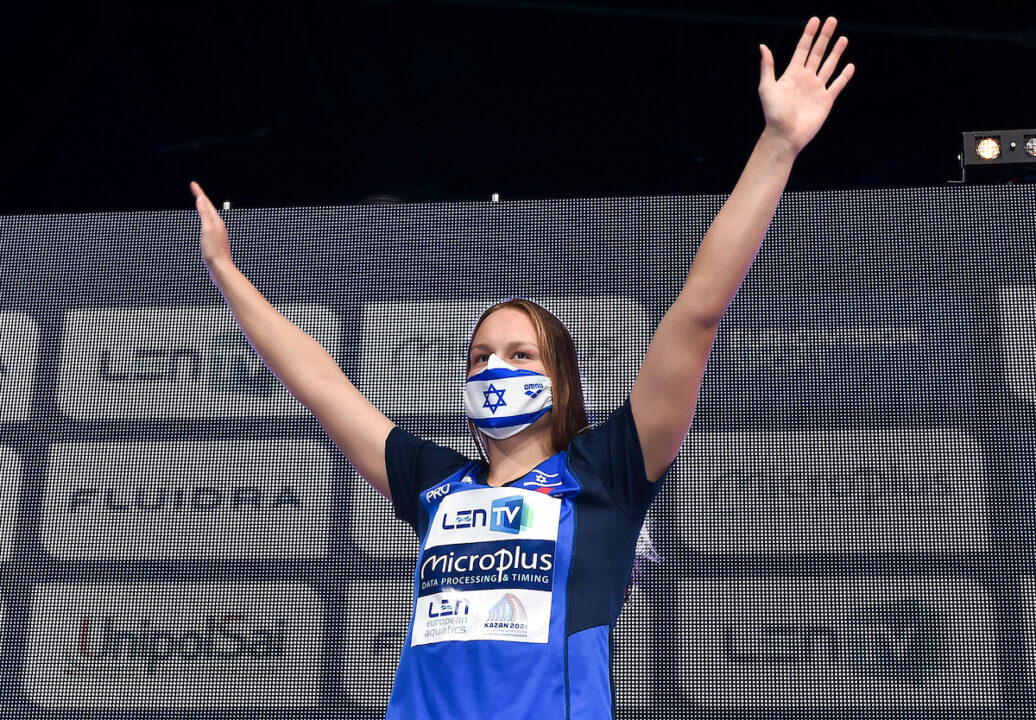 Anastasia Gorbenko, Israel's only finalist in pool swimming at the Olympic Games, leads a roster of 14 to this summer's World Championships. Archive photo via Andrea Staccioli / Deepbluemedia / Insidefoto

The Israel Swimming Association has announced a 14 swimmer roster for the upcoming World Championships. The 2022 event will be held from June 18-July 3 in Budapest, Hungary, with the swimming portion running from June 18-June 25.

The roster includes 4 women and 10 men and is one more in each gender than the record-setting 12 swimmer roster that they sent to last summer’s Olympic Games – Israel’s largest-ever Olympic roster in swimming.

10 of the 14 swimmers headed to the World Championships were on that Olympic Team.

Yakov Toumarkin from the men’s team and Andi Murez from the women’s team are the Olympians who will be absent from this year’s World Championships. Toumarkin swam last weekend at a local meet in Netanya where his times of 55.13 and 2:00.12 in the 100 and 200 back were both well short of his personal bests.

Murez has not raced since the ISL regular season concluded in September. Murez, who was raised in the United States, has begun medical school at Tel Aviv University. Last week, she received that school’s first-ever athletic scholarship.

Israel only had only one pool swimmer qualify for a final at last summer’s Olympic Games. That was teen sensation Anastasia Gorbenko, who finished 8th in the 100 back and 10th in the 200 IM in Tokyo.

The country’s top swimmer, she broke her most recent National Record in the the 50 backstroke last weekend in 27.87 at the country’s final qualifying event. She also broke the 50 breaststroke at the Stockholm Swim Cup in April, touching in a time of 30.45. Those are the country’s only long course National Records for women since the Olympic Games.

Several short course records have been set, however, as has a long course men’s record. The country’s breakout swimmer of the European Short Course Championships in November was Kristian Pitschugin. He finished 9th in the 50 breaststroke and 20th in the 100 breaststroke at that meet, both of which are new National Records.

Last weekend, he swam a best time in the long course 100 breaststroke of 1:00.37, which is also a long course National Record.

Among those racing at the World Championships will be the entirety of the men’s 800 free relay roster that was 10th at the Olympics in a new National Record of 7:08.65: Gal Cohen, Tomer Frankel, Denis Loktev, and Daniel Namir.

Israel has never won a medal at the FINA World Aquatics Championships in any discipline.

Israeli Roster for the 2022 World Championships

Do we know what eventd they’re swimming?

Very solid team. Excited to see if they can bring home some hardware at worlds.

You missed Aviv Barzelay who also advanced out of the prelims in Tokyo. She finished 15th in the 200 back.
Also, Pitschugin’s 100 breast swim was a National Record.

Pitschugin is a Georgia commit, Goldfaden swam collegiately for South Carolina (was a SEC champ in the 100 breast) and Cheurti & Gorbenko train regularly with Swim Elite, so all but Golovaty (who is 17) have a connection to the US 🙂

And forgot to add that Gorbenko also swam 27.87 in the 50 back which is also a NR

Thanks, don’t know her exact DOB. I was going by her birth year (2005) which is what FINA uses for WJR and wha the Israeli Swimming Association is using for age group records.

Their 4IM finalist at SC worlds did not qualify?