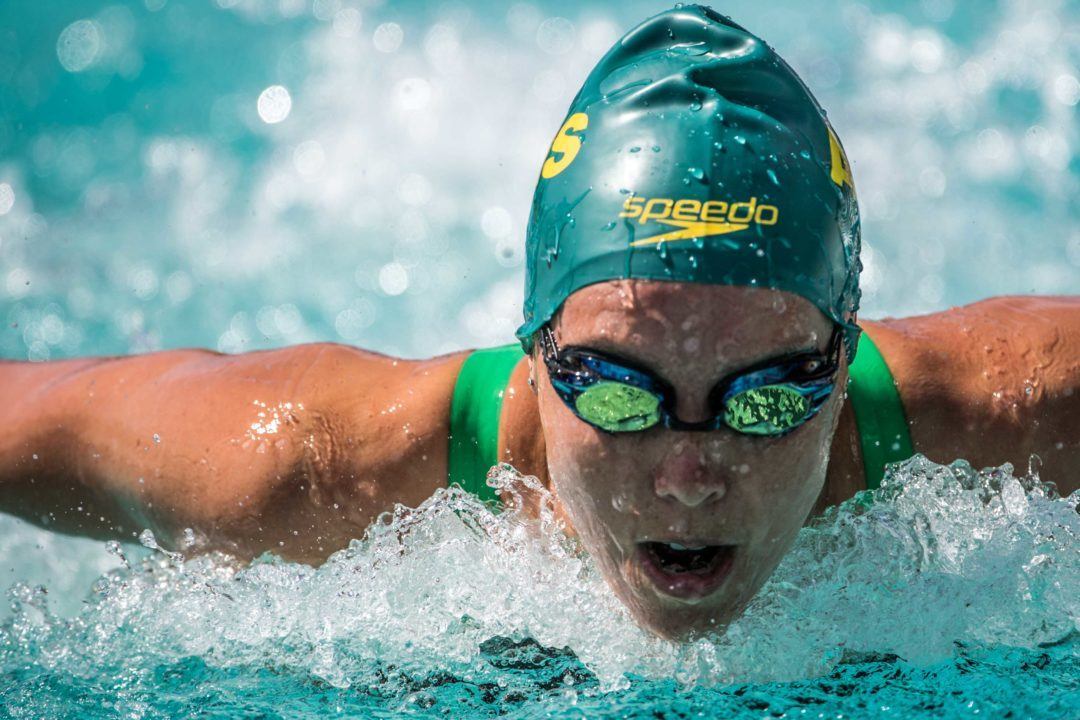 The London Roar has had a flashy day one, putting themselves in a comfy lead over the LA Current in Lewisville. Stock photo via Mike Lewis/Ola Vista Photography

Team Scores After Day One- Lewisville

The Group B teams of Iron, LA Current, London Roar, and NY Breakers have made their first ISL splashes in Lewisville, TX. So far, the London Roar hold a 19-point lead over the LA Current. Meanwhile, Iron and the NY Breakers are in third and fourth, respectively.

Peering into the MVP rankings, Iron’s Vlad Morozov leads by a half point over London’s Emma McKeon. Morozov took two wins in the 50 breast and 50 free as well as put in relay efforts for Iron in the medley relay (5th) and free relay (3rd).

McKeon, on the other hand, was entered in only three swims in contrast to Morozov’s four swims on day one. McKeon won two individuals, the 100 fly and 200 free, for the Roar while contributed to the winning women’s 400 free relay.

With one group’s competition bout completed and a new group in the water, we now have a basis for which teams are starting off great and which are not. Below is a breakdown of Group B’s day one scores in comparison to Group A’s day one scores from their inaugural meet in Indy.

The lead that the London Roar has built over the LA Current is somewhat related to the battle between Energy Standard and the Cali Condors in Indy. Iron and the NY Breakers are secluded in their own spots in contrast to DC Trident/Aqua Centurions’ 1.5-point separation after day one in Indy.

The London Roar came to Texas and roared, picking up 10 total event wins. The team also had two of day one’s three double-event winners, Aussies Emma McKeon and Minna Atherton. McKeon took the first win of Group B’s two-match competition bout in the 100 fly. Later in the second session, Atherton came out on top in a dominant 200 back performance, frightening the Australian national record by a second.

McKeon and Atherton’s second wins came in an eye-popping 6-event winning streak from the Roar.

A friendly reminder that the team is swimming this well even in the absence of Adam Peaty, James Guy, and Duncan Scott. Russian Kirill Prigoda and Aussie Matthew Wilson pulled through in the 50 breast, picking up 11 points total in the 50 breast. Aussies Kyle Chalmers and Alexander Graham also represented well in the 50 free and 200 free, respectively.

The NY Breakers had a tough performance on day 1, resulting in a 55-point gap behind the 3rd-place Iron. The Breakers suffered five point deductions due to failure to hit the minimum time standards, along with 8 eighth-place finishes.

Team captain Michael Andrew was entered in five events, and experienced the misfortune of unexpected quick turn arounds. Andrew was put in the 100 fly and 50 breast, two events that the 20-year-old performs well in. After taking a respectable 4th place in the 100 fly, Andrew then had a quick 3-minute turn around into the 50 breast. As a result, Andrew’s fatigue set in the last 10 meters and finished in 7th place. He followed up with a 4th place finish in the 50 free.

While the team had faced trials, there were stand-out swims that powered the team. The first was in the women’s 400 free relay, where the quartet of Olympic champion Pernille Blume, sisters Catie DeLoof and Gabby DeLoof, and clutch Aussie relay swimmer Madison Wilson teamed up for a third place finish behind the London Roar by six-tenths.

The female breaststrokers on the team, Emily Escobedo and Breeja Larson, had amazing combined efforts to contribute 23 points total from the 50 and 200 breast. Larson finished second in the 50 breast, right behind world record-holder Alia Atkinson from Iron. Then, Escobedo had a valiant race with LA’s Annie Lazor to get second place by one one-hundredth.

While probably the weakest roster in this group, the roster isn’t as bad as their results – many of the Breakers’ swimmers simply aren’t swimming that well by their own standards.

In the middle of the Group B quad are the LA Current and Iron, who both have unique event strengths. However, where one team strives, another team does not.

In the case of relays, the LA Current put together great relays that showcased their deep roster. The women’s 400 free relays finished 4th and 5th, which combined for 18 points total. In both the men’s medley and free relays, there were many swimmers who can accomplish the 100 stroke/free double.

For the Iron squad, their swimmers, who are very talented, generally excel in non-relay events. In the women’s 400 free relay, the Iron team suffered 6th- and 8th-place finishes. Meanwhile, the 7th-place men’s free B-relay threw in three backstrokers alongside versatile flyer Kristof Milak.

However, like any other team, if their relays don’t make the cut, they then rely on their talented individual event swimmers.

There are tons of events where one team can pick up more points and one where a team needs to get back on track. Yet the 50 free skins event is where the points matter most, as the top two finishers will score 27 and 21 points respectively.

This event is Michael Andrew‘s time to shine for the NY Breakers. While he has pulled off amazing feats of back-to-back events at top-level meets, the 50 free skins event is specifically designed to showcase anaerobic endurance.

With Andrew’s USRPT training, his ability to maintain speed while battling off lactic acid should allow him to score big. However, as mentioned above, he hasn’t been good at this meet – even, for example, in the opening 100 fly, where there should have been no fatigue factor. Along with Andrew, the Campbell sisters and Kyle Chalmers from the London Roar should represent well with their spectacular freestyle proficiency.

There are a ton of sprinters capable of taking the Skins titles here in Lewisville, with a much deeper group than we saw over the last two weeks in Group A. That includes names like Breaker Pernille Blume, Iron’s Ranomi Kromowidjojo and Vlad Morozov, LA’s Nathan Adrian, and London’s Bruno Fratus.

I’d put my money on Chalmers and C1 for the skins.

I agree the dynamic between LON and LAC is a bit similar to ENS and CAC in their first match but that could be where the similarity stops because in the second match CAC added Dressel allowing them to narrow the lead while it will be LON, not LAC, strengthening their team with the Brits which could allow them to pull away.

Anyway this could be a little premature given there’s another day to go. Hoping Roar can maintain their lead. 🤩