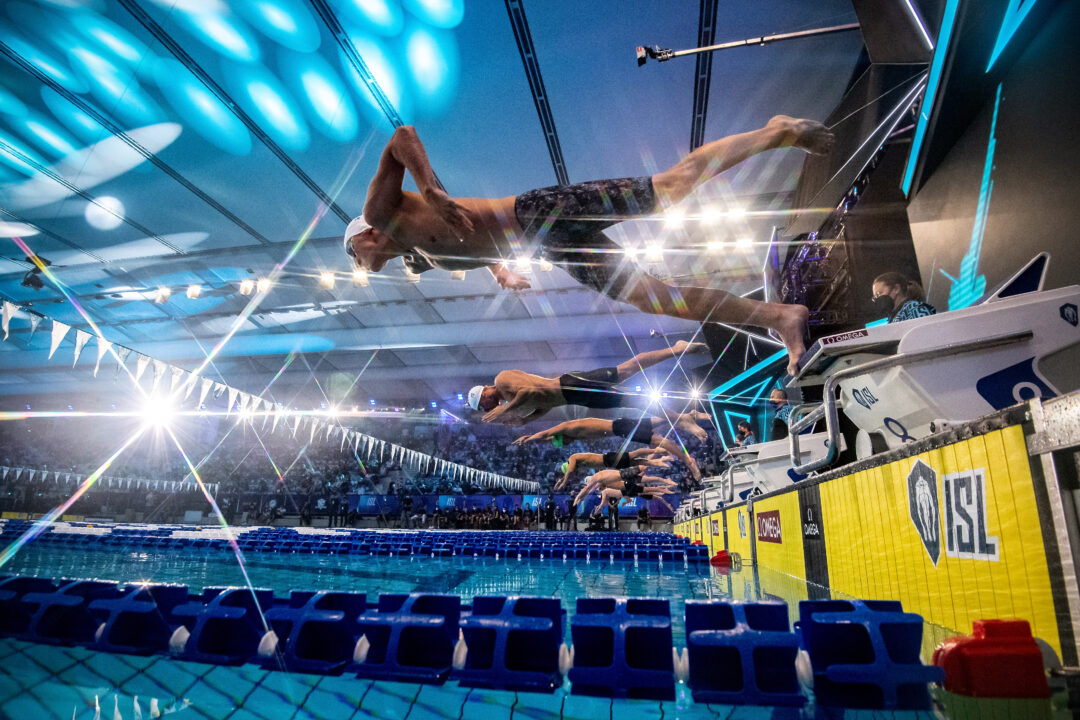 The ISL will notably offer 'PRO' swimmers a bonus is they don't compete at the 2022 FINA World Championships. Archive photo via Giorgio Scala / Deepbluemedia / Insidefoto

The International Swimming League (ISL) has released further clarification on the rules and restrictions swimmers will be subject to if they opt to be either a ‘PRO’ or ‘Semi-PRO’ in its upcoming fourth season.

On Feb. 7, the ISL announced that athletes would be given the ‘pro’ or ‘semi-pro’ option in Season 4, with a variety of requirements and benefits attached to both.

In the time since, FINA has announced a new 2022 World Championship meet in Budapest, with some of the dates conflicting with the ISL’s regular-season schedule. As a result, the ISL has made a few amendments to the ‘pro’ and ‘semi-pro’ distinctions.

As previously announced, the ISL’s ‘pro’ category offers swimmers a salary and requires them to be committed to racing for their club for the entirety of the season while restricting them from competing in certain commercial competitions that aren’t designated by the league as ‘Tier-1.’

One very notable change the ISL has made in light of the Worlds announcement is that ‘pro’ swimmers can now race in commercial, non-Tier 1 competitions provided they can prove to the ISL they’re required to attend the event as part of the preparation program of their national federation.

An example of this would be swimmers racing with their national federation at the Sette Colli Trophy or Mare Nostrum Tour as prep for Worlds or European Championships. The ISL reserves the right to determine which meets fall within those guidelines.

The league also notes that the restriction on competing in outside commercial events for the ‘pro’ athletes only exists during the season, so they’re free to compete anywhere prior to June 1.

The ISL has also added a “100% super-bonus” for ‘pro’ swimmers that don’t compete at the World Championships, on top of their original salary. Swimmers who do attend Worlds won’t see any changes to their compensation.

The rules for the ‘semi-pro’ option remain unchanged from the earlier announcement. Swimmers can miss up to three matches during the regular season and one during the playoffs, and face no restrictions in regards to racing in outside commercial competitions (save for the date restrictions, see below).

However, they will not receive a base salary, but will be eligible for all of the same racing bonuses and prize money that the ‘pro’ is.

The ISL has provided specific dates where ‘semi-pro’ swimmers can race in external competitions. If a swimmer’s club qualifies for the Grand Final, they’ll be eligible to race in outside competitions on the following dates:

Maybe if you paid the athletes more (or at all) this won’t be a problem and they won’t want to skip meets.

No more promises please. Pay the athletes or shut up.

I won’t watch another single race of this circus.

19
-4
Reply
Grimes/McIntosh combo is the future

You‘re talking about bonuses and Peaty said 2 months ago that he’s still waiting for his money from season 2.
Looool 🤣🤣🤣🤣🤣🤣

Bruh they gotta be smoking 😂😂. No one is doing this, this the death of ISL unfortunately