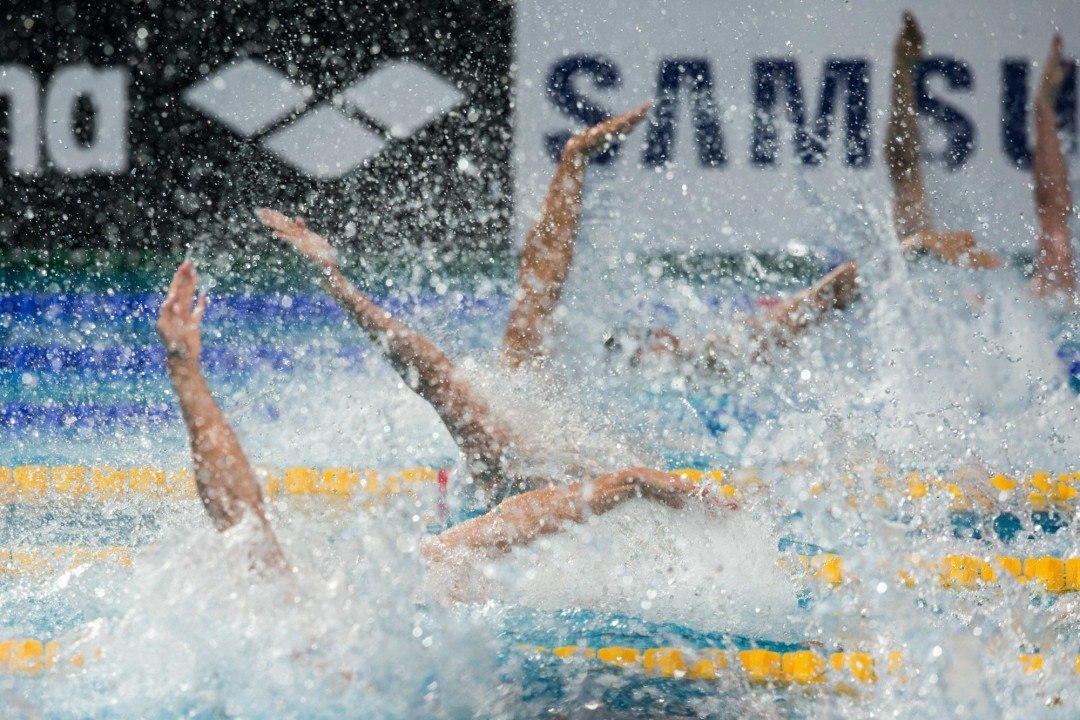 Brazilian newcomer Gabriel Fantoni blew away the field in the 100 back, winning by over 2 seconds in 46.86. Stock photo via Tim Binning/TheSwimPictures.com

World Champion Lilly King pulled off a winning triple on Saturday as the Indiana men and women dominated Purdue at home while celebrating senior day. King swept her specialty breaststroke races, turning in winning times of 1:01.36 in the 100 and 2:10.61 in the 200. She also won the 200 IM in 2:01.29. King’s time in the 200 breast was just a half second shy of her season best, which stands as a 2:10.13 from the Hoosiers’ meet against Tennessee and Kentucky.

BLOOMINGTON, Ind. – The No. 3/7-ranked Indiana University men’s and women’s swimming and diving teams completed an impressive sweep of Purdue on Senior Day Saturday afternoon in front of a capacity crowd at the Counsilman-Billingsley Aquatic Center in Bloomington, Ind.

With the two victories, Indiana takes the lead over Purdue in the Governor’s Cup, 4.5-3.5. The overall winner of the contest will be awarded a trophy at the end of the season. Each sport can earn one point toward the overall championship. A total of 19 or 20 points can be won, depending on the number of meetings between the teams in various sports.

For the IU women, senior Ali Rockett won a pair of events – the 100 backstroke in a NCAA B cut of 53.13 and the 50 freestyle in 23.13. In the diving well, Jessica Parratto took first in both events, winning with NCAA Zones qualifying scores. The redshirt junior placed first in the 1-meter with a score of 345.45 and the platform with a season-best total of 350.33.

In the 200 medley relay, the Hoosiers earned a sweep. On the women’s side, the team of Ali Rockett, Lilly King, Christine Jensen and Grace Haskett won with a time of 1:38.57. For the IU men, the team of Gabriel Fantoni, Ian Finnerty, Bruno Blaskovic and Blake Pieroni touched the wall first with a mark of 1:27.54.

In the final event of the afternoon, the Hoosier men’s 400 freestyle relay of Nikola Miljenic, Vini Lanza, Oliver Patrouch and Josh Romany won with a time of 2:59.81.

The No. 3/7 Indiana Hoosiers will return to the pool on Friday, Jan. 26, when the team heads south to face the No. 14/8 Louisville Cardinals in Louisville, Ky. The meet is scheduled to begin at 2:00 p.m. ET.

Kaersten Meitz and Danielle Auckley teamed up to help the Purdue women win five of the six freestyle events, all but the 50. Meitz swept the 200, 500 and 1,000 free vs. IU for the second year in a row. Auckley was victorious in the 100 free against the Hoosiers for the second consecutive season as well. They teamed with Jackie Smailis and Megan Johnson to make the Boilermakers a winner in the 400 free relay to close the dual.

Taite Kitchel won the 200 butterfly, went toe-to-toe with Olympian Lilly King in the 200 individual medley and posted an NCAA provisional qualifying time (B Cut) in all three of her individual events. Kitchel and Meitz have won an individual event at all six of the Purdue women’s dual meets this season.

Brandon Loschiavo (platform diving, 482.25) and Nick McDowell (1,000 free, 9:12.87) accounted for the Purdue men’s event victories Saturday. Both posted team season bests. Loschiavo was victorious by 61 points as the only Boilermaker in the event, improving on his third-best score in program history. McDowell’s mark was just six hundredths of a second off of his sixth-best time in program history.

Morgan Meixner posted career-best scores in both springboard events, winning the 3-meter exhibition. Her scores of 320.93 on 1-meter and 340.88 on 3-meter were both Purdue season bests, moving the junior into 9th and 11th place in program history.

Marat Amaltdinov posted B Cuts in both breaststroke events, but did not win the 200 breast at a meet for the first time this season. Indiana’s Ian Finnerty ended Amaltdinov’s streak (they finished 1-2) while sweeping the breaststroke events. Trent Pellini was Purdue’s top finisher in the 100 with a B Cut time of 55.09. Jinq En Phee (1:02.35) posted a B Cut in the women’s 100 breast.

Kitchel won the 200 fly by more than two seconds, posting a B Cut time of 1:58.01. King out touched Kitchel by 11 hundredths of a second in the 200 IM in what proved to be the most exciting finish of the day.

The Boilermakers close out their dual meet schedule next weekend at the annual Big Ten Triple Duals vs. Minnesota and Northwestern. The Gophers are hosting the two-day meet this year in Minneapolis. Action begins Friday at 7 p.m. ET.

Add Fantoni in with Finnerty, Lanza, and Pieroni and you’ve got some pretty darn dangerous medley relays for NCAAs. Backstroke was definitely their weak link of the four legs before, but this changes the game. Can’t wait for that 400 medley relay final!

Indeed, Glover was great for them last year. But he isn’t on the team this year, now is he?

51 in 100 not too shabby but agree that his 50 is the greatest ever and 49 is a stretch BUT this is just fun thinking he could go 49. I met him and he is really nice. Think he will win the 200 medley for Tennessee AND win the 100 he got second two years ago