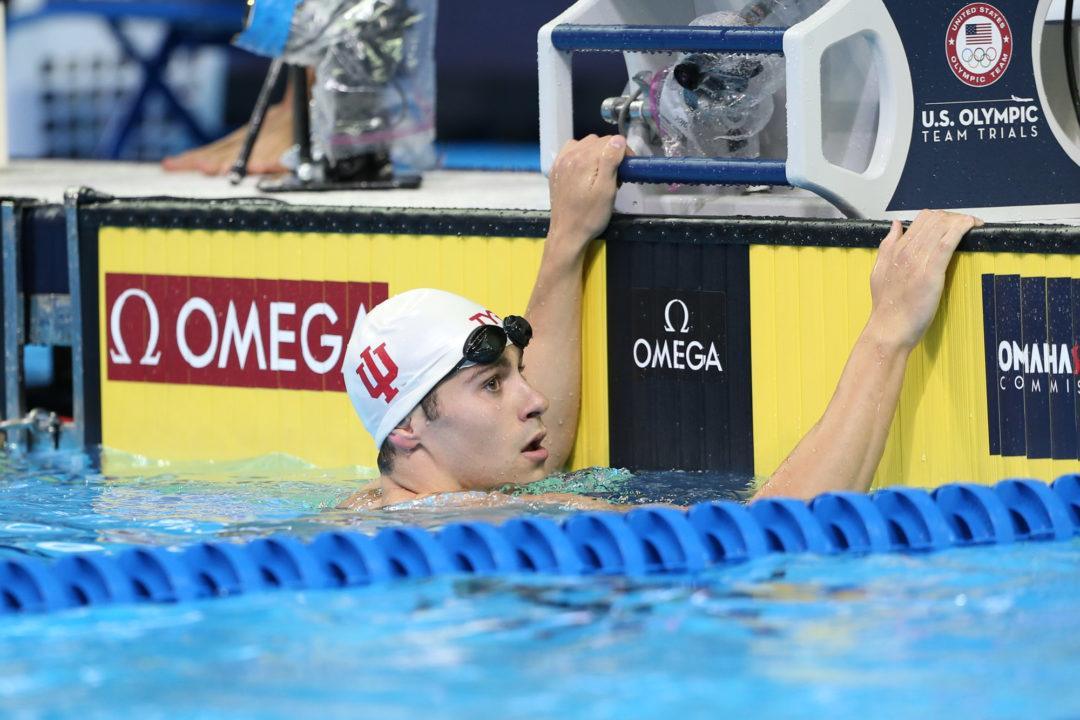 TEXAS VS FLORIDA VS INDIANA

Day 1 of the tri-meet between Texas, Indiana, and Florida is in the books, with the Indiana men and Longhorn women leading the way. The Hoosiers won a tight battle over the Longhorns on the men’s side, as their 149 points have them 17 up on Texas (132) heading into day 2.

Today’s events were contested in long course meters, with the short course yards version of them taking place tomorrow. The two meets are being treated as separate events with separate winners.

Pieroni turned the tables when the two swimmers returned for the 100 free later in the session. In that race, Pieroni blasted a 50.14 to take the win over Haas (50.79).

Indiana’s Marwan Elkamash and Texas’ Clark Smith, another Olympic gold medalist, traded blows in the distance freestyles. Elkamash led the way in the 800 free, winning with his 8:19.42 in the 800 free. Smith, on the other hand, was the 400 free champ in 3:55.99.

The defending NCAA Champions from the University of Texas were without several of their stars, including Joseph Schooling, Will Licon, Brett Ringgold, and Ryan Harty. Florida was without Olympic gold medalist Caeleb Dressel, who has still not competed for the Gators this season, with head coach Gregg Troy saying he’s giving Dressel time to recover from a long summer of Olympic competition.a

On the women’s side, Olympic gold medalist Lilly King took on Texas’ Olivia Anderson in the 100 breast. Both swimmers broke the 1:10 barrier, but it was Indiana’s King who got to the wall first in 1:09.05 to Anderson’s 1:09.67.

Texas’ Joanna Evans won a pair of events today, battling with Florida freshman Georgia Darwent in the distance freestyles. Evans, a Bahamian Olympian, posted an 8:50.16 to win the 800 free for the Longhorns. Darwent came in behind her in 8:52.39 to take 2nd for the Gators.

BLOOMINGTON, Ind. – The Indiana University men’s and women’s swimming and diving teams got the 2016-17 season off to a great start on Friday, posting three wins in a long-course meters tri-meet with Texas and Florida at the Counsilman-Billingsley Aquatic Center in Bloomington, Ind.

“I have to congratulate our men’s swimming and diving team,” IU head swimming coach Ray Looze remarked. “That’s the first win we have ever gotten over Texas or Florida in over 40 years. Our guys definitely came to race and I am super proud of them. Nobody was at full strength, but that happens this time of year and who show up with is who you have to compete with and I thought our guys were real competitive. I’m really proud of our men.

“I thought our women started off the meet great but faded. A lot of that has to do with taking care of your body during a meet and keeping that competitive edge and not easing up. I thought we got a little bit complacent. Overall, to have three wins against this level of competition is good and we can be a lot better.”

In the men’s 200 medley relay, the Hoosier team of Bob Glover, Ian Finnerty, Vini Lanza and Ali Khalafalla won with a time of 1:41.58 – the fifth-best time in school history. On the women’s side, the IU team of Brooklyn Snodgrass, Lilly King, Gia Dalesandro and Gabriela Rajic took second with a school-record mark of 1:55.72.

Freshman Cassie Jernberg had a nice debut for the Hoosiers in the 800 freestyle, leading the team by placing third with a time of 8:58.60. Stephanie Marchuk was fourth overall with a mark of 8:59.68.

For the Hoosier men, transfer and 2016 Olympian for Egypt Marwan Elkamash won the 800 freestyle with a time of 8:19.42, while teammate Adam Destrampe finished fifth overall with a mark of 8:28.78.

In the women’s 3m dive, IU’s Michal Bower placed second overall with a personal-best score of 335.15. With her NCAA qualifying mark, Bower now ranks as the 12th-best performer in the event in school history. Making her Hoosier debut, Taylor Pamplin placed sixth with a score of 271.30.

IU had another strong showing in the 100 freestyle, with Pieroni earning his second win of the day, touching first overall with a time of 50.14. Khalafalla was third in a time of 51.33, while Tavcar took fifth with a mark of 51.48.

In the 100 butterfly, Lanza placed second for the IU men with a time of 54.71, while Dalesandro highlighted the Hoosier women’s effort, taking third with a mark of 1:01.87.

In the final event of the night, the Hoosier men trotted out four Olympians – Pieroni, Khalafalla, Tavcar and Elkamash – with the quartet placing second overall with a time of 3:23.84. The relay’s time is the fourth-fastest in IU history.

The Indiana University men’s and women’s swimming and diving teams will be back in action on Saturday, October 22 when the team hosts Florida and Texas in a short-course yards tri-meet at the Counsilman-Billingsley Aquatic Center. The meet is scheduled to begin at 10:00 a.m. ET.

I don’t know exactly what the deal is, but this is not a swimmer going his hardest:

Just reading those splits makes me remember how it feels to swim the end of a 200 fly..

Texas…no Licon, no Schooling, no Harty! and still close meet. (anyone else missing?)

I think John Shebat is missing too

5
-3
Reply
Nothing
Reply to  Lauren Neidigh

2
0
Reply
Lauren Neidigh
Reply to  Nothing

Shebat wasn’t there. But he was there for the short course meet the next day.

1
0
Reply
Where R the Texas guys??
Reply to  weirdo

Texas a bunch of sore losers!

Care to elaborate on that

Scores restart tomorrow. So Texas lost today. We will see how tomorrow goes.

At home. Coming off an extended break after Rio.

She’s been smokin that snodgrass, nahmsayn

She has been injured for awhile. Just back in the pool in September after a break since April. Not able to practise 100% yet.