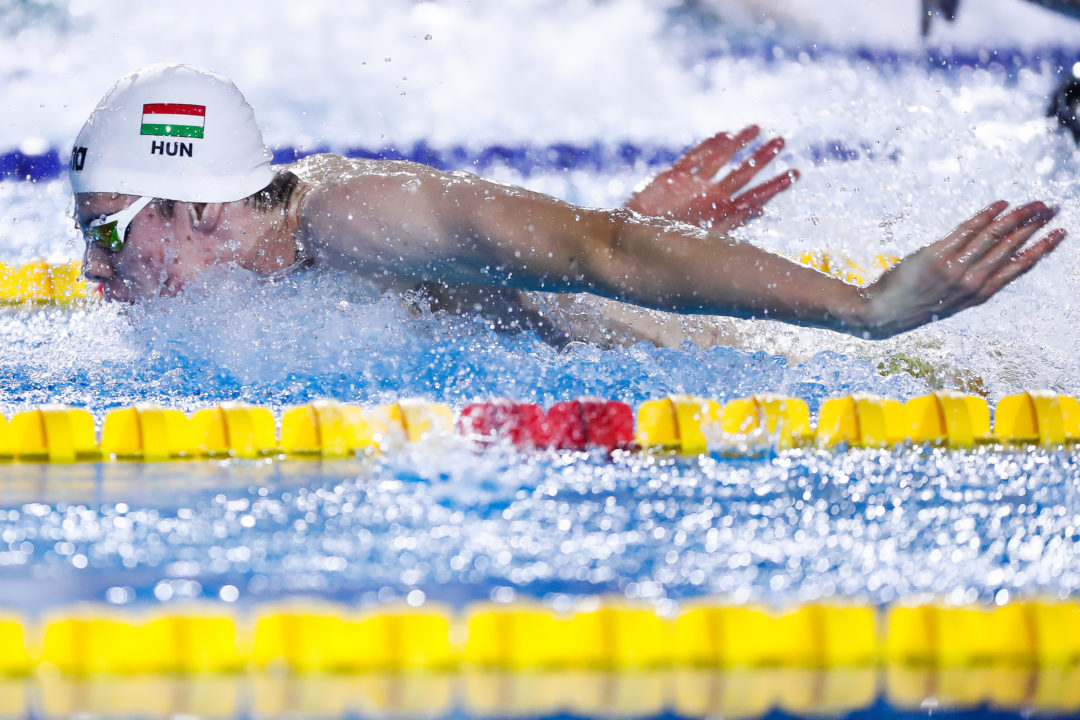 Hubert Kos picked up another World Cup medal in Toronto and discussed the legacy of IM swimming in Hungary, as well as his move to Arizona State. Current photo via Istvan Derencsenyi

Hubert Kos swam his way to a second-place finish in the 400 IM on the final night of the 2022 World Cup in Toronto. Kos joined South Africa’s Matt Sates (4:02.65) and Italy’s Alberto Razzetti (4:05.13) on the podium, which is the same top three we saw last week in Berlin.

Kos made his Olympic debut at the Tokyo Olympics where he raced the 200 IM and placed 20th overall with a 1:58.47. Kos has a breakout swim in the summer of 2022 when he won his first-ever European title, swimming a 1:57.72 for the gold medal. He also took home a bronze medal at the 2021 short course European Championships in the 400 IM.

After his race in Toronto, Kos discussed the legacy of IM swimming in Hungary and what it means to be carrying that mantel. In the past two decades, Hungary has produced some of history’s greatest IMers including Olympic champion Katinka Hosszu and 6-time Olympic medalist Laszlo Cseh.

Kos said that he grew up loving those swimmers and that Laszlo Cseh was his icon for most of his life.

Kos will return for the final stop of the 2022 World Cup series in Indianapolis but won’t be racing at the 2022 Short Course World Championships. Kos will instead be heading to Tempe, Arizona to kick off his NCAA career.

Kos will begin classes at Arizona State University in January 2023 and is expecting to start training with the team as early as possible after Indianapolis. ASU seems like a natural choice for the IM-focused Kos considering the school’s current crop of swimmers. Kos will be training alongside 2022 World Championships 200 and 400 IM champ Leon Marchand who announced himself at that meet with a 4:04.28 European record, getting within a second of Michael Phelps’ world record (4:03.84).

“He created one of the best, if not the best, swimmers of all time, especially in the medley”, said Kos of Bowman and Phelps. “That was one of the reasons. And I saw how good Leon was in the World Championships, so I kind of want to see what I can do against him in training.”

The Indianapolis World Cup stop will kick off on Friday, November 4, and will run until Sunday, the 6th.

As it has been nearly 30 years since he retired, many of your readers might be well aware the Cseh podium machine of the recent decade plus, but not be as aware of the Championship IM machine that Darnyi was. For NINE years (1985 – 1993) he was unbeaten in major competitiions in BOTH LCM Individual Medley events. That covers 4 Olympic Golds, 4 LCM World Golds, 6 European LCM IM Golds. Three times he surpassed the 200 IM LCM WR, and three times he was under the 400 IM WR; he was twice the Swimming World (pre SwimSwam days) Male World Swimmer of the year and Hungarian Sportsman of the year 5 times (all sports). And all this after… Read more »

Great point. Tamás is an absolute legend, and a gentleman, and he has been generous in his support and advice to Hubi over many years. The Hungarian swimming family is strong and many champions continue to make a meaningful contribution to the development of the next generations.

Perhaps more to the point for training for college SCY preparation than being with the great LCM IMer’s Kalisz and Litherland, is Grant House (SCY 1:40.53; LCM 1:59.03), along, of course, with Leon.

Good luck with the transition, Hubert.

Hubert, You will receive a big welcome at ASU! ASU also works well with international athletes!

Some big shoes to fill – and you haven’t even mentioned the biggest of them all, Tamas Darnyi 🙂