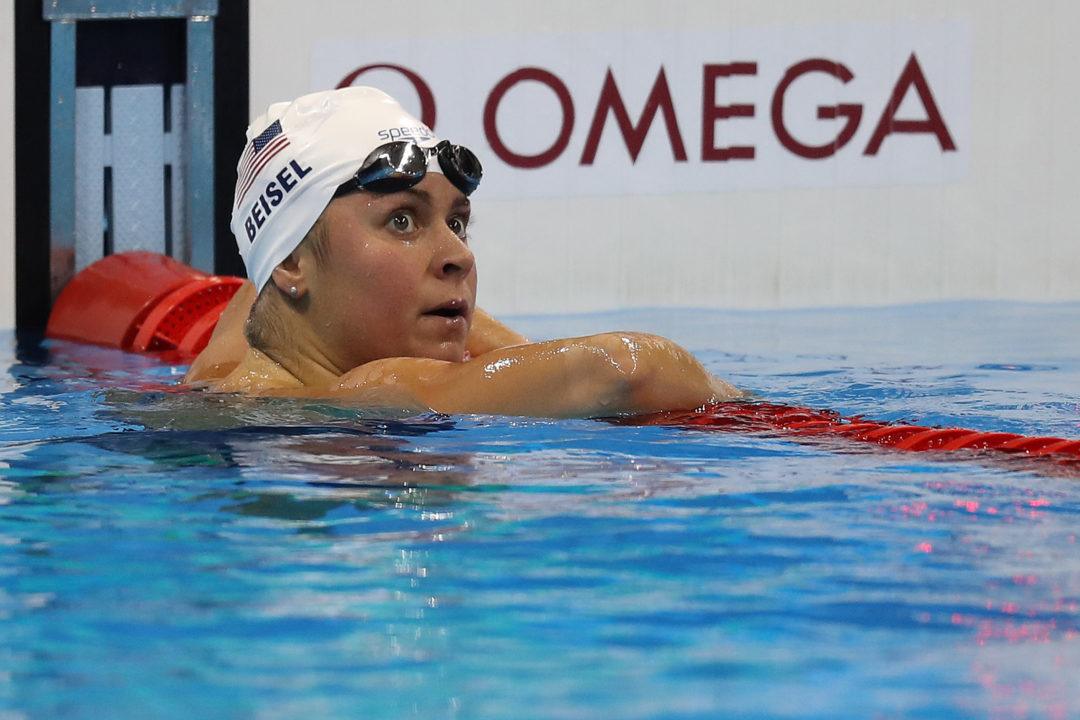 Olympic medalist Elizabeth Beisel, 30, announced her engagement to Jack Nichting, 27, whom she was on the American reality TV show Survivor with in 2019. Archive photo via Simone Castrovillari

On Wednesday, three-time Olympic medalist Elizabeth Beisel, 30, announced her engagement to Jack Nichting, 27, whom she was on the American reality TV show Survivor with in 2019. Beisel and Nichting have been together since December of 2019.

Beisel and Nichting were both contestants on Survivor: Island of the Idols, which was the 39th season of Survivor. Survivor consists of a competition where a group of strangers are placed on an island and have to provide food, water and shelter for themselves, in addition to participating in challenges that test their physical and mental abilities. Contestants get eliminated throughout the season via the voting of other contestants, and the last contestant remaining wins a grand prize of $1,000,000 dollars.

In Island of the Idols, Nichting was the 7th contestant eliminated out of 20, whereas Beisel was eliminated 12th.

Despite her appearances on Survivor, Beisel’s swimming career is arguably more successful. In 2008, she qualified for the Beijing Olympics in the 400 IM as a fifteen-year old, and went on to finish fourth in the event. Four years later, she won two medals at the 2012 Olympics in London, taking silver in the 400 IM and bronze in the 200 back.

Beisel is also a three-time World Championship medalist, having won 400 IM gold in 2011 and bronze in 2013, as well as 200 back bronze in 2009. In 2016, Beisel qualified for her third Olympic games and was named one of the team captains. At the 2016 Olympics, she finished sixth in the 400 IM final. Her final competition was the 2017 World Championships, where she once again made an international 400 IM final and finished seventh.

Collegiately, Beisel competed for the University of Florida from 2010 to 2014, where she won two individual NCAA titles. In 2021, she became the first woman to swim 10.4 miles unassisted rom mainland Rhode Island to Block Island as part of the “Block Cancer” campaign.

Nichting currently works as development coordinator for Grassroot Soccer, a nonprofit organization that promotes adolescent health. He attended the University of Virginia from 2013 to 2017, and earned his masters’ degree in public administration in 2019 at James Madison University.

Swimmer and Survivor fan here.
Congrats but that’s pretty much it. Props to her swimming achievements in medley and backstroke events. However, questionable Survivor season and even more questionable conduct in an episode with a disgusting MeToo discussion that she used to her advantage. Dan, Missy and Elizabeth made this season pretty much unwatchable.

That cannot have been the best photo you have of Beisel

That season was the worst in Survivor history. Glad at least one good thing came of it.
Congratulations, I guess. Not that they look like there’s something to celebrate (aside from picture 4).

Unfortunately that season of Survivor is terrible. But good for them!

Interestingly, they were never actually on a tribe together. They only met properly after they both got eliminated.

Congratulations to Elizabeth and Jack! Seem like a wonderful couple.

FYI – Rio was Beisel’s 3rd Olympics, not 2nd. And much less important, but there were only 20 contestants on their season of survivor, not 26.