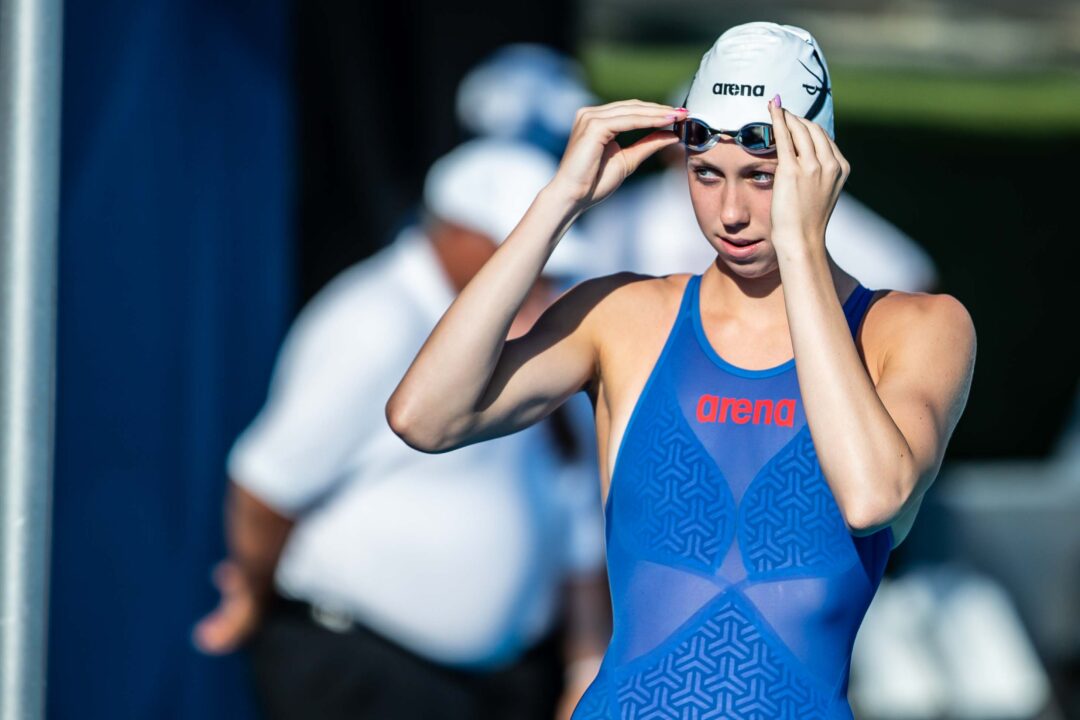 Walsh beats out Maggie MacNeil's mark of 50.84 from two weeks ago to become the second woman under 51 seconds in a practice suit. Archive photo via Jack Spitser/Spitser Photography

Remember when we said that the women’s 100 fly at NCAAs would be a four-woman race between Claire Curzan, Torri Huske, Kate Douglass, and Maggie MacNeil? Well, we were wrong. Because Gretchen Walsh just dropped a 50.53 100 fly in a practice suit today, overtaking MacNeil’s mark of 50.84 to become the fastest woman ever unsuited in the event. In addition, she is also the second woman to crack the 51-second barrier unsuited, as MacNeil was the first two weeks ago.

Walsh’s time is a personal best by over a second, beating out her old mark of 51.73 from December 2020. It also would have been fast enough to place fourth at last year’s NCAA Championship meet.

If you look at the splits, most of Walsh’s advantage over MacNeil came on the front half of the race, where Walsh was 0.38 seconds faster. However, MacNeil’s back half was 0.07 seconds faster than Walsh’s. You can watch Walsh’s race video here:

Last year, Walsh didn’t even swim the 100 fly at NCAAs, instead opting to race the 50 free, 100 back, and 100 free. Her early season speed in the 100 fly begs us to ask: will she be switching from the 100 back to the 100 fly at NCAAs this year? From what it looks like now, racing the 100 back would give her a better chance at a national title and would be better for UVA-points wise, considering that she’s the second fastest performer of all time in that event whereas in the 100 fly she will have to race her teammate and American record holder Kate Douglass. However, so many things could change from right to championship season.

And she breathed every stroke, from the look of it

Unsuited? What does that mean?

In a practice suit, rather than a tech suit.

Matter of time before someone pops a US Open record unsuited…

Insane swims. How much does Walsh generally drop w a suit on?

I don’t think that’s the best example to use given how much she dropped during the SCY season last year from in-season (unsuited) to post-season (suited), as well as dropping time from prelims to finals fairly significantly in all her other races at Nationals last summer. Everyone has off-swims from time to time, and backstroke outside definitely increases the risk of having an off-swim – especially when you train indoors year-round. I think she has a far better swim in her in that 100m Back LCM.

You’re correct that my example was just one example, but overall she doesn’t drop very much when she suits up not does she drop very much from in season to NCAAs.

There are other athletes that benefit more from just putting on a tech suit, but Gretchen gets a reasonable benefit from them. This is absolutely a sign that she is capable of a 48 high or 49 low 100 FL

that’s all I have to say

It, literally, probably is.
Swimmers on the US National swim team have unannounced drug tests all the time. They are probably the least likely of all the swimmers to be able to get away with doping.

They may also be consuming creatine which is legal and helps tremendously!