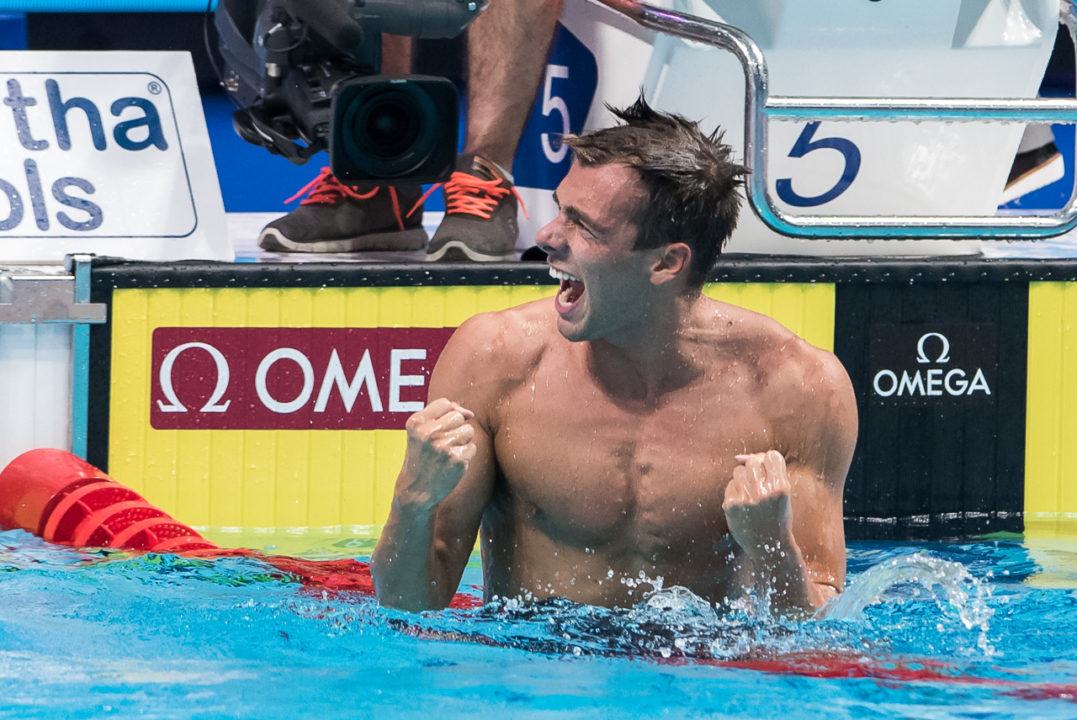 “Tokyo is a long way to go but I am thinking about pool and open water, both," said Gregorio Paltrinieri after winning the men's 1500m freestyle in Budapest. Archive photo via Mike Lewis/Ola Vista Photography

After winning his second consecutive World Championship title in the men’s 1500 meters freestyle, Italy’s Gregorio Paltrinieri evoked the possibility of adding open water races to his Olympic slate, during his post-race interview. Paltrinieri, whose bronze medal in the 800 free in Budapest brings his Worlds medals haul to four (including his 1500 gold and 800 silver from Kazan in 2015), said, “Italy has great athletes in open water. We have a great tradition and we keep it.”

He added, “Tokyo is a long way to go but I am thinking about pool and open water, both. I will see and do anything that I can. It is cool because now I have a challenger, [Ukraine’s] Mykhailo [Romanchuk]. I saw Mellouli a few years earlier, swimming both. It is fun. I like open water.”

At the 2012 Olympic Games in London, Ous Mellouli became the first swimmer to earn gold medals in both open water and pool swimming when he won the open water 10km race. Previously, he had been the 2008 Olympic champion in the 1500 free in Beijing. Mellouli also took 1500 bronze in London – at the same Games where he won open water gold.

Paltrinieri is up for the challenge. In addition to expressing his interest in enlarging his repertoire to include longer, open water races, he noted his satisfaction that the International Olympic Committee had decided to add the men’s 800m free to the pool lineup for Tokyo 2020. “I was really happy to discover that the 800m made it to the Olympics. It is one more chance for me to take a medal.”

Paltrinieri’s Italian teammate Gabriele Detti, who finished just off the podium in fourth in the 1500 in Budapest, might accompany him into this adventure. “Me and Gabriele Detti are training together since 2012 and we do a lot of stuff together,” said Paltrinieri.

Isn’t he the one with he strange freestyle and the arms treat angles outveey straight and wide? Not sure how he goes so fast with a stroke like that.

He already swim in OW. He will swim the 10km in the WUGs.