Going To Gwangju: Take A Photo Tour Of The 2019 World C’ships Venues 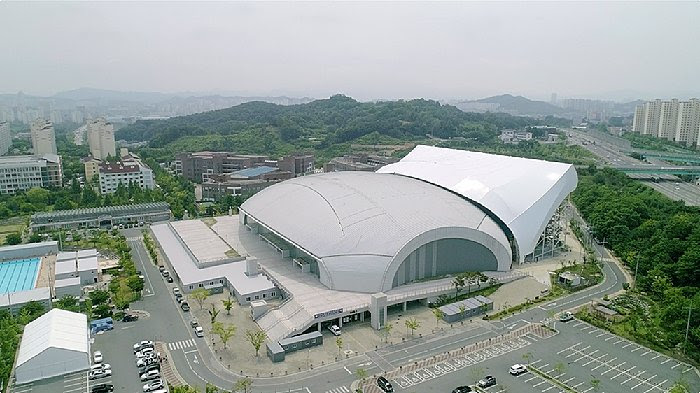 Get an inside view of the various venues ready to host the world's best aquatic athletes at the 2019 FINA World Aquatics Championships. Current photo via Gwangju LOC

The 2019 FINA World Aquatics Championships are almost upon us, which means we have just a few weeks to familiarize ourselves with the various venues involved in the biggest competitive event outside of the Olympic Games.

Check out the sites of where athletes such as Caeleb Dressel, Katie Ledecky, Sun Yang, Kyle Chalmers, and Sarah Sjostrom will be vying for medals and possibly records when the World Championships officially kick off in Gwangju, Korea on Friday, July 12th.

This facility will host the indoor swimming, as well as the diving competition. 11,000 seats are housed within the venue, including an estimated 8,000 temporary seats. This was the site of the 2015 Summer Universiade.

Artistic swimming will be hosted in a temporary pool in Yeomju Gymnasium, with a capacity to welcome over 5000 spectators. The discipline falls in the top 3 of the ticket sales ranking.

Open Water Swimming will take place in the Yeosu Expo Ocean Park; the site for Expo 2012 Yeosu, whose theme was “The Living Ocean and Coast” and attracted more than 8 million visitors from over 100 countries.

High diving will be held at The Chosun University Football Field. This venue has been selected for the breath-taking scenery of Mudeungsan Mountain National Park behind the High Diving towers.

According to the latest sales analysis, high diving holds the highest sales ticket number among the five disciplines of the FINA World Championships – 96% of the tickets have already been sold/

The competition site will have the capacity to welcome more than 3’000 spectators.

Gwangju 2019 organizers say, “It is our mission to provide the athletes with the highest standards and best service so that they feel at home and well rested before each of their competitions!

Our Athletes’ Village has been ingeniously planned. Our team of experts has worked tirelessly in developing the most comfortable, peaceful and pleasant environment to live in while competing! It will open its doors on July 5th.”

Can’t wait. Literally counting down the days until the swimming starts.

same here …..we will have Wugs before at least for appetizers😜

I’m going going, back back, to Gwangju Gwangju

They don’t hold back. “Ingeniously planned”

Gwangju is an interesting view via Google Maps. They seem to love green and blue roofed buildings, often in close proximity.

Gonna be hot, muggy, and rainy…… Ahhhh ‘Rea in the summer! Can’t wait….. Get your kimchi on!

It’s ok, Sun Yang will not be staying in it

Cheap shot. Plenty of swimmers from other countries with equally big egos.