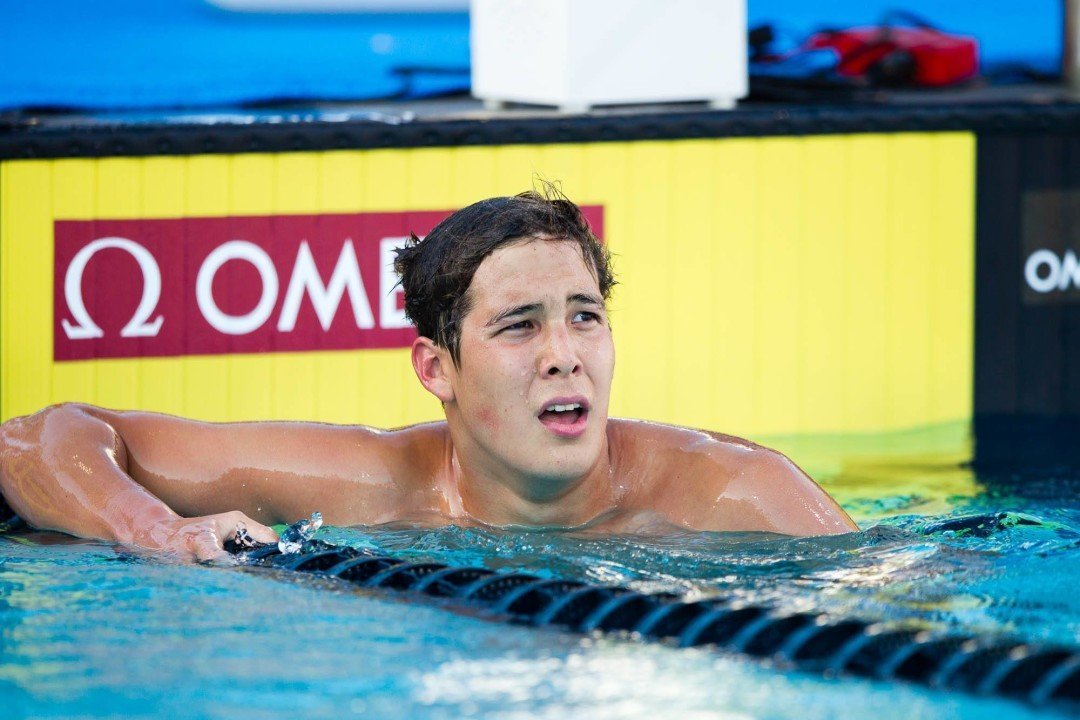 Jay Litherland led three swimmers under 3:40 during the second day of finals at the Georgia Fall Invitational. Current photo via Tim Binning/TheSwimPictures.com

Live Results
Tonight marked the second night of the Georgia Fall Invitational. The session featured the 200 medley relay, 400 IM, 100 Fly, 200 Free, 100 Breast, 100 Back, women’s one-meter diving, men’s three-meter diving, and the 800 free relay. The meet is also intended to be a dual meet between Georgia and Auburn.The Georgia men currently lead Cal and Auburn, scoring 663.5 points to Cal’s 599 and Auburn’s 583.5. The Lady Bulldogs closed the gap on Virginia the second night but still sit behind the Cavaliers, 684.5 to 625. Auburn currently holds third place with 524 points.Meanwhile, Georgia leads both dual meets, winning over Auburn 103-85 on the men’s side and 125-61 on the women’s side.
200 Medley Relay
Virginia easily took the medley relay with a nation-leading time of 1:35.69. The team of Courtney Bartholomew (24.18), Laura Simon (27.05), Ellen Thomas (22.80), and Caitlin Cooper (21.66) took down the Cavalier’s B team and Georgia’s A team for the victory.
The men’s relay came down to a nail-biting race between Cal and Auburn. Auburn’s Peter Holoda managed a sub-19 freestyle split to pass Cal’s Long Gutierrez right at the finish. The Tigers touched at 1:24.56 to Cal’s 1:24.62. Other notable splits were Ryan Murphy‘s 21.17 lead-off and Michael Duderstadt‘s breaststroke split of 23.33.

Emily Cameron of Georgia captured gold in the women’s event, finishing over three seconds ahead of teammates Annie Zhu and Megan Kingsley. Cameron’s 4:05.91 marks a best time by over a second and boosts her to third in the country. Zhu and Kingsley touched in 4:09.17 and 4:09.46.

On the men’s side, the three leaders swam fast enough to become the first three people this year to break three minutes and forty seconds. The three NCAA A cut times were highlighted by a three-second personal best from Georgia’s Jay Litherland, who picked up the win in 3:38.68. His teammate Gunnar Bentz followed in 3:39.61 to out touch Cal’s Josh Prenot (3:39.94).

The three top finishers in the women’s 100 fly were all within .06 seconds of each other. Georgia’s Kylie Stewart (52.60) and Hali Flickinger (52.62) led the charge with Virginia’s Jen Marrkand (52.66) hot on their heels. Marrkand was followed by her teammates Ellen Thomas and Shannon Rauth while Georgia’s Megan Kingsley and Auburn’s Alyssa Tetzloff and Maddie Martin closed out the A final.

Justin Lynch won the men’s 100 fly, lowering the best time he achieved this morning down to 45.66. Lynch remains at fourth in the country but was able to hold of a charging Long Gutierrez to claim the victory. The Golden Bear touched second in 45.80 shortly ahead of Georgia’s Pace Clark (46.10).

Auburn’s three A-finalists all finished outside of the top three. Arthur Mendes took fourth place, while Peter Holoda and Liam McCloskey finished seventh and eighth. Georgia swimmers Taylor Dale and Ty Stewart touched in between at fifth and sixth.

Virginia’s Leah Smith took the 200 in a time only a hundredth shy of Natalie Hinds’s nation leader, winning in a time of 1:43.96. Smith has now broken 1:44 three times in her career. Georgia distance stud Brittany MacLean raced to second in 1:44.37, followed by Virginia’s Megan Moroney in 1:44.91.

The same two women who cracked a minute this morning repeated the performance tonight (albeit both slightly slower), finishing in the same order. Laura Simon nabbed the win for Virginia in 59.35 over Auburn’s Annie Lazor, who touched in 59.94 to hold off Simon’s teammate Vivian Tafuto (1:00.24).

Auburn’s Michael Duderstadt led a trio of 52 second swims to victory, winning in 52.14 ahead of Florida State’s Jason Coombs (52.37) and Virginia’s Yannick Kaeser (52.72). Duderstadt and Coombs both achieved personal bests that launched them to fourth and fifth in the country.

Cal’s Hunter Cobleigh and Matt Whittle finished in the middle of the pack in fourth and fifth. The rest of the pack included Auburn’s Jacob Molacek, Georgia’s James Guest, and Cal’s Connor Hoppe.

Virginia’s Courtney Bartholomew once again broke the 51 second barrier, touching in 50.85 to secure the top three 100 backstroke times in the country this year. Pushing Bartholomew was Georgia’s Olivia Smoliga who touched second in 51.50. Smoliga’s teammate Kylie Stewart claimed the bronze in 52.91.

Auburn grabbed the fourth through sixth spots with Jillian Vitarius, Caroline Baddock, and Sarah Reynolds. Florida State’s Bianca Spinazzola and Georgia’s Kimberlee John-Williams raced in to seventh and eighth to round out the heat.

In the men’s event, Ryan Murphy improved on his nation-leading sub-45 second time from last night, touching over Georgia’s Taylor Dale. Murphy’s 44.75 was enough to win comfortably over Dale’s 45.42 and teammate Jacob Pebley‘s 45.93.

The remainder of the heat all touched in 47 seconds. Pace Clark led the pack, followed by Florida State’s Noah Hensley and Auburn’s Joe Patching. The Bulldogs’ Ty Stewart and Cal’s Jeremie DeZwirek capped off the A final.

Virginia’s Rebecca Corbett won the women’s three-meter with 337.35 points over Georgia’s Olivia Ball and Harvard’s Jing Leung. On the men’s side, Justin Youtsey took the victory in the men’s one meter, beating Virginia’s Carl Buergler 352.35 to 344.20.

The Lady Bulldogs took the 800 free relay with the team of Hali Flickinger, Meaghan Raab, Kylie Stewart, and Brittany MacLean. The team posted a nationwide best time of 7:00.75, boasting a nation-leading best time lead-off of 1:43.56 from Flickinger as well as a 1:44.50 anchor from MacLean. Virginia touched in second while Penn State rounded off the podium.

The Cal men’s team of Long Gutierrez, Ryan Murphy, Andrew Seliskar, and Trent Williams posted up a nation-leading 6:16.41 to claim the men’s event. Gutierrez’s lead-off split of 1:33.10 would have been the new nation leader by over a second if not for Georgia’s Matias Koski who led off .03 faster in 1:33.07.  Georgia and Cal’s B team were close behind to finish in second and third.

Gutierrez isn’t the nation leader since Koski went 1:33.0 in the very same heat.

What happened to Kaitlyn Jones of Virginia who qualified first in the 400 IM and the 100 Fly in the Prelims but didn’t swim Finals?

broke her hand or arm in warmup…

I see Georgia pulling a near Texas in the 400 IM