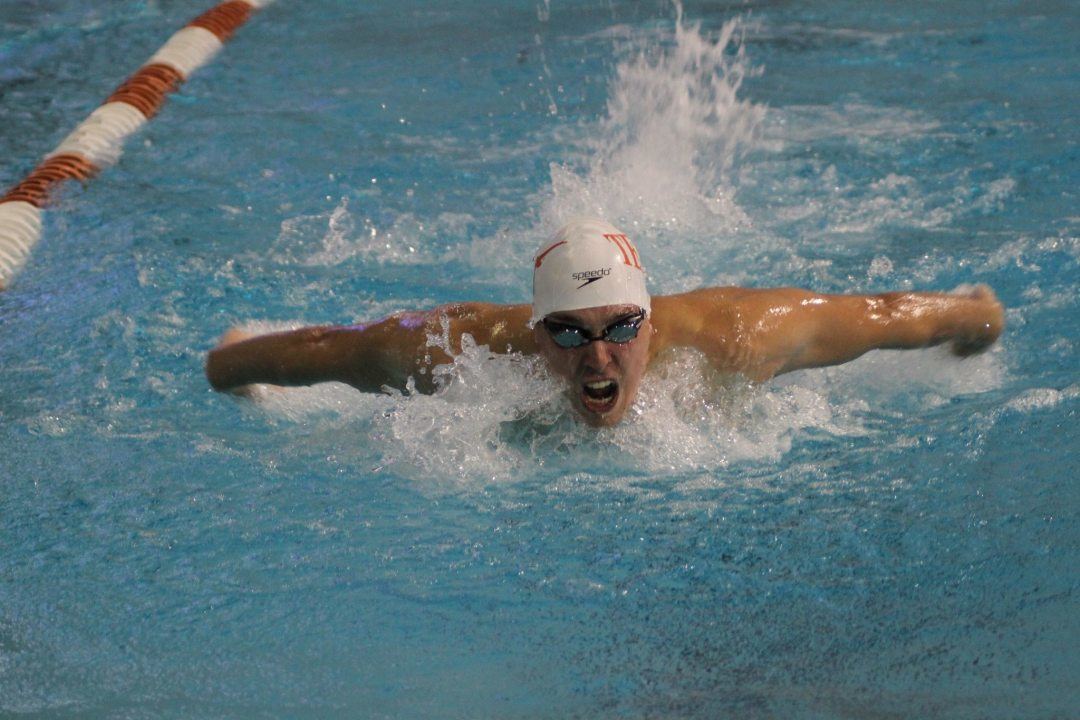 Clark Smith set a new American and NCAA record in the 1000 free as part of the 1650 tonight. Archive photo via Andy Ringgold/Aringo Photography

After Arizona’s Emma McCarthy posted the top time in the 1650 morning heats in 16:26.45, Elizabeth Stinson of USC won the event tonight in 16:07.34, just ahead of Joanna Evans of Texas who was 2nd in 16:07.78. Danielle Valley and Jenny Holtzen of Wisconsin finished 3rd and 4th, and Allie Wooden of USC was 5th. McCarthy ended up 6th.

In the men’s 1650, Clark Smith blew the field away the first 1000 as he was going for the split, and did he ever go fast. He crushed both the American and NCAA records by quite a bit, coming in at a mind blowing 8:33.93. The American record of 8:36.49 by Erik Vendt and NCAA record of 8:43.48 by Michael McBroom didn’t stand a chance against Smith tonight. We had heard he was going for this split prior to the session via Texas Men’s Swimming social media. Check out the article about it here. Matthew Hutchins of Wisconsin ended up winning the race in 14:38.14, three seconds clear of Townley Haas who was 2nd in 14:41.09. Chris Wieser of Arizona was a distant 3rd in 14:55.25. Smith shut it down after the 1000 mark and finished 15th in 15:41.16.

Defending NCAA champion Will Licon dominated the men’s 200 breast winning handedly in 1:52.82. That swim puts him 1st in the NCAA ahead of Alabama’s Anton McKee who was previously 1st in 1:53.00. Gage Crosby of Arizona was 2nd in 1:55.31, and Morten Klarskov of USC was 3rd in 1:56.28. 2nd seed from this morning Andrew Wilson scratched the final after going 1:53.90 earlier today.

The Texas men came out on top in the men’s race, winning 2:50.72. Brett Ringgold, Townley Haas, John Murray and Joseph Schooling all swam 42-something on their way to victory, including a 42.30 lead-off from Ringgold. That time puts Texas 2nd in the NCAA behind only Florida (2:50.45).

Amazing swim from Smith! Coach Reese said he does amazing things in workouts, swimswam you should ask Coach that question.

the question they should ask is “why didn’t you show up for awards this summer when you got beat?” poor sportsmanship…classless those are more important qualities than how fast you are in my opinion.

Weirdo, you talk about that, at 10 minutes in the video? 😆
https://www.youtube.com/watch?v=olJAkBM_iTM