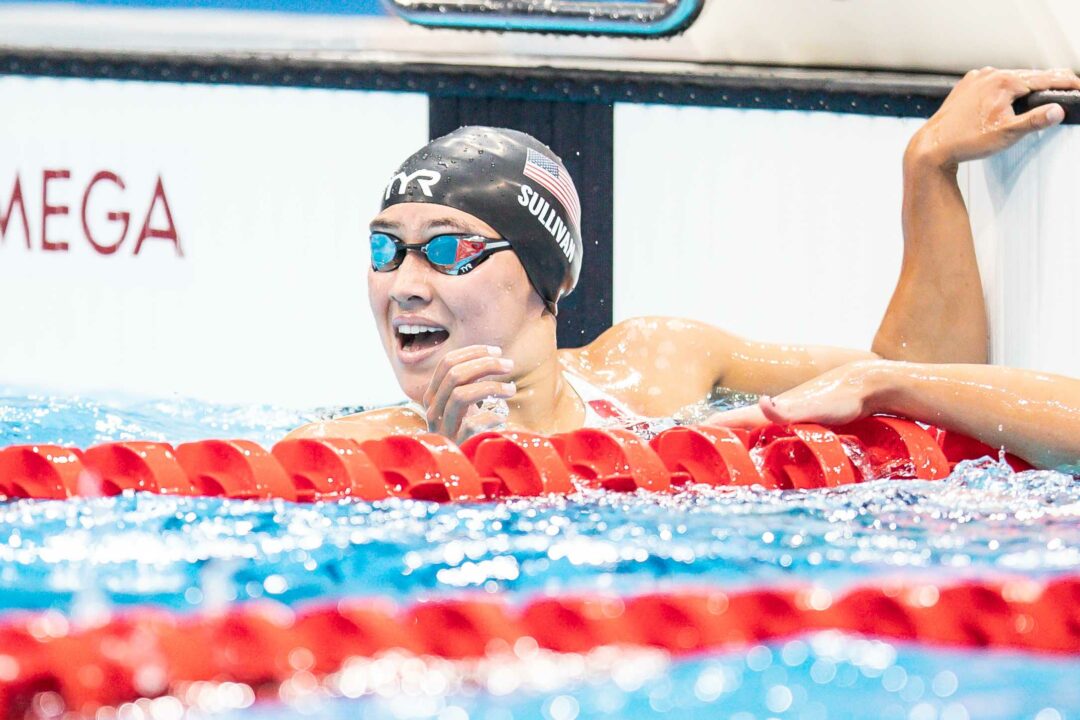 The 16-year-old was just tenths off her best time in the 400 IM 20 minutes after dropping two seconds in the 200 back at the Mission Viejo PSS.

Follow here for a live recap of the third night of finals swims at the 2022 TYR Pro Swim Series in Mission Viejo, California.

The final Pro Swim series before the World Championships is being held in Mission Viejo this week, featuring a moderate-sized field which is line with the other stops this year. Many of the U.S. World Champs and Junior Pan Pacs team members are slated to compete this week. You can read our psych sheet analysis for a deeper dive on who is at the meet.

In this post we’ll be focusing on some of the key storylines to follow at the Mission Viejo Pro Swim Series stop.

The Return of Erica Sullivan

Tokyo 2020 Olympic Silver medalist Erica Sullivan is making her return to competition after sitting out the U.S. International Team Trials in late April due to a shoulder injury. Of course, Sullivan will not be competing at the World Championships this summer, and we can assume she’ll probably treat U.S. Nationals in late July as her peak meet for this summer.

Sullivan won Silver in the inaugural women’s 1500 at the Olympics last summer, swimming a 15:41.41 to become the 5th fastest performer all-time in the event. Sullivan is entered in the 200 free, 400 free, 800 free, and 1500 free this week, and is the top seed in all but the 200. She’ll be going up against her former club teammates at the Sandpipers of Nevada in all 3 events too, which should be fun to watch.

Now swimming for the University of Texas, Sullivan had a s0-so freshman season with the Longhorns. She finished 2nd in the 1650 and 3rd in the 500 at NCAAs, although her times were off her best in both events. Sullivan hasn’t provided a ton of information on the details or timeline of her shoulder injury, so it’s possible the injury played a role in her times at the end of this NCAA season. It’s also possible that’s she’s just been experiencing a post-Olympic letdown, or simply took a long break after the Olympics last summer.

Either way, what we do know is that she pulled out of the U.S. Trials in April, citing a shoulder injury. In early April, Sullivan competed at the U.S. Open Water Nationals in the women’s 10K, where she led for the first 3 laps, but ultimately did not finish the race, presumably because of the shoulder injury. This week will give some insight as to where the 21-year-old is at with her LCM racing ahead of U.S. Nationals.

Even among college programs and pro groups, the Sandpipers of Nevada are everywhere to be seen on the psych sheet for this meet. While that’s not surprising, given the club team put 3 members on the U.S. Olympic Team last summer, and 3 members on this year’s World Championships team, it’s still notable that a club team is this competitive at this level.

Sims is on the Worlds roster for the 4×200 free relay as well, exactly the same event she made the Olympic Team in last summer. Grimes qualified for the 1500 free and 400 IM, winning the latter at Trials last month. This meet will likely serve as the final “tune-up” for the Sandpipers girls before they head to camp ahead of the World Championships.

Leon Marchand is one of the most recent swimmers to burst into “superstar” status, breaking NCAA Records during his first season at Arizona State. Marchand heads into the World Champs as a medal favorite in the 200 IM and 400 IM. He’s also slated to swim the 200 fly in Budapest.

This meet will be an interesting one to keep an eye on Marchand in. Like the other World Champs qualifiers, this will probably serve as the final tune-up before Worlds. Therefore, it will be of interest to see whether Marchand inis going to put up fast times heading into World Champs, or if he will be waiting to put up his fastest times of the year in Budapest.

A Tough Field in the Men’s Sprints

The men’s sprint events look like they’ll feature some of the most exciting races of the meet. NC State Wolfpack swimmers and former swimmers Ryan Held, David Curtiss, and Justin Ress are set to go head-to-head in the men’s 50 free. All 3 men have been under 22 seconds before in the event, marking a potentially eye-popping race. Held is currently ranked 15th in the world this year with his season best of 21.85.

Although it’s not exactly a sprint, the men’s 200 free might be the best event of the meet. Trenton Julian, Grant House, Held, and Julian Hill have all been 1:47.5 or faster and are set to battle it out. Additionally, Leon Marchand is seed way back, and almost certainly has the ability to be sub-1:50 in the event. Marwan Elkamash is entered 5th at 1:48.23, while ASU’s Patrick Sammon, Irvine Novaquatics’ Christopher Mykannen, and ASU’s Jack Dolan have also been 1:49 before.

Jeff Julian‘s newly-formed pro group out of Mission Viejo Nadadores is entered in this meet, featuring many of the top swimmers in the field. Perhaps most notably, Justin Ress and Trenton Julian, U.S. World Champs Team members, are both top seeds at this meet.

Ress, who is qualified for the 50 back in Budapest, is entered in the men’s 50 free, 100 free, and 100 back. He’s the top seed in the 100 back, 2nd in the 100 free, and 3rd in the 5o free. Ress moved to MVN under Julian earlier this year, announcing that he needed a change of pace and new surroundings. The move seems to have paid off, as he qualified for World Championships in the 50 back, and made the 4×100 free relay.

As with everyone else who will be swimming in Budapest, this meet will likely serve as Julian’s group’s final racing ahead of Worlds.

Washington State alum Taylor McCoy will be making her racing debut since joining the MVN pro group. McCoy was an NCAA qualifier and Pac-12 A finalist with Washington State, and finished 4th in the 200 back at the Wave I Olympic Trials last summer. She’s entered in the 100 back, 200 back, 200 IM, and 400 IM this week, and is seeded in the top 8 in all 4 events.

Jeff Julian’s pro group of 2 in full force. One is his son. How does Mission pay him for that?

How’s Trent allowed to swim or be near any children ??

good question, but we don’t know what he is accused of doing….