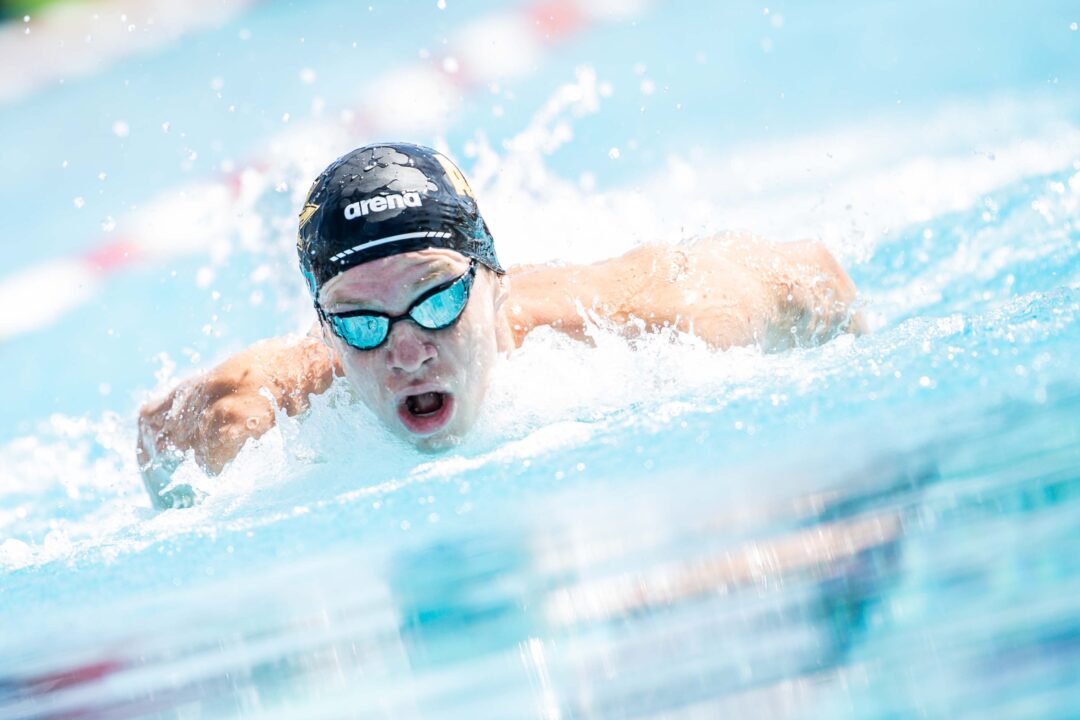 French swimming star Leon Marchand left the recent Pro Swim Series in Mission Viejo after only contesting the 200 butterfly to join his team for a pre-World Championship training camp in Canet.

Marchand, who just wrapped a standout freshman season at Arizona State, dominated the 200 butterfly on Thursday, winning in a time of 1:56.54 before scratching from the 100 butterfly and 400 IM on Friday.

According to Marchand, his decision to leave the meet a day early was due to the fact that he had to travel back to Europe to join the French team’s training camp ahead of the 2022 World Championships. Marchand is one of 21 swimmers expected to represent France in Budapest later this month, where he will contest the 200 butterfly, 200 IM, and 400 IM.

“I’m happy with his time,” his coach Bob Bowman said. “He’s still learning how to swim this event properly.”

His best time of 1:55.40 was done last June, before he began training with Bowman, who also coached the former World Record holder in the 200 fly Michael Phelps.

The French World Championship team is currently training in Canet-en-Roussillon in France until they depart for Budapest. Pool swimming at the World Aquatics Championships begins on June 18.

The camp is being held at the Canet 66 Natation, which was the final site of the Mare Nostrum Swim Tour in May. The facility boasts a 8-lane, 50 meter competition pool, 8-lane, 25-meter recreational pool, and a gym complete with 8 multi-purpose work stations.

The facility also includes a recovery area specifically designed for swimmers with a jacuzzi and a stretching room, which will be utilized in the swimmer’s tapper process as they prepare for Worlds.

The French team is being overseen by FFN High Performance Director Jacco Verhaeren, who was appointed by the FFN to lead the program last year in the lead-up to the Paris 2024 Olympic Games. Verhaeren coached several members of the Australian National Team from 2013 until 2020.