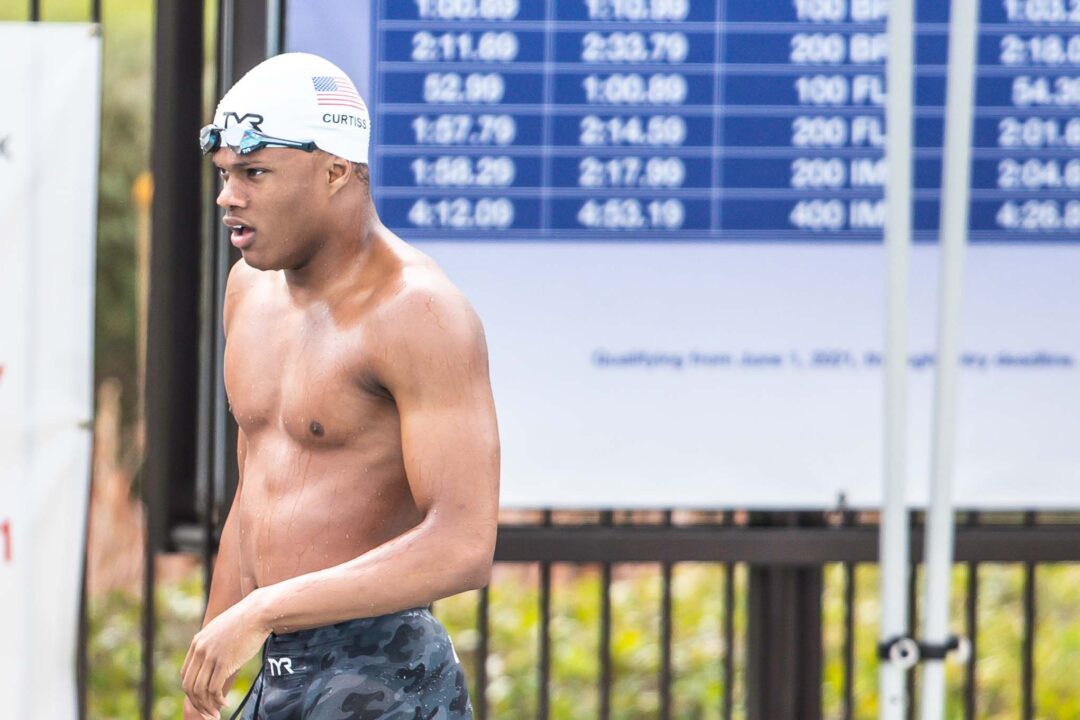 After setting a lifetime best in the 50 free, SwimSwam caught up with Curtiss about his performances, as well as his swimming plans for this summer. Archive photo via Jack Spitser/Spitser Photography

The 16-year-old was just tenths off her best time in the 400 IM 20 minutes after dropping two seconds in the 200 back at the Mission Viejo PSS.

Yesterday, at the 2022 TYR Pro Swim Series in Mission Viejo, California, NC State swimmer David Curtiss went a personal best time of 21.76 in the prelims of the men’s 50 free. Previously, his lifetime best was a 21.87 from January 2021. His swim yesterday now ties him as the 11th-fastest U.S. performer of all time in the event alongside Gary Hall.

Curtiss’s swim was an improvement from the 22.00 he swam at U.S. International Team trials this April, which resulted in him finishing fifth in the finals.

Later in the finals, Curtiss neared his prelims time by going 21.80 to win the race. Previously in the meet, Curtiss scratched the final of the 100 free because he had met his goal time in prelims. SwimSwam later caught up with Curtiss about his performances at this Pro Swim Series and what his future plans are for the summer.

“I actually didn’t expect to go as fast as I did [in the 50 free],” Curtiss said. “I went into this meet with no expectations, and no worries about going fast. My goal was to fine tune some technique, play around with some swims, and meet some loose goals for myself.”

“My feelings about both of my races were positive,” Curtiss said. “I felt I did well considering the lighter training I’ve had these past few weeks; only have two or three weeks under my belt and still being able to go fast is reassuring for when I increase training and go heavier.”

After swimming his first collegiate season at NC State, Curtiss is now training with his club team, the Hamilton Area YMCA, in New Jersey temporarily for the summer after he couldn’t find living accommodations at NC State. He’s currently doing a lighter training schedule, which includes singles daily and reduced lifting. However, he will increase his swimming and lifting load starting Wednesday of this week.

“The move to return home was all to decompress from an interesting first year and a rough NCAAs,” Curtiss said. At ACC Championships this year, he won the 50 free in a new lifetime best of 18.74. At NCAAs, he added time and ended up finishing 15th with a time of 19.22. However, he did set a personal best of 42.70 in the 100 free at the same meet to finish 39th overall.

When asked about his focus meet for the summer, Curtiss responded by saying that will not be going to U.S. Nationals in July as he has to attend a wedding.

“I made this summer a light one, in terms of meet schedule,” Curtiss said. “I will return to a higher and normal training schedule starting next week, but [I want to] still focus on enjoying the rest of my summer.”

Despite taking on a lighter load this summer, Curtiss still has long-term goals for both his 50 and 100 free.

“My 50 free is a forever evolving technical battle, so I will continue to fine tune, and strengthen myself to achieve the fastest race possible.” Curtiss said. “For my 100, I am playing around with different technique and racing strategy, but with my trainers back home and at NC state, it will become more of a priority when we return to a normal and heavier training regiment.”

Used to go to that meet a lot and I remember how even though there was a lot of talent it was a slow long meet. What an outstanding swim during this part of the summer season!

this kid has more natural talent than anyone that ive ever seen. i was on the same club team with him in high school and would love to see how he has evolved in training. HACY practice and pancakes maybe?? that team does some GREAT stuff

“My 50 free is a forever evolving technical battle“ well spoken. Personally, I think he’s gonna be good. That kind of attitude is what gets you continuous improvements

Skipping Nationals for a wedding. This guy has understood life.
Awesome 50 free!

Great attitude ! This kid will go far!
Watch him get better at the 100 free ( sc and lc) and don’t be surprised with another top tier event before he graduates from NC STATE!
He will be a definite contender in the 50 free at
2024 INDY Olympic Trials !

I don’t know, you’re only at that level for a few years of your life. I regret forgoing some larger meets to go on family vacations, weddings, etc. You got the rest of your life to do that stuff

it will require a divorce for that statement to be true.