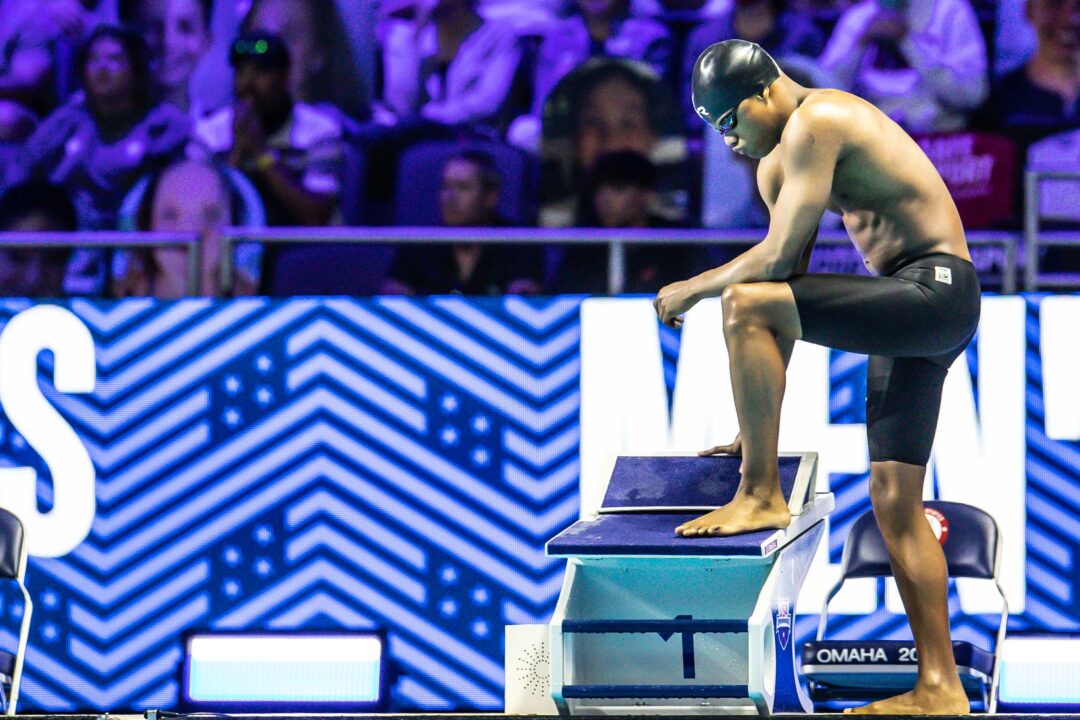 David Curtiss scratched out of the 'A' final of the 100 free at the Mission Viejo Pro Series, the only 'A' final scratch of the session. Archive photo via Jack Spitser/Spitser Photography

The Wolfpack’s David Curtiss has scratched the 100 free ‘A’ final, the only scratch out of an ‘A’ final for the session. Curtiss just qualified for the final, finishing 8th in a time of 50.85. That’s only about three-tenths off the personal best he set in April at the San Antonio stop of the Pro Series. Curtiss is only entered in the 50 free for the rest of the meet.

Curtiss offered a statement to SwimSwam on the reasoning for his scratch.

“The reason I’ve opted out of swimming the final of the 100 free is that I’ve reached my goal in prelims,” he said. “I’ve been training here and there, and the focus of this meet was for me to have fun and I did that. Light swim and heavy relaxation on my mini trip to California.”

Curtiss said he will still be contesting the 50 free on Saturday.

That 50 free is Curtiss’ specialty, and one where he’s already one of the fastest teenagers in history. As good as he is in the 50 free, though, his value to his collegiate program, at least, has ben limited by the lack of viable second and third events. He finished 16th at the ACC Championships in the 100 free and 29th in the 100 back, and in spite of winning the ACC title in the 50 free, was only the team’s lowest-scoring individual swimmer at that meet (tied with Rafal Kusto).

In long course, though, he can focus more on his singular specialty, the 50 free, which so far seems to be the crux of his future internationally.

There were also a slew of ‘B’ final scratches. Three men scratched out of the ‘B’ final of the 100 breast: 9th place qualifier Parker Macy, 10th place Jason Schreiber, and 12th place Matthew Jensen. That means that Colin Cosgrove, Max Gilsenan, and Connor Daigle will all get a second swim.

Texas’s Kyla Leibel scratched the ‘B’ final of the 400 free as the 13th place qualifier. In prelims, she swam 4:26.00. Earlier in the session, she’ll race in the ‘A’ final of the 100 free where she qualified in fifth.

Has there ever been a sprinter with the prototype of Curtiss that eventually developed into a great 100 LC FR swimmer? There must be someone out there, but my swim history brain is a bit tired to scour through SwimCloud. I’m talking about someone who is an elite 50 FR swimmer in both LCM and SCY, but has a huge drop-off to any other secondary event (he went his best time at NCAAs in the 100 FR and finished 39th, and doesn’t have anything else that would qualify for either OT Wave). Just saying, since it doesn’t seem like MA and CD are going away in the 50 FR anytime soon.

he’s 19, and wants to relax, that affects whether he’s professional?

Not with NIL David has a great deal with TYR

He actually swam 100 free in Monaco! Plus he swims 100s all the time. Curtiss is a one trick pony

You do know he swam the prelims right?

The man just wanted to swim and have fun, not every meet for the swimmers needs to be of high importance. If he’s wanting to just swim prelims let him do that. Chill out

Read the reason 😂 not every meet is a big one, let the man enjoy the cali beaches and break from college