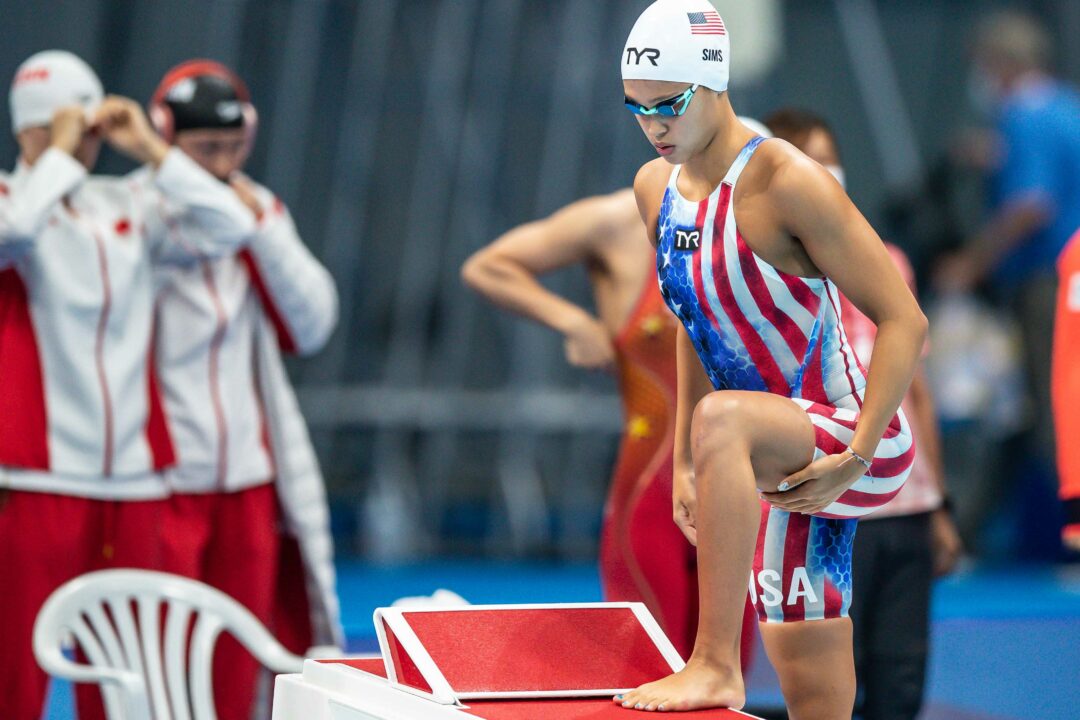 The Sandpipers of Nevada will be out in full force this weekend, including Olympians Bella Sims and Katie Grimes scheduled to swim full slates. Current photo via Jack Spitser/Spitser Photography

Over 1800 athletes, including many of USA Swimming’s brightest young stars, will converge on Greensboro, North Carolina, and Austin, Texas later this week for the Winter Junior Championships. With psych sheets for both Winter Juniors East and West dropping yesterday, we peer into what the highlights and top races may be. We already covered the East, and now we’ll take a look at the West.

The first individual race of the meet should provide plenty of fireworks, with two Tokyo 2020 Olympians slated to compete. Bella Sims, the Olympic silver medalist, top recruit in the class of 2023 and Florida commit, is the top seed in 4:32.13. Her PB is nearly five seconds ahead of Regan Smith’s meet record and currently ranks her as the eighth-fastest performer in history.

Sims isn’t the only Olympian in the race, however, as her club teammate Katie Grimes sits in the second seed at 4:37.36. In fact, Sandpipers holds 4 of the top 5 and 5 of the top 8 seeds in the event. Included among those five is 14-year-old Claire Weinstein, who recently moved to Las Vegas from New York to train with the Sandpiper distance group. Weinstein holds the fifth seed at 4:44.10.

In another race featuring a slew of Sandpiper girls in top several seeds, it is Justina Kozan who has the top spot at 4:05.67 from this meet two years ago. Kozan is swimming for Unattached-SET, having followed coach Mark Schubert following his retirement from Mission Viejo earlier this fall. The current meet record sits at 4:02.51 from Lakeside Seahawks’ Brooke Forde in 2016.

Sitting just behind Kozan is the Sandpiper Olympic duo of Grimes and Sims, with Grimes seeded second in 4:06.24 and Sims seeded third at 4:06.59.

A pair of Rose Bowl Aquatics teammates sit as the top two seeds in the men’s 200 free, with UVA 2023 commit Zach Larrick taking the top spot at 1:35.78 and Rex Maurer sitting second at 1:35.91. Three other swimmers are seeded under 1:37, with Nate Germonprez seeded third, Anders Aistars ranked fourth and Keaton Jones seeded fifth.

The sixth seed is 15-year-old Maximus Williamson of the North Texas Nadadores in the Dallas suburbs. Williamson, whose 13-14 LCM 200 free National Age Group Record was broken just last weekend during Thomas Heilman’s NAG frenzy at the US Open, comes in with a lifetime best of 1:37.09.

A pair of Colorado natives, Caroline Bricker from the Colorado Springs Swim Team and Emma Weber of the Denver Hilltoppers, come in as the top two seeds separated by just .01 in the women’s 100 breast.

Bricker, a publicly uncommitted high school junior, sits atop the psych sheet in 59.73, a time set last March, while Weber, a senior committed to UVA sits just behind her at 59.74 from this meet two years ago.

In another race shaping up to be a duel between the top two seeds, Swim Neptune’s Keaton Jones sits atop the psych sheet in 1:42.81. Jones, the #5 recruit in the class of 2023, has committed to head north from his Phoenix-area home to join the Cal Bears for college.

He will be challenged by Lake Oswego’s Nick Simons, who is seeded just .07 behind in 1:42.94. The Oregon native is a senior in high school who will join the Tennessee Volunteers for his college career starting in the fall.

Sitting in the fourth seed at 1:46.04 is Rose Bowl’s Ronald Dalmacio, who set several backstroke NAG’s as both a 10 and under and 11-12 and has been a part of Rose Bowl NAG relays with the aforementioned Zach Larrick and Rex Maurer.

Go Claire ! Good luck. Sandpipers are so lucky to have you!

Simons is gonna destroy the field here. This kid absolutely obliterated Trials in his swims and threw down some pretty impressive times at the Kevin Perry meet last month. Excited to see what he’s gonna do this month!

Don’t sleep on BCST’s Piper Enge in the 100 breast, seeded third. She just destroyed the Washington high school record in Federal Way and is only a sophomore (15].

Is Grimes in the portal?

Is Sims doing the mile? I think Grimes’s time will be bettered for sure with her 15:52 LC!