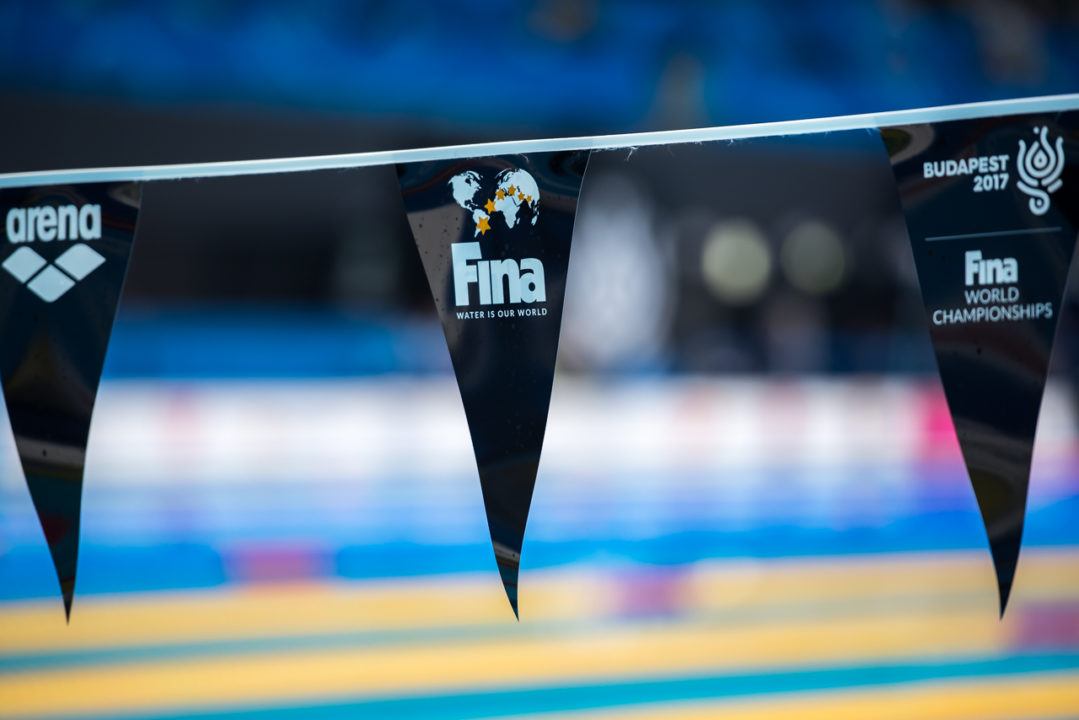 The U.S. forfeited 3 sets of medals as a result of a positive doping test for Matthew Willenbring, in addition to his swim in the 100 free. Stock photo via Peter Sukenik/www.petersukenik.com

FINA has formally updated its results for the men’s 400 medley relay at the 2017 World Junior Swimming Championships and requested the return of medals from the winning American relay.

In an updated decision released May 14th (4 months after the original decision), FINA said that in the original sanction, medals, awards, prizes, or prize-money was forfeited from the date of the test onward. FINA, however, requested the doping panel to specifically rule on the status of relay medals, which is what their new decision reflects.

That relay included American swimmer Matthew Willenbring, who tested positive for a banned substance at the meet, on the freestyle anchor leg. His 48.68 split was the second-fastest of the finals field. Willenbreng was found to have accidentally ingested medicine of a family friend that was left at his house in a pill bottle labeled as an over-the-counter pain reliever (read more here). By that accord, FINA reduced his suspension to 4 months from the maximum 4 years.

The latest decision reads as follows regarding the decision: “The Doping Panel was well aware that on August 28, 2017, the Athlete was a member of a winning Medley Relay but was content in its reasoned decision to limit the sanction imposed on the Athlete to the annulment and forfeiture of “individual results” (largely to protect the identity of the Athlete who was a minor at the time and whose identity the Doping Panel wanted to protect from public reporting). It remained an open question what decision, if any, FINA might elect to make regarding the status of the other members of the Medley Relay that won the event (with the Athlete) on August 28, 2017.”

The Doping Panel found that, “despite (its) sympathy to the Athlete’s teammates from the various Relays he participated on there is no alternative but to disqualify the results for all three Relays.”

While FINA originally removed only the relay results, as captured here by the Sports Integrity Initiative, they didn’t remove the bronze medal of the 100 free. Looking today, however, that result has been disqualified as well. That would follow the same pattern of logic that FINA used specifically in disqualifying the relay results: that the individual 100 free, swum even before the positive test, were to be negated because they came at the same ‘competition,’ which FINA spent time in their latest decision discussing.

Willenbring tested positive for the substance Hydrochlorathiazide, which is banned as a Class S5 Diuretic and masking agent. The substance’s medical uses include reducing high blood pressure and fluid retention, and treating a number of diseases and conditions including kidney stones. The drug is sold under a number of brand names and is available by prescription in the United States.

The original FINA decision indicated that relay results would not be impact, only individual results.

On net, the disqualifications cost the U.S. 1 gold and 1 silver medal. Willenbring’s future teammate at the University of Texas Daniel Krueger moved up to 3rd in the 100 free, so on a team-level that scratch didn’t impact the overall medal standings.

The hosts from the United States still maintained a healthy lead in the medals table. The changes jumped Russia by 1 spot from 6th to 5th place, ahead of Spain, while Australia vaulted from 15th to 12th thanks to the new-found silver medal.

Honestly, he should count his lucky stars, they went about as easy on him as they could have. As for the excuse… LOL

I don’t see why there’s a debate here. One member of a relay is tested positive. The relay is logically disqualified.

If it would be any foreign swimmer people on swimswam would be slaying him…. just saying…

And FINA and the IOC would just let him swim in the Olympics.

Only if he paid up.

If he was Russian or Chinese

If he was Russian, people here might be up in arms, but FINA and the IOC would let him swim in the Olympics with his teammate Effimova.

This is going to hurt Texas. Every relay he is on and any individual points he gets at NCAAs is going to be tainted his whole career now. No one is going to buy the argument he accidentally took a masking agent from his neighbor’s medicine.

It wasn’t his neighbor’s, it belonged to a former colleague of his mother.

It was an aunt if I remember the story corrrectly. It is a tough lesson but hopefully he has reached out to every teammate hurt by it. True test of his character will be if he not only accepts but apologizes for his actions to teammates.

“…was found to have accidentally ingested medicine of a family friend that was left at his house in a pill bottle labeled as an over-the-counter pain reliever”. I am laughing my ass off.

61
-5
Reply
USA people can cheat too
Reply to  Luigi

All the things that had to come together for that story to be true: Someone he knew happened to have this prescription, put it in an Advil bottle, visited his house right before Jr. Worlds, took his pills with him (I mean who just carries their pills around in their hands? Did this person not have a bag or a purse or what???), left them lying around somewhere, Matthew took the pills from a random place in the house instead of a medicine cabinet…. and lets not forget that Advil pills say “Advil” on them, but he just took these mystery pills anyways? I mean come on SwimSwam, be real. This kid is a cheater.

Completely agree. I wrote something similar in a prior thread. The story that he “accidentally “ took a family friend’s unlabeled medicine that just happens to be a banned masking agent is extremely sketchy and unbelievable.

27
-1
Reply
DMacNCheez
Reply to  USA people can cheat too

In the kid’s defense, if I needed some advil/ibuprofen/aspirin, and saw a bottle of it in my house, I would dump one into my hand and swallow it without question. I would never think, “Hmm, I should check to make sure someone didn’t switch these pills out” in my own house.

Are you telling me that when you were 17, if you found a bottle of common medicine in your house, you would carefully inspect it for authenticity before consuming? Taking an aspirin is one of those quick activities you don’t really think about.

If you or I needed aspirin, that’s exactly what we would do…but then neither of us are fast enough swimmers in this moment to have to worry about drug testing. The kid is swimming at a high enough level on a big enough program that he should have known better than to take something he wasn’t absolutely sure of…doping is constantly in the swimming headlines these days, so to be swimming at an international level and to not be aware of it to the point of insuring that what you think you’re taking is what you’re actually taking is absurd. Really the only questionable thing is how this was the best excuse that could be mustered.

7
0
Reply
luigi
Reply to  USA people can cheat too

There are so many, unlikely, things to come together for something like this to happen, that it sounds easier to get struck by lightning twice.