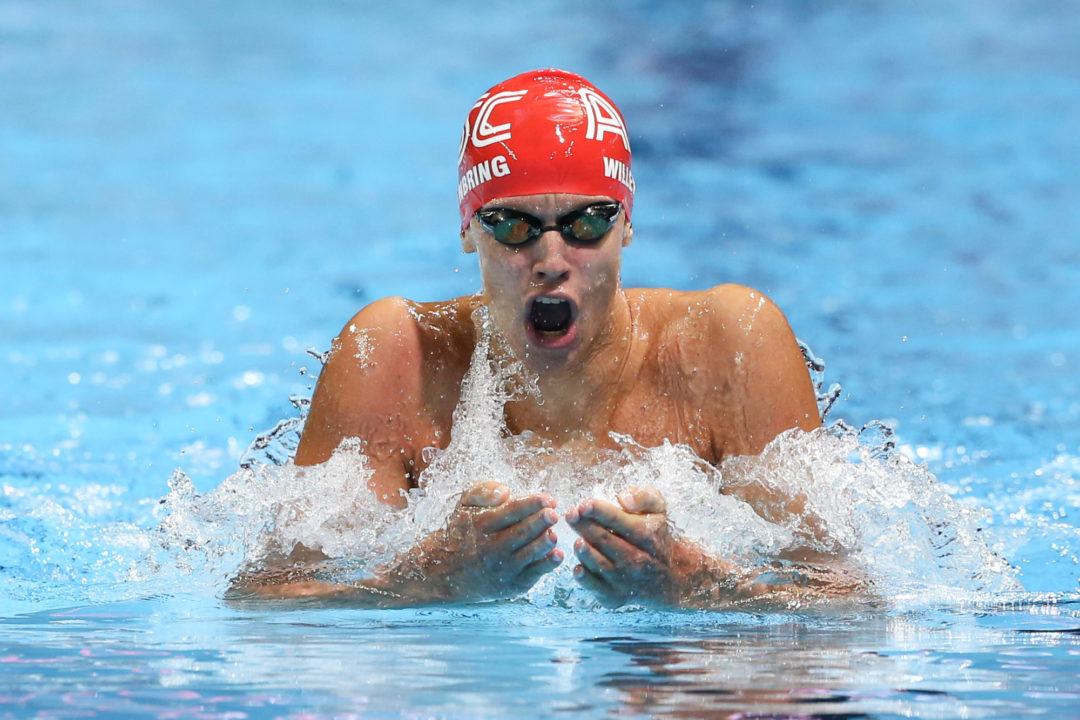 After news broke on Monday morning that American swimmer Matthew Willenbring had tested positive for a banned substance after the U.S.... Archive photo via Tim Binning/TheSwimPictures.com

After news broke on Monday morning that American swimmer Matthew Willenbring had tested positive for a banned substance after the U.S. won gold in the men’s 400 medley relay at last year’s World Junior Championships, his attorney, Howard Jacobs, contacted SwimSwam to share a press release with details of the test and proceedings. Jacobs also shared with SwimSwam the full FINA decision, filling in most of the details of the case.

Key details and answers about Willenbring’s positive test that were addressed in the press release and with the suspension:

The explanation above established in the FINA Doping Panel’s opinion that FINA did not demonstrated “that the Athlete acted with intent,” which makes the first cut of the maximum 4-year suspension for a first-time positive test down to 2 years.

The Panel continued on to discuss that because of his age, the requirements for “no significant fault or negligence to further reduce his suspension from 2 years are not in effect. Further, they believed the story of the mislabeled bottle left by a family friend, concluding that because his supplements did not show contamination in testing, and that no other health products or medicine in the family home contained HCTZ, and that the very low concentration, the likelihood that the concentration would’ve been ineffective in masking any substance. Those factors further reduced the suspension to 4 months.

FINA did note that the athlete was “blase” about taking a pain relief substance that he himself did not purchase and that he seemed to drop an otherwise-diligent attitude toward care of care with regard to pain medication.

Interestingly, the FINA Doping Panel in its original decision chose not to name or identify Willenbring in any public reporting because at the time he was under the age of 18. This is allowed by FINA rules, though there is discretion to publish the information in circumstances where it is deemed fit. Willenbring turned 18 on November 22nd, 2017 – before his hearing, but after his suspension began and after his positive test.

Willenbring began a voluntary suspension on October 19th, that included leaving all team practice and competitive activities. He then resumed training with his club during the last month of his suspension, as is allowed by FINA rules.

Jacobs is a well-known attorney in the Olympic space dealing, and among his many clients, he represented swimmers Park Tae Hwan, Yulia Efimova, and Jessica Hardy in their fights against doping suspensions. All of them received reduced suspensions from the maximum possible.

Good lord, what a horrible experience for Matthew and his family! I can’t imagine the fear and confusion they were all feeling with the positive test and then to be so attacked like they are here. And then all of the expense of his defense! Glad he was cleared, but they’ll never get that time and money back. Sounds incredibly stressful.

If he improves at UT then it might be an argument that he wasn’t trying to mask a PED/steroid. Problem is though that gains achieved can stay even after a steroid is stopped.

He just added almost 11 seconds in the 200IM todayso time will tell.

We can all learn from this mistake. I often mix different medications (Advil, Aleve, Melatonin, Cold medicine, Vitamins etc) in a single bottle when travelling. Mixing medications in a mislabelled bottle can not only be harmful but may put our athletes at risk. Don’t chance it!

You are kidding or you just travel within the US . At international airports there are counters where you must present all meds & scripts . Remember the American lady who was charged & facing prison for possessing Panadol Forte which is precription only in Japan plus she did she did not lodge .

I’m not kidding and have travelled internationally following my swimmer without any issues. None of my medications are prescription. Lesson learned though…

Not accusing this swimmer of anything, but what’s up with a lot of swimmers masking agents? Sun Yang, Hardy, Yefimova, Cielo.

So glad to read this was accidental. One of the finest families you will ever come across

Its amazing how quickly some people believe a pretty flimsy argument when presented by an American who actually tested positive to a banned substance, but those same people immediately cast doubt over a foreign swimmer’s performance even though they have never returned a positive test.

Whatever reason/excuse people have is neither here nor there for me. Interpretations are subjective and biased. However, the concentration of urine and the low reading of this test indicate that this was unlikely the result of intentional doping. Don’t think there is anything flimsy about the data. Nonetheless I’m a firm believer in strict liability so I would support a two year ban.

When Li Bingjie posted some quick swims, the first thing people jumped to was doping. No evidence, just because she’s chinese. https://swimswam.com/teenager-li-bingjie-cranks-out-400free-chinese-and-asian-records/

We now have a young American swimmer who has literally tested positive and people still don’t believe it?

There is literally no downside to doping in swimming. Think I’m going to start doping. Then again, results may vary since I’m black and not American.