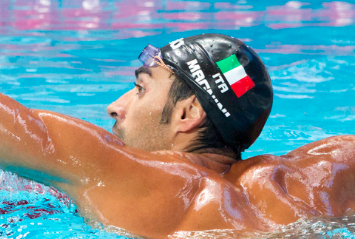 Two-time world champ Filippo Magnini is appealing a four-year doping ban to the Court of Arbitration for Sport, where he'll face a hearing on November 4. Archive photo via Tim Binning/TheSwimPictures.com

Two-time world champ Filippo Magnini is appealing a four-year doping ban to the Court of Arbitration for Sport, where he’ll face a hearing on November 4.

Magnini appears on the Court of Arbitration for Sport (CAS) calendar. His hearing, challenging NADO Italia, will take place on November 4.

The 37-year-old Magnini is now retired, but has continued to deny allegations of doping. Magnini and Michele Santucci were both sanctioned for their association with Italian nutritionist Guido Porcellini. Porcellini was banned for 30 years, and Italian media reported that Magnini was central to the case against Porcellini.

Both swimmers appealed their bans with a national anti-doping tribunal. Santucci won his appeal and had his suspension dropped, but Magnini’s appeal was rejected. It appears he’s appealed now to CAS, and should have his hearing in a little over a month.

The CAS calendar notably does not include any date for the case of Sun Yang. His CAS hearing was postponed earlier this fall, and CAS said it would likely take place no sooner than the end of October.

Here is what his appeal should be: Yes, I procured some PEDs, but they were all for my live-in girlfriend Federica.