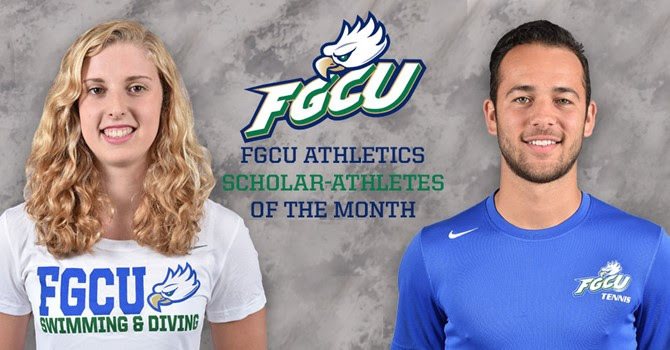 Each month during the school year, the FGCU Athletics Communication Office and Athletic Academic staff will choose a pair of Eagles as the FGCU Athletics Scholar-Athlete of the Month. Those selected for the honor will have exhibited a combination of superior athletic and overall academic success.

Latham (Deal, Kent, UK/Sir Roger Manwood’s School) is a Biochemistry major with a 3.89 cumulative GPA and most recently was one of five members of the swimming and diving team to collect a perfect 4.0 GPA in the fall. A two-time member of the Dean’s List with a GPA of 3.5 of higher and one-time President’s List recipient, Latham has been named to the FGCU Honor Roll each of her three semesters on campus and will attend the Student-Athlete Academics Honors Luncheon in her first year of eligibility this spring. Additionally, she not only earned CCSA All-Academic honors, but was also named a CSCAA First Team Scholar All-American in 2015-16.

In the pool, Latham currently holds the Eagles top times in the 50 free (22.57), 100 free (49.10) and 100 back (54.45) this season and turned in a NCAA ‘B’ cut at least once in each event. Her times in the 50 and 100 free rank 53rd and 47th in the country, respectively. Earlier this season, the United Kingdom native also swam the starting leg of FGCU’s record-setting 200 free relay that clocked a time of 1:29.73, which ranks 16th in the NCAA. She was named the CCSA Swimmer of the Week for the first time in her career after an impressive performance at the FGCU Classic.

Alfonzo (Hollywood, Fla./TCU/Florida Virtual School) is a Finance major with a 3.52 cumulative GPA in his three years at FGCU. The reigning ASUN Co-Scholar-Athlete of the Year, he is a two-time member of the Dean’s List for turning in a GPA of 3.5 or higher in the fall of 2014 and spring of 2015. Additionally, he has been named to the FGCU Honor Roll every semester on campus and will have attended the Student-Athlete Academic Honors Luncheon each of the past two years – his only years of eligibility.

On the court, Alfonzo is a senior leader for the Green and Blue. With a 1-1 record to this point in the season, Alfonzo dropped his opening match to Florida State’s Guy Iradukunda, the #59 ranked player in the NCAA, before responding to defeat Florida A&M’s Karlyn Small in straight sets the following day. In doubles action, he and teammate Ezequiel Cerrini (Sunny Isles Beach, Fla./Homeschool) opened the spring with a hard-fought loss to the Seminoles’ Iradukunda and Aziz Dougaz, 6-3.

Playing exclusively in the #1 and #2 singles positions each of the last three seasons, the Hollywood native has accumulated 22 dual-match wins and 38 overall wins in his career, with a team-leading 13 dual-match and 18 overall wins a season ago. Following his junior campaign that saw FGCU win the ASUN Regular Season Championship for the second straight season, he received ASUN First Team All-Conference honors to go along with his aforementioned scholar-athlete award. Additionally, he helped lead the Eagles to its first NCAA Tournament appearance in program history in 2015.