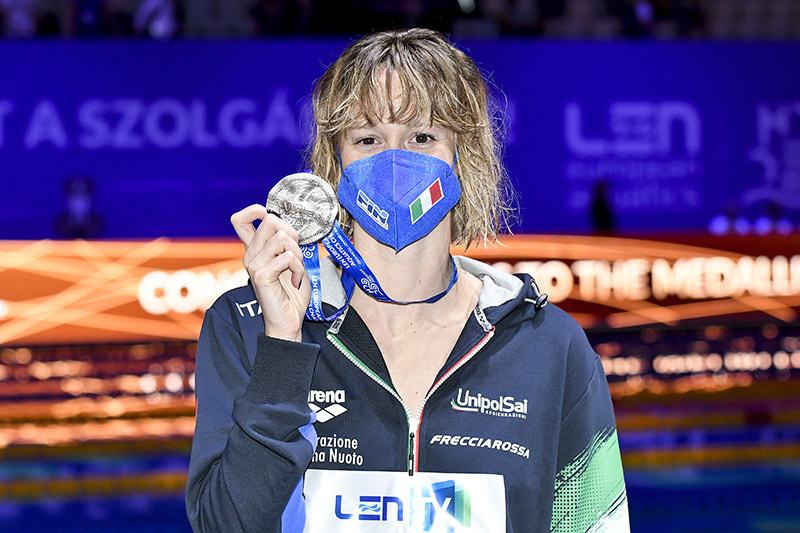 Following her 2nd place finish in the 200m freestyle at the European Championships, Federica Pellegrini said that she did not even intend to swim the event. Current photo via Andrea Staccioli / Deepbluemedia / Insidefoto

Following her second-place finish in the 200m freestyle at the 2021 European Championships, Italian Federica Pellegrini told reporters that she did not even intend to swim the event individually, instead planning to swim only relays at the Championships.

“I’m really very happy. When I came here, my original plan was just to swim the relays but when I saw how good it was going I decided to keep my entry in this event too,” Pellegrini, the reigning World Champion in the 200 freestyle, stated.

Pellegrini also said that she was “happy” with her final time of 1:56.26. “I’m very happy with my time, it’s more than a second better than my qualifying time. It was a very exciting and beautiful race.”

Hungarian superstar Katinka Hosszu expressed a different sentiment regarding her performance in the 200 butterfly final. Although she claimed that she swam a “good race,” Hosszu stated that she “cannot be satisfied.”

“I cannot be satisfied though it was a good race but now I don’t have the feeling that I gave everything and I always tell that I can only be content with a swim if I gave the maximum, then the placement is not that important,” Hosszu stated. “Today I think I chose the wrong tactics as I rather followed Bogi (Kapas) who usually didn’t push hard over the first half. My game plan differs as I wish to have a bit stronger first half so it was a good lesson to rather stick to my own plan that to adjust to others.”

Let’s see how much Hosszu “will give” tomorrow in 200IM final. She has to give a lot competing against 5 swimmers who showed practically same results as she did in semi-final.

During last seasons whenever Pellegrini performed exceptionally well at main meets of the season there were no prior hints that that is coming. And vice versa.
I wouldn’t make any conclusions based on her pretty modest performance at EC.

She always tends to say she doesn’t intend to swim 200 free.. I think it’s a strategy that works well for her because people assume she’s unprepared or hasn’t trained for 200 then she ends up swimming a 1:54

I am hoping she pulls the same trick in Tokyo on the path to a gold there in 200m free.

Nice training session for her!

She’s been one last 200 free away from not swimming it ever again for years now, maybe that’s her way of convincing herself to train for it at this stage in her career

She is a great swimmer and truly a winner, but she doesn’t have the luxury to focus on other events. This has always been her best event and will always be.

Nice article, thanks. On the main page it says “Federica Pellegrini tesis that” – am not cetain what that means. Please correct it thanks.

boy this gets old. didnt she “officially retire” from the 200free like 4 years ago already?
that was her own comment at the time at least.
( https://swimswam.com/pellegrini-going-top-retiring-200-free-worlds-gold/ )
idm her swimming it but why not just shut up about how you’re never swimming it again and how unprepared you always are.. allegedly. just seems very unlikeable.