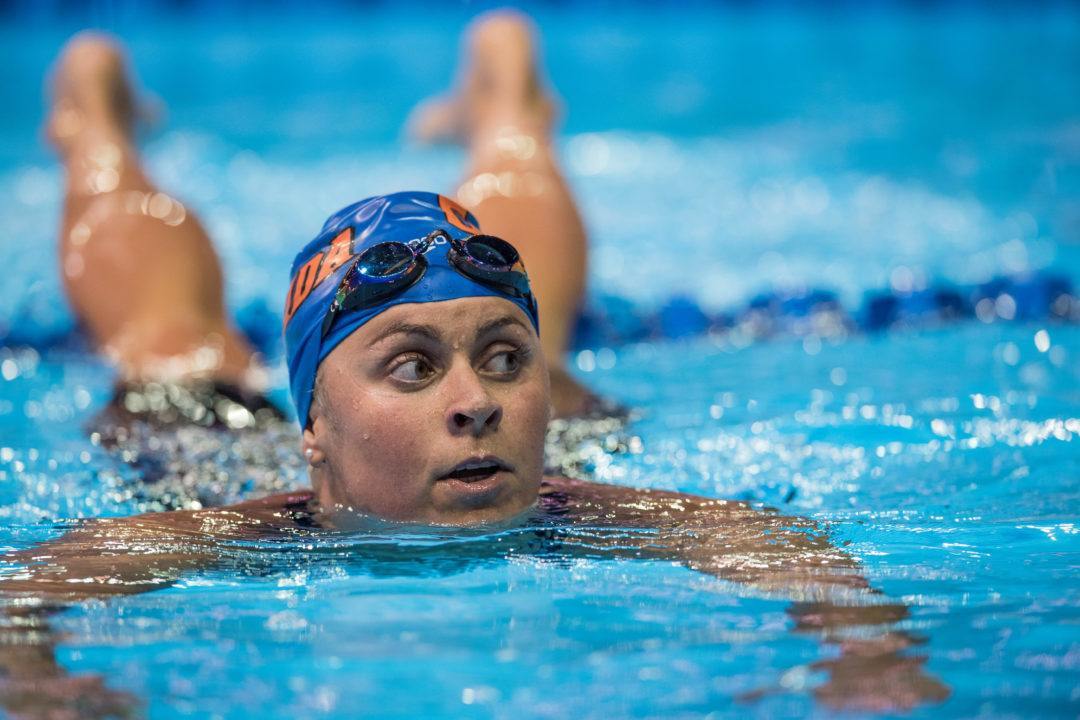 In Silver Lining, Beisel shares her journey that took her from staring at a black line every day to the far reaches of the world. Current photo via Mike Lewis/Ola Vista Photography

Elizabeth Beisel has a first-hand experience of the ups and downs in swimming. Throughout her career she won two Olympic medals, made three Olympic teams, and was an Olympic captain at her final games. In Silver Lining, she shares her journey that took her from staring at a black line every day to the far reaches of the world.

Sitting in the ready room, I thought about what Coach Troy had said. He was arguably the greatest coach in the world, and I was certain of what he said. If I could just touch first at the 300, the gold medal was mine. It had been a long road, but I had done the work and was finally ready to rise to the occasion when it came to my racing anxiety. Sitting there, minutes away from my event, I knew that my wildest dream was about to come true. The venue was jam-packed with people, and everyone was enthusiastically cheering and screaming, waving various colored flags and poster board signs. My entire family was in the stands. My brother Danny was sitting with the Olympic snowboarder, Shaun White, and even Bill Gates was watching. Once they announced my lane, I walked out and waved to the crowd. I was ready to dive in and show everyone that I could rise to the occasion, and make it known that not only was I the best, but I could handle that type of pressure. I went into that race the World Champion, but I was going to leave the Olympic gold medalist.

I stretched my arms out one final time before climbing onto the block. “Take your mark.” Lunging forward, I positioned myself for my dive. “Beep.” We were off. The first 100 of butterfly I paced myself and stayed towards the back, but the pack remained fairly even. Going into backstroke was where I would make my move. I made the transition and pulled ferociously, my arms cutting cleanly through the water, each stroke bringing me closer to the lead. By the end of backstroke, I had surpassed every swimmer except for Katinka Hosszu from Hungary who was in the lane next to me. I hit the wall, pushed off and during the first 50 of breaststroke I took the lead. When I realized I had secured the top spot, I revved up my pace and pushed myself as hard as I could. I made each pull concise and glided easily through the water, moving away from the rest of the competitors. By the time I touched the wall at the 300, I had a substantial lead. I was first, and I was sure that I was first by a lot. My heart skipped a beat when I completed that turn, knowing that I was about to be an Olympic gold medalist.

Once I hit the freestyle leg, a second wind came with knowing that I was about to do what I had dreamed about since I was a little girl. One hundred meters left, and I had accomplished the goal I had spent the last twelve years chasing. Despite that I knew I was first, I willed myself to go faster. I wanted to go as fast as possible, and I was literally thrashing through the pool doing everything possible to hold onto as much water as I could. Just a little farther and I was there. This was it. Olympic Gold. Finally.