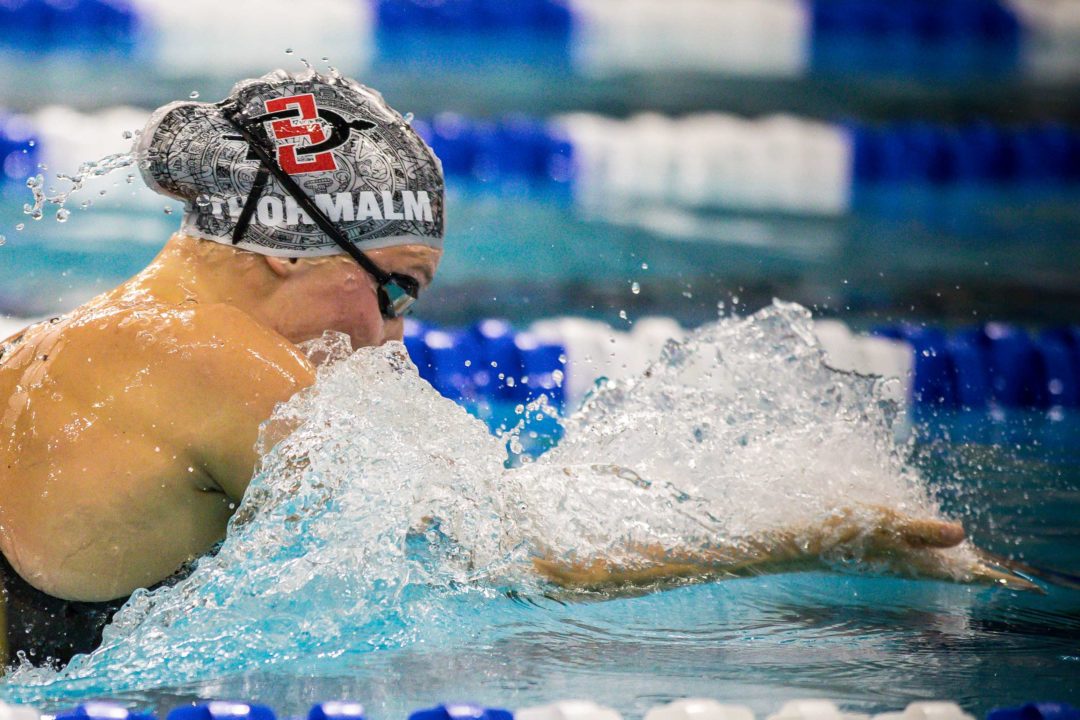 Over the past couple days, invites around the country have hosted their 200 medley relay races. Here are some of the best splits from some of the best relays. Archive photo via Jack Spitser/Spitser Photography

Here are eight 200 medley relay splits that are so fast, that if you blink, you might miss them:

1. Matthew Menke, Alabama, Tennessee Invite: 20.65
The Alabama junior led off his gold-winning relay with a split that tied Coleman Stewart as the twelfth-fastest 50 back relay split, ever. While Ryan Murphy dominates the faster splits, including the fastest at 20.20, this is Menke’s fastest relay split, and it’s not even at a championship meet. Comparatively, at the 2021 NCAA championships, Menke swam a 20.98 during the 200 medley relay.

Berkoff, a junior from NC State, also swam the back leg for the winning relay on Friday, tying Olivia Smoliga for the tenth-fastest relay split, ever. Maggie MacNeil has the current fastest time at 23.02, which she set in February 2021. But Berkoff is no stranger to fast backstroke. In 2021, she won the NCAA title in the 100 back, and she also swam the backstroke leg of the NCAA-winning 200 medley. Her split then was 23.27, the third-fastest split ever.

Swimming on the same team as Menke, the Alabama junior rocked a 22.97 50 breaststroke split Friday night. The time clocks in as the 21st-fastest, tying with Mikuta (below) and Ian Finnerty from 2018. Maas was part of the Crimson Tide’s 200 medley relay at the 2021 NCAAs, which finished 12th. His split then was 23.79, almost a second slower than his time on Friday.

The Auburn sophomore swam the breaststroke leg at the 2021 Georgia Tech Fall Invitational, helping his team place fourth. His split, comparatively, at SEC Championships last season was 23.57, and he didn’t compete at the 2021 NCAA championships. With about three months until this year’s SEC Championships, who knows how fast he’ll go then?

Swimming on the same relay team as Berkoff, NC State senior Sophie Hansson clocked in a 25.96 breaststroke split, the eleventh-fastest ever. The fastest split, as well as most of the top 10, belong to Lilly King (25.36). She’s just .04 off her breaststroke split from the 2021 NCAA Championships (25.92), which not only helped her team win the title but also gave Hansson the ninth-fastest relay split, tied with King.

The SDSU senior’s split is fast, but especially so for a D1 mid-major team. Thormalm was a member of the winning team at the Phill Hansel Invite, and she’s also the current school record holder in the 100 and 200 breast. Last year, she did not compete on a relay at NCAA Championships, and she swam the butterfly leg of the SDSU team at the Mountain West Championships.

The Dutch swimmer and NC State junior flew through the pool to earn this split, and to help earn his team the win. It’s the ninth-fastest split ever, but only because four people are tied with the fifth-fastest time (19.66) and two are tied with the third-fastest time (19.60). In 2019, Korstanje helped take the ACC record in the event with a 19.81 split; he did not compete at the 2021 NCAA Championships.

Minakov, a Stanford redshirt freshman, swam this split in just the second medley relay he participated in while in college. At his first race, during the Stanford and Cal triple distance meet, he swam a 20.65 fly split.

Eric Friese (fly) was 19.76 for Florida this weekend when he was 19.87 at NCs last year. They lost the 200 MR at NCs to Louisville by three-tenths, so splits like that will go a long way to making up the difference.

Would be very interesting to see the top 5 to 10 relay splits from all of this weekend’s Invites. Seems like a handful of 18 freestyle splits, but I wonder who had the most/fastest. I saw 18.6 from Purdue.

Fantasy Swimming anyone? Build your fastest medley relay based on splits from different schools?