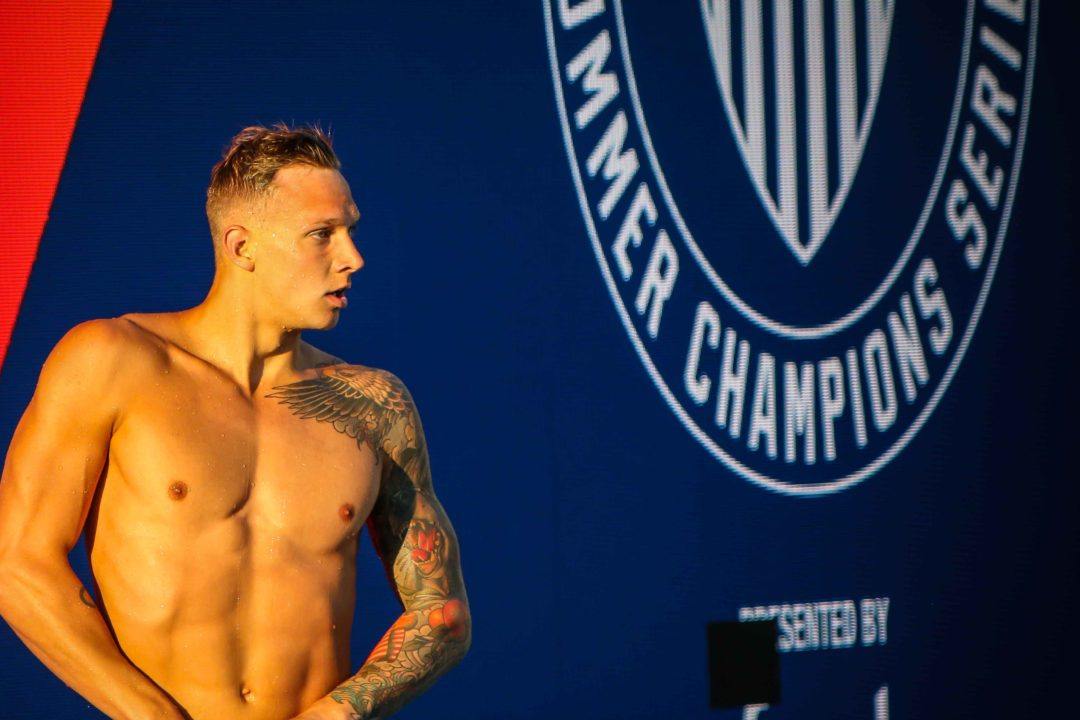 Caeleb Dressel was the top money-earner from the ISL meet in Naples and Sarah Sjostrom leads all earners for the series. Current photo via Jack Spitser/Spitser Photography

Caeleb Dressel was the top money-earner from the ISL meet in Naples and Sarah Sjostrom leads all earners for the series. Meanwhile, the disparity between winning teams and losing teams continues, as Energy Standard and the Cali Condors have each won more than the bottom two teams combined.

Dressel’s $13,500 haul was exactly what Sjostrom won in Indy to lead all earners. Sjostrom added another $12,900 and leads all series earners by almost ten thousand dollars. The skins race continues to be the key money event, as five of the top seven series earners have competed in the skins events at one or both meets.

The ISL money format clearly favors winning teams, and the degree of that divide is increasing. Both Energy Standard ($141,300 as a team in two meets) has earned far more than the Aqua Centurions ($47,400) and DC Trident ($47,850) combined. In fact, just their skins race aces (Sjostrom and Florent Manaudou) alone have earned nearly as much as either of the two bottom teams. The Cali Condors ($122,250) have also earned more than the bottom two teams combined.

Athletes and relays earn money for top-4 finishes under the following system:

Note: we’ve heard rumblings of a $5,000 bonus for meet MVPs, but there’s no rule on the books suggesting that. For now, we’re not including it in our calculations.

Wouldn’t be great for viewers to watch 3 rounds of a 400. Got to remember that for the entire ISL to be viable that they need to appeal to a larger audience outside of the standard swimming community. The skins race is great, but the sprint races draw the most eyeball attention in the USA.

That is the object….I doubt it is working….at least not in the USA! Showing meet vs football and no commercials…not sure they are getting the visibility they want or need.

That’s why I said two rounds and yeah some fans would like to see that.

Not sure about the longer distances, but I thought it would be neat if there were skins races for each of the 4 strokes

If we’re going to do fun things with a 400, it should be an elimination 400 (e.g. the last two after every 100m get eliminated). If you’ve never watched an elimination mile in track and field (roughly the same amount of time as a 400), they’re tons of fun to spectate.

Elimination 400 IM would be hilarious / torture.

Would be much harder than track to implement, how would you inform the eliminated swimmers after each distance?

I think this would be incredibly entertaining. How would people swim it? Fly and die? What kind of times would the top swimmers be able to post while making sure they’re positioned well enough to continue?

Unsure if 400 SCM would have counters, but either way you could just have them display the red if they have need to stop. Sure, they’d have to swim an extra 25 but w/e

For everything but back, maybe just a screen on the bottom of the pool with an x or check mark.

Could do a 200 free where someone gets eliminated each 50

Not sure if an elimination would work. It would be unfair to back half swimmers like Kalisz and Litherland. Especially IM where someone could be weak in fly but great in everything else but get eliminated because fly is first in IM. 400 free elimination would be a better choice but still have the back halvers problem. But it would be fun to watch. 🙂

track and field miles don’t have lanes that people have to stick in. I don’t think the last 100 where the only two swimmers left are swimming in lanes 3 and 7 would be very fun

What? That would make it even more hilarious. STOP BEING BUZZKILLS.

I would stick to a single stroke for an elimination “last man swimming” type of an event. But I would say, don’t pick a standard distance, do something different like a 300m swim where elimination begins after the first 100. Eliminate the last two swimmers for every 50 after the first 100 and then you are down to two on the last 50! How awesome would that be!?! Also, I liked the ideas on here for red lights or “x’s” to indicate to the swimmer that they are eliminated. They can probably make attachments for the lane ropes so they don’t have to wait until the next wall to find out if they are eliminated. Can we make this happen!!?

The main problem would people would just flat out quit when they were out of the race. Dressel’s body length win over Flo in a 50 would turn into 25 yards or more in the longer events. No one wants to see that.

she is doing great

I don’t get what they’re putting so much weight, money and points wise, on the skins?

Yeah, it *seems* like it should be awesome TV, but in reality, they haven’t been that exciting so far. At the championship, though, it could be a real slugfest…

Simone could get big bucks for the highest bidder!

I agree – maybe *more* points works, but having skins be double points seems like to much. Feel like it invalidates the efforts of the other swimmers a bit.

This is their first season, I assume there will be some tweaking should they continue. My daughter & I have enjoyed watching.