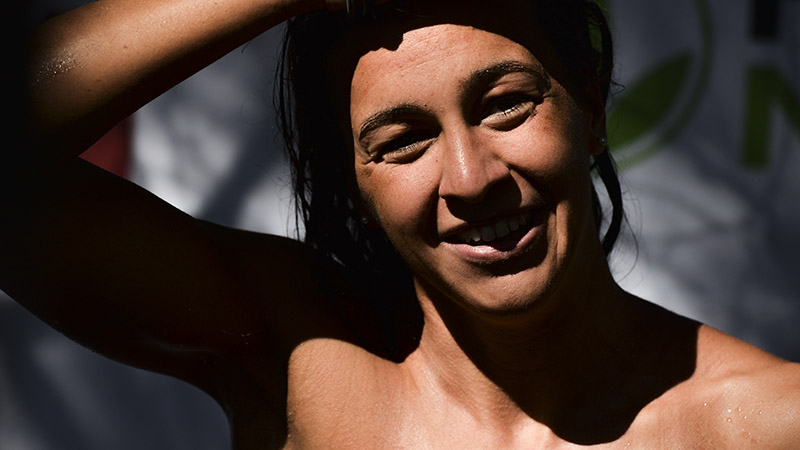 The 25-year old Arianna Bridi has been prescribed "total rest" to treat inflammation in her heart. She won bronze medals in the 10km and 25km races at Worlds in 2017. Archive photo via Deepbluemedia photo

Italian open water swimmer Arianna Bridi will skip next month’s European Championships due to “mild myocarditis,” or inflammation of the heart.

Bridi told SwimSwam Italia exclusively that the condition was revealed in a routine sports physical after returning from the Italian Championships a few weeks ago.

“When I returned from the Italian Championships, I had a routine medical-sports examination that all athletes do every season, and immediately the doctors realized that something was wrong,” Bridi said. “We did tests, including an MRI with contrast fluid, and I was diagnosed with mild myocarditis. ”

Bridi, who won bronze medals in the 10km and 25km open water races at the 2017 World Aquatics Championships, is not qualified for the Tokyo 2020 Olympic Games. She placed just 13th in the first Olympic qualifying opportunity, the 10km race at the 2019 World Championships. Because her countrymate Rachele Bruni placed 3rd, Italy cannot qualify another swimmer for the Olympic Games in that event.

The 25-year old says that she feels fine, physically, but that her only choice to treat the condition is total rest, which has kept her out of the water completely.

“Physically I am fine, I have no particular symptoms or sensations, and this is good,” Bridi says. “Mentally, I’m a little more downhearted. We were working well and preparing for the European Championships, the training was proceeding in the right way. When they told me that something was wrong, I could hardly believe it because I was strong in training, despite the tiredness. Now the only cure is total rest so from that day I have not entered the water anymore. Myocarditis in my case was caused by a virus so it is not a chronic problem.”

Bridi says that she’ll spend part of her time in Piombino with her training partners and part of the time with her family in Trento.

“It will be difficult for me to stay totally relaxed as I love to go running even on vacation and stay active. But it’s the right thing to do and I’m sure the first few weeks will pass quickly. It was not easy to remain lucid and focused, I want to thank my coach who jumped through hoops to keep me calm and the Army Olympic Sports Center that supports me even at this moment.

“I have a checkup in about a month. But regardless of the outcome I will not go back to swimming immediately, there is no rush and no short-term commitment so we will start again calmly when we can do it without uncertainty. ”

The open water racing at the European Championships in Budapest will be held from May 12-16.

In September, Bridi won the Capri-Naples open water marathon and set the new record in that course, for men or women.

Bridi is originally from Trento, Italy and trains in Rome at the Army Olympic Sports Center under the guidance of Fabrizio Antonelli.

Just came across this article today. https://www.reuters.com/world/middle-east/israel-examining-heart-inflammation-cases-people-who-received-pfizer-covid-shot-2021-04-25/. “Most of the cases were reported among people up to age 30.” Full disclosure, I have received both shots of Pfizer. Just sharing info, hopefully it is unrelated.