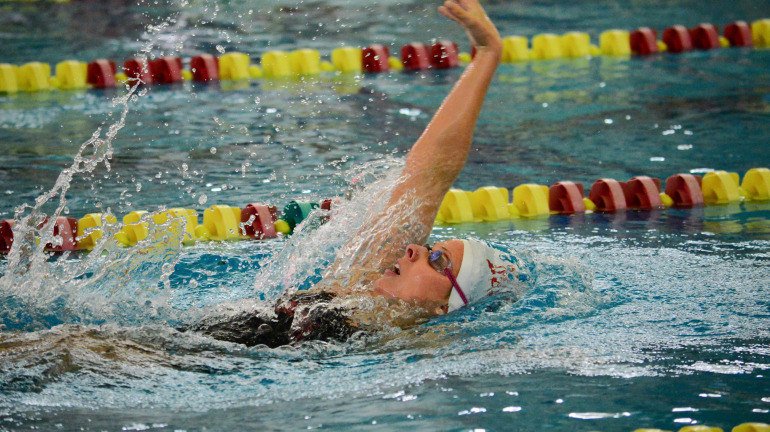 It's looking like the University of South Dakota men are within reach of unseating Denver who has won 7-straight Summit League Champs. Stock photo via University of Denver Athletics

Continuing with their dominant performance from day 1, the women of the University of Denver picked up gold in all but 1 event on day 2 of the meet. Their first win came from Emily Vandenberg in the 400 IM who swam a 4:18.91, adding to her 200 IM victory of day 1 of the meet. Also returning to the podium was 200 IM bronze medalist, Uma Knaven who swam to a silver medal for Denver (4:20.60) while teammate Charlotte Simon made it a Denver sweep with bronze (4:21.11).

Following Vanderberg’s lead, Inés Marin won a second title by taking first place in the 200 freestyle with a 1:49.47. That pairs with her winning performance in the 100 fly yesterday when she won with a 55.48. 50 freestyle silver medalist Aysia Leckie also collected silver in the 200 freestyle (1:51.32) for Denver while Angie Lindsey made it a second straight sweep for the team, taking bronze with aa 1:52.10.

The first non-Denver individual medalist came in the 100 breast as Caroline Gardner took the bronze medal with a 1:03.46 which was within a second of Sophia Bricker‘s 1:02.88 for gold and Brandi Vu‘s 1:03.16 for silver.

The University of Denver found themselves not in a winning position for the first time in the 100 backstroke as the University of South Dakota’s Sianne Downes out-touched Denver’s Sofia Nosack for the gold. Downes was a 56.64 in the event to get in just ahead of Nosack’s 56.99. South Dakota scored a 1-3 finish as Lucie Anderson joined Nosack on the podium by posting a 57.14 for bronze.

Denver’s final individual victory on the women’s side came in the 3-meter diving event as Olivia Gordon scored 294.50 points for first place. That’s an improvement from her performance on day 1 when she took silver in the 1-meter. Yesterday’s gold medalist Stella Fairbanks dropped to 2nd place today, scoring 274.45 on the 3-meter for the University of South Dakota while Quincee Simonson for South Dakota State was within inches of Fairbanks’ score, scoring a 274.25 for third place.

The University of Denver is down a couple of men at this year’s championships and the University of South Dakota is taking full advantage by trying to establish the first non-Denver Summit League title in 8 seasons.

Riley Babson provided resistance from Denver in the first individual event of day 2 by winning the men’s 400 IM with a 3:57.20. That was a solid drop from prelims swim of 3:57.20 and enough to establish some distance between himself and silver medalist Cayden Christianson who was a 4:01.56 for South Dakota State. The University of South Dakota made their way onto the podium as well with a 4:03.23 swim from Griffin Wolner.

The win for Babson was an improvement upon his silver medal performance at last year’s Championships. Notably, Trent Panzera was absent from the event and meet this year having won the event last year as a junior.

Next up, Valparaiso University actually nabbed their first win of the session as Dominic May collected the 200 freestyle title. May swam a 1:38.43 to touch just before the University of South Dakota’s Charlie Bean and Denver’s Darragh Mahns who were 1:39.20 and 1:39.57, respectively. That was an improvement for all three of them from where they were in the 50 freestyle on day 1. In the 50, May and Mahns actually tied for fourth place (20.55) while Bean took sixth (20.62).

Denver won a second individual title on day 2 as Kelby Modene hit a 55.67 100 breast to shave 0.10 off his time from prelims. The race was down to the touch, however, as Billy Bennet came in just a fraction of a second later in a 55.74 for Valparaiso while Gavin Wheeler was a 55.88 to take bronze for South Dakota State.

Both of last year’s top 2 finishers; Adriel Sanes and Cy Jager were 1-2 in the event at the 2020 Championships as juniors and aren’t racing this year for Denver. Should they have raced the event this year, they would have likely been able to nab the victory, having posted 52.32 and 53.52 in the final last year, respectively.

One event that hurt Denver significantly was the men’s 100 backstroke. In that event, they didn’t have any swimmers race in either the A or B final. The University of South Dakota went 1-2 in the event thanks to Zach Kopp‘s 49.52 and Brady Torborg‘s 49.97. Marcus Benson also snuck under the 50-second mark for South Dakota State, hitting a 49.98 for the bronze medal.

Patrick Groters would have likely provided some points for Denver in the event had he been present at the meet, having placed second at last year’s championships with a 48.26. Groters won silver as a sophomore last year but didn’t race for Denver during what would have been his junior year.

Notable are the absent top Denver swimmers, whom have chosen not to swim, quit the sport or been removed from the team. Sad to see that a respected team, build by Coaches who actually cared about the athletes, destroyed by Coaches who care zero about the athletes and have no clue what the characteristics of a Coach are. Denver leadership above the Head Coaches should go back and read their mission and vision statements.

Y’all needa stop. If you wanted to race you should’ve been there. Don’t quit and then just be sour grapes all weekend about those who chose to stick it out.

I understand the FOMO, but y’all had choices, and you made them, and here we are. Look forward, not backward.

Unfortunately, a lot of these athletes did not get much of a choice. Coaches took swift and severe action without ever gathering all the facts. Ruined many athletic careers and severely complicated their academic paths. When it became evident the coaches were wrong, they let their ego get in the way and doubled down, pushing away even more swimmers.

Coaches should be ambassadors to the sport, not ruin it for so many. Overall a sad impact on the sport of swimming.

3
-6
Reply
The insider
Reply to  swimapologist

@swimapologist no one has FOMO if anything it’s the exact opposite. People who aren’t there and people who are there don’t want to be there. Du should stop hiding information as well as stop using athletes that are no longer Associated with the program. Get real facts. No one wants to see opinions only facts!

You need to stop assuming without knowing the facts. Some of the swimmers made their own decisions about not wanting to swim for DU, but some of the swimmers did not have that opportunity. DU Men’s Swimming team was a very close-knit group. The Coaching staff was incapable of dealing with young adult men and her bullying tactics to get what she wanted obviously did not work so she decided that getting rid of the leaders of the team would give her a team to shape. As any educated person in the educational field knows, that is not how it works.

Woof. Brutal. I can see why nobody in the admin wants to discuss this with you.

4
-4
Reply
The insider
Reply to  swimapologist

Ooof you’re wrong again! Admin doesn’t discuss with anyone! Ugh can someone come get this mans he doesn’t know what he’s talking about again

interesting, how you just gave yourself away. If this administration for 1 second believed they handled this situation correctly, this team would have had the opportunity to be rebuilding, healing and would have been at Conference full force and strong. These articles would not have been mentioning the swimmers that are absent.

You want the truth? Ask for this team to be investigated.Ask the NCAA ,the summit league, Du For a full top to bottom review of this program.Ask the coach and the school to go on record and tell everyone about the hazing and more.The coach is more important than the team just ask her she will tell you. Let the coach walk all over everyone. Just don’t tell any one because you were the past and she has more kids to treat poorly going forward. Don’t tell the swim world how bad you were treated by the coach and the school because you mean nothing to us and we don’t care about you or your family or your future.The coach… Read more »

Administration made the mistakes by making an example out of the team thanks to their faithful COVID-scared snitches who told them about the team doing something it technically wasn’t supposed to do when they know every other team at the school does the exact same thing. The former head coach ended up gone because of standing up to the admin for the athletes breaking clearly defined rules, why would the new coaches put themselves in the same situation knowing that?

This comment is only barely-inteligible, but I think I can make two things out of it:

1) Definitely don’t sign these transfers, because their expectation is to break rules and get away with it, and
2) The old coach was fired because the athletes have a history of breaking rules and he enabled them?

My god this is the weirdest set of defenses I’ve ever seen in these comments.

Let’s celebrate the fact that Denver men made it happen with 12 swimmers present in over 90% of all the finals (freshmen and sophomores).They went through a rough year and coaches have done a terrific job supporting the entire team. To be honest it has been a challenge for many BUT the fact remains that this team will knock it out of the pool next year with all the talent they have and coming in!!! Congrats to the DU women and men who all kept their positive outlook over the last 8 months!!!! Time to move on…go pio’s