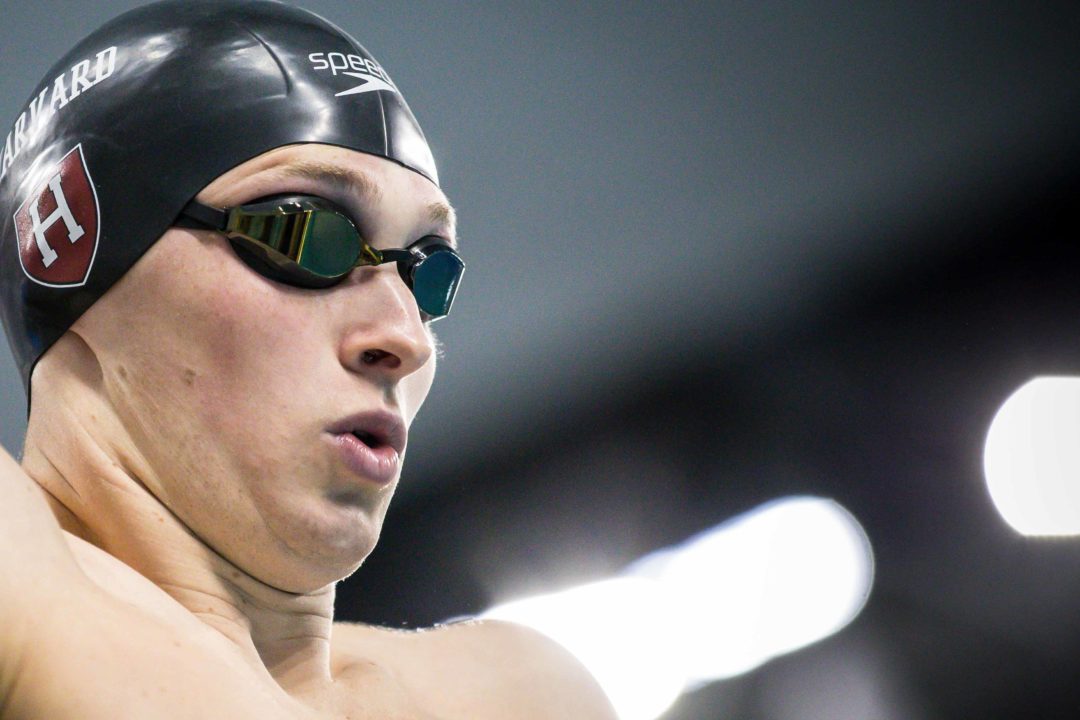 Farris, who swam the fastest 200 yard freestyle in history at the NCAA Championships, will race alongside other big names like Caeleb Dressel, Chase Kalisz, Olivia Smoliga, and Melanie Margalis next weekend. Archive photo via Jack Spitser/Spitser Photography

While the official party of American swimming will be in Bloomington, Indiana next weekend at the Pro Swim Series stop, there will be another big party happening: this one in Atlanta at the 2019 Atlanta Classic Swim Meet. The 2019 edition of the meet is arguably the most impressive field since the inaugural edition in 2016, when Nathan Adrian and Katie Ledecky raced (and Michael Phelps was scheduled to race, before pulling-out at the last minute).

In fact, this year’s field arguably rivals that of the Bloomington Pro Swim Series stop, certainly at the top end of the field, and in number of entries, as swimmers based out of the southeastern United States will converge upon the Georgia Tech pool.

That includes both pro and collegiate groups from the University of Florida, Tennessee, Florida State, Kentucky, Auburn, and Georgia, among others. Among the names on the entry sheets: Caeleb Dressel, who has 2 Olympic gold medals and is the defending World Champion in 13 events between long course and short course meets.

Also present at the meet will be Atlanta native Dean Farris, who swam the fastest 200 yard free in history last year to end his junior season at Harvard. This will be his first long course meet since that historic swim.

The women’s field is even deeper than the men’s, with 4 members of the U.S. team for this summer’s World Championships present: Hali Flickinger, Melanie Margalis, and Olivia Smoliga,  They top an impressive field of women that include NCAA Record holder Erika Brown, National Age Group Record breaker Kate Douglass and comeback swimmer Natalie Hinds.

Also scheduled to race in the men’s meet is Chase Kalisz: the defending World Champion in the 200 and 400 IMs. He’s scheduled to swim 4 races, but the 400 IM is not among them. Instead, he’ll race the 100 breast, 200 breast, 200 fly and 200 IM. Kalisz also didn’t race the 400 IM at the FINA Champions Series this weekend in Budapest (where it wasn’t offered), meaning that he’s only got 2 swims in Richmond in that race under his belt so far this season. We assume that he was eligible to, as the defending World Champion, but he didn’t.

Dont know about that. Dressel flexed his endurance in the 2 free at Richmond, but Phelps is… Phelps. Dont think anyone’s touching the 2 fly for awhile.
2 free will be interesting this summer though.

No active swimmer has been 1.43 flat start in a textile, so it would astonishing if we see someone go 1.41 this summer.

Um no.
Biedermann’s 2FR record is in absolutely no danger.
If the stars line up exactly, Phelps’ 2FLY record might get rattled but it going down this seems very unlikely.
Methinks I’m taking such comments too seriously and the above post is yet another Ferris/Dressel meme…

Really incredible that so many swimming fans took seriously my assertions of the two WRs in danger (one, Biedermann’s 1.42.00 perhaps the most difficult to beat on the men’s side with that of Zhang Lin in the 800 free).
In an in-season meet? With Dressel in his first appearance in years in the LCM 200 fly? And Probably Dressel in Atlanta will be in the midst of another heavy block of training considering that he performed well at the last stop of Grand Prix. And it’ll be Farris first LC meet so I obvioulsy expect absolutely not scintillating results for both..
.

*Our Lord Dean is entered in 6 events, including the 100 fly.

I don’t think brown is on the world team like you said? Still exciting to watch her though

You’re right, I thought she had made the relay but she didn’t.

Click bait. I thought he might actually be racing alongside Margalis and Smoliga. I guess I had the wrong definition for “alongside” in my head.

Hope no athletes are flying Delta, I slept on the ground last week after they canceled a flight in Atlanta. Stick to Farris Express Airlines, where there’s always a need, a need for Dean.

Are some entered in this meet and Bloomington?

Its official, Dean Farris headlines create more buzz than Dressel headlines, otherwise Caeleb would be in this. And its clearly because Dean is the far superior swimmer.