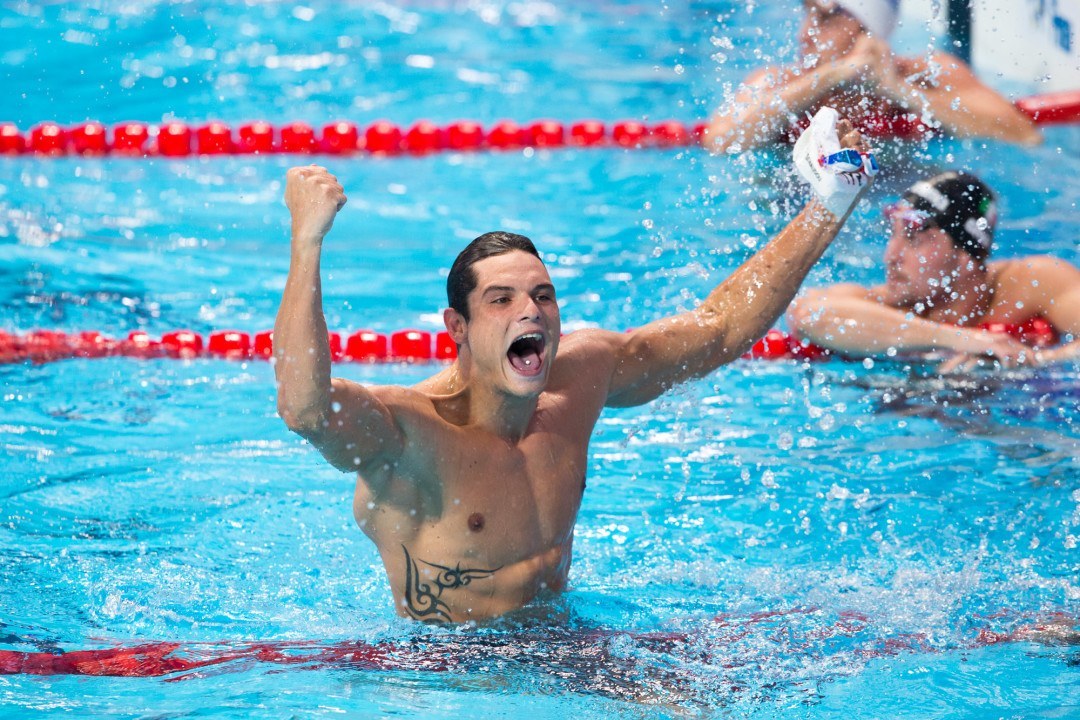 Florent Manaudou finally gets his opportunity to shine individually here in Rio with the men's 50 free getting underway today. Archive photo via Tim Binning/TheSwimPictures.com

After just one swim through five days of competition, French star Florent Manaudou will finally make his individual debut here in Rio in the men’s 50 free heats.

After finishing 3rd in a close 100 free at France’s Olympic Trials, Manaudou turned it into a positive saying now he could put all his energy into the 50. Despite this, he had the 5th fastest split in the entire field on the men’s 400 free relay, helping France to a silver medal.

With his premier event finally here, it’s time for Manaudou to regain his spot at the top of the podium. In London he had an unexpected win out of lane 7 in the final, but over the past two years he’s been the class of the men’s 50 free throughout the world.

He won the World Championship title last year by an absurd three tenths of a second, and will look to be the first person to individually defend their Olympic title at this meet (though it could conceivably happen from someone else before he gets the chance).

Manaudou will swim out of lane 4 in the 11th and final heat this morning, joined by Brazilian hopefuls Bruno Fratus and Italo Duarte (the man who knocked Cesar Cielo out of the Olympics).

Americans Nathan Adrian and Anthony Ervin headline heat 10 along with Santo Condorelli who was out in a blazing 22.22 last night in the 100m final, and Cameron McEvoy and Vladimir Morozov will look to rebound after disappointing performances in the 100 in heat 9.

We’ll see four heats in the women’s 800 free, headlined by superstar Katie Ledecky in search of her 4th gold and 5th medal of these Games. She’ll swim in heat 4 along with American Leah Smith and Team GB’s Jazz Carlin.

In distance events it’s unusual to have someone qualify for the final in the non-circle seeded heats, but in this case keep an eye out for Spain’s Mireia Belmonte Garcia, who’s riding high after claiming 200 fly gold last night.

Michael Phelps will return to action in the men’s 100 fly, swimming out of heat 6 with Singapore’s Joseph Schooling and China’s Li Zhuhao.

Laszlo Cseh, Chad Le Clos and Tom Shields, three of the top four finishers in this event at last year’s World Championships (along with Schooling), will look to rebound here after disappointing performances in the 200 fly that saw Le Clos (4th) and Cseh (7th) off the podium and Shields unable to make it out of the heats.

Le Clos and Shields will go in heat 5 along with France’s Mehdy Metella, and joining Cseh in heat 4 will be two-time World medalist in this event Konrad Czerniak and Metella’s French teammate Jeremy Stravius.

Four heats of the women’s 200 back will be headlined by Hungary’s Katinka Hosszu, who will be looking for her fourth gold medal of these Games. She swims out of heat 3 alongside three-time medalist here Maya Dirado (who finished behind Hosszu in both individual medley events).

Hosszu was bronze in this event at last year’s Worlds and has been on fire here, but the other two medalists from Kazan haven’t been so lucky.

Both Missy Franklin (heat 2) and Emily Seebohm (heat 4) will look to come back from shaky starts here in Rio. Franklin missed the final of the 200 free and was left off the 4×200 relay in the final for the Americans, while Seebohm shockingly finished 7th in the 100 back after coming in as the clear favorite for gold.

Notably swimming with Franklin this morning is Russia’s Daria Ustinova who was initially banned from competition due to doping allegations, and beside Seebohm in the final heat will be her Australian teammate Belinda Hocking, a two-time World Championship silver medalist in this event.

no way he gets gold. no way