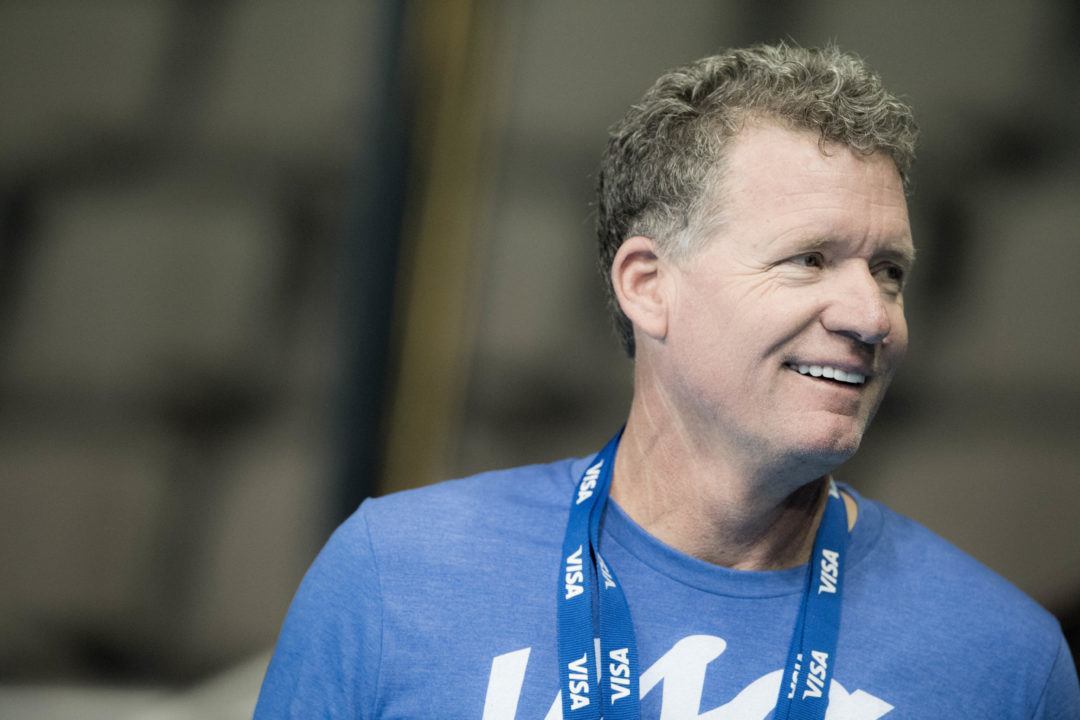 David Marsh is headed to Berkeley to assist Dave Durden with the Cal men until the NCAA Championships. A formal announcement is expected today.  Archive photo via Mike Lewis/Ola Vista Photography

David Marsh is headed to Berkeley to assist head coach Dave Durden with the men’s collegiate team at Cal until the NCAA Championships. A formal announcement with more details about his title and role is expected on Friday.

Marsh returns to collegiate coaching two years after resigning as the head coach of UCSD in 2019. Marsh spent two seasons leading the Tritons, who ended up finishing 10th (men) and 6th (women) at the 2019 NCAA Division II Championships.

Marsh is currently the head coach of Team Elite Aquatics in San Diego, California, and the ‘Professional Adviser’ of the Israel Swimming Association. In addition, he coaches the LA Current during the ISL Season, who most recently finished 4th at the 2021 ISL Finals.

Marsh developed Team Elite through his role with SwimMAC Carolina, a position he held for nearly a decade. As the CEO and Director of Coaching of SwimMAC, he was able to develop a group of elite athletes that generated 14 Olympians for the 2008, 2012 and 2016 Games.

In 2016, Marsh was given the role as 2016 Head U.S. Women’s Olympic Swim Coach. Under the guidance of Marsh, ​Team Elite​ put more athletes on the 2016 United States’ Olympic swim team than any program in the nation. If Team Elite were a country, they would have placed 4th in the medal standings in Rio. Some of the most notable athletes in that group include Ryan Lochte, Katie Meili, Kathleen Baker, and Anthony Ervin.

Marsh is arguably most known for his stint as the head coach of Auburn, where led the Tigers from 1990-2007. In his tenure Auburn amassed a record-setting 12 NCAA Team Titles, 7 on the men’s side and 5 on the women’s side.

Kreitler and his wife are expecting the birth of their child in February, which opens the door for Marsh to come in as an assistant under Durden.

Could you please explain what the abbreviations NCA, JCC and RSD mean?

North Coast Aquatics, Jewish Community Center, and Rancho San Dieguito. The first and third acronyms are clubs, the second is a facility that has a pool that teams train out of in the area.

A bit of a head scratcher… good at getting results, but poor morals.
Dave must be really tired of losing to Eddie.

Oh, come on. Don’t be a passive observer.

2
0
Reply
samulih
Reply to  Time For Barta To Go

Why does Kreitler’s wife having a baby open the door for Marsh? Is he pulling a Pete Buttigeig and taking a 3 month paternity leave?

Obviously he is and it looks like Durden has a pretty good back up plan in place.

Why is taking paternity leave being stigmatized? I (a dude) don’t have kids yet, but when I do, you know I’m taking full advantage of it to: 1) bond with my child and 2) give my wife some time off. Having and caring for children shouldn’t be totally reserved for the mother; dads should play a big role in raising their children.

Yes and also add you never know how hard the pregnancy has been if there have been complications the mom might need more support.

You are a good man. My wife delieved our 4 kids on C-section (3 pregnancies). Carried twins full term (14+ pounds total). She say she loved to be pregnant because she got all credit and I did all work. Unless you are Tesla or De Vinci, nothing you do is important enough to miss a second of your child’s life.

Yet, parenting turned you psycho.

Daddy’s girl here. I love you.

Who is stigmatizing it? I asked a question. I have known Chase personally. He is a great Christian man. I have 4 children. I would tell him that the time very early after delivery is important. But staying off the job for more than a few days is unnecessary. My advice would be to take the time when the kids are toddlers if you want to give your wife a real break. A newborn is always highly attached to its mother. Just the way it is. Bonding won’t happen for the dad for a while. And often in those who belong to a church there are many people willing to help, bringing food etc. Highly likely his wife’s mother will… Read more »

So much cringe in one post. I’d applaud the witty satire except it’s not.

I truly love that people take the time to troll comment on a swimming website. Fascinating to me, honestly.

Oh, it’s the best. Fan of a Cal rival thinking of a way to get a sick burn in on a guy for…taking days off he is owed.

I’m more interested in the Big Brain that makes taking employer-offered days off a bad thing.

I asked a question. Compared it to a recent absurd example. I’m glad you loved my comment.

Just a hunch, ‘Compared it to a recent absurd example’ is where the questions are coming from.

Do you have some kind of problem with paternity leave?

Nope. Where did you get that idea? See my comments above. Do you have a problem with that?

he doesn’t have a problem as long as it’s no longer than “a few days”. So glad my husband has more sense than that! I mean you do you man, but shaming someone for taking more than 3 days away from the pool when his wife has a baby is just… not the direction this post needed to go in. And yes, before you get defensive you ARE shaming him.

Wow! They are smart.

It doesn’t appear that Cal is the only school to have dirty foreigners on their roster.

So is Team Elite joining him? Or is he leaving that?

As far as I can tell, there really isn’t a Team Elite anymore? Sometimes some people training in San Diego, but no big group like there used to be.

Based on their results, he left Team Elite a long time ago.

Didn’t he push Northcoast Aquatics out of that JCC pool for his team? What a shame for that club, all due to one man’s greed.

no, it was way more complicated than that. NCA “was happy” to loose JCC and blame it on TE

NCA was certainly not happy to lose a 25 year relationship with that facility.

No, NCA wasn’t happy to lose the JCC and blame it on TE. I can personally attest to that.

Is there even a Team Elite left to actually leave?

Is there a Team Elite left to leave?

Who all is still left at Team Elite?

Who is training with Team Elite these days? He obviously doesn’t care about them. I feel for his Team Elite assistants

I might be out of the loop but I thought Kathleen Baker was still his star pupil. I didn’t hear if she went somewhere else

Bet she knows how to get to Cal!

San Diego/Imperial LSC parent here. Team Elite combined with Coronado swim last year to form an a team called CSTE. They have several pools in SD County that they train in, including the BBMAC at Coronado Island. I am not knowledgeable enough about their Elite/NCAA/Pro program to comment, but for the last year the majority of the top age group swimmers in our LSC have transferred to their program.

I’d think that Durden was smarter than this. If you give Marsh even an inch, he’ll take a foot. I wouldn’t trust that guy for anything.

Are you kidding- Durden worships Marsh and is his acolyte in every sneaky way.

So, uh, how does this work? Pretty sure you’re only allowed to have 1 volunteer swim coach for a single gender program. Is he just working with post-grads/pros?

What makes the most sense to me is that Marsh is going to work with the post-grads to fill that gap when the college team is off competing at Pac-12s, NCAAs, etc.

But, Marsh’s text to us specifically said “collegiate team.” That could’ve just been imperfect wording, though.

Chase Kreitler and his wife are having a baby in February.

I now have a new guess: Chase will go on parental leave. 🙂

Ah… its Marsh. The king of bringing in Olympians in January to compete at NC’s