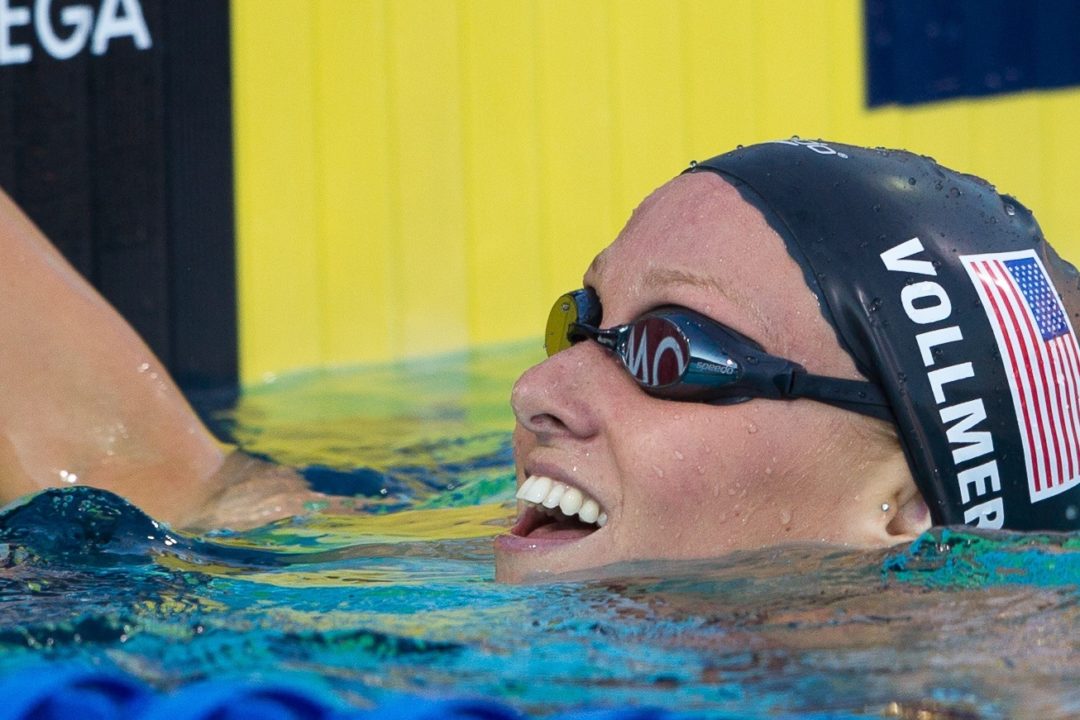 World Record holder Dana Vollmer is one of two swimmers who have been put on the ballot for the 2015 Texas Sports Hall of Fame class. Archive photo via Tim Binning/TheSwimPictures.com

Both Quick and Vollmer have deep roots in Texas.

Vollmer, a native of the Dallas suburb of Granbury, won three gold medals at the 2012 London Olympic Games, to go with one from 2004 (when she was still living and training in Texas). She’s the current World Record holder in the 100 fly, and also has 6 World Championships to her credit (a total of 16 medals). As a teenager, while swimming in finals of the 800 free relay at the 2004 Olympic Games, she was a part of a World Record setting relay with Carly Pipe, Natalie Coughlin, and Kaitlin Sandeno.

Growing up, she swam for the Fort Worth Area Swim Team, and at the 2000 U.S. Olympic Trials was the youngest entered swimmer at 12 years old. A year later, she would be the youngest swimmer at the 2001 Goodwill Games.

Though Vollmer was born in Syracuse, and left for a college career in Florida and California, she spent the time in between living in Texas.

Quick was similarly not born in Texas, but as they say in the Lone Star state, he got there as fast as he could. The Akron, Ohio native divided his childhood between Austin, Dallas, and Wichita, Kansas, and spent much of his adult life in the state as well.

He was a three-time All-American at SMU, and after graduation, in 1965, took over as the head coach of the DAD’s Club in Houston with his wife Ann. This was the first big break of Quick’s coaching career, and he built the DAD’s Club into a national YMCA power: a status that they’d hold for the next 20-plus years. Quick contributed to the pre-Olympic training of Keena Rothhammer, the 1972 Olympic gold medalist in the 800 free, while at DAD’s.

Quick then went on to be named the head coach at SMU, before going on to a wildly successful career as the head coach at Iowa State, Auburn, Texas, Stanford, and back to Auburn. He was on the coaching staff for 6-straight U.S. Olympic Teams from 1984 through 2004, and has won 13 NCAA Division I swimming national championships as head coach, which is more than any coach in history.

The two are part of an incredibly deep list of nominees (which can be seen in full here). Among the most nationally recognizable names on the list include:

Both are also inductees of the Texas Swimming and Diving Hall of Fame already. Quick was several years ago and Vollmer was just inducted this past spring.
Link to the TXSDHOF: http://www.tsdhof.org/

I was so fortunate to have Richard as a mentor. I miss him every single day and I wish I could thank him one more time. BELIEVE IN BELIEF!!!