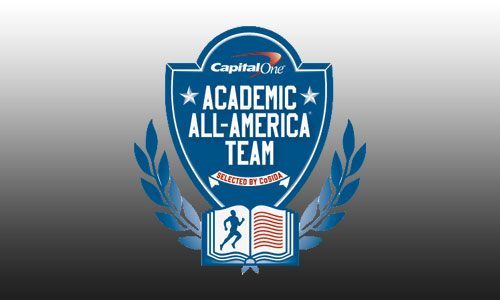 The Capital One All-American Team was released this week as selected by CoSIDA, the College Sports Information Directors of America. CoSIDA...

The Capital One All-American Team was released this week as selected by CoSIDA, the College Sports Information Directors of America. CoSIDA breaks the U.S. and Canada into 8 geographically-based districts to compile the All-District Teams. All athletes honored with first team All-District status go into consideration for the Academic All-America first, second, and third teams.

Each school’s Sports Information Director nominates athletes, who must have a class standing of sophomore or higher, have a cumulative GPA of 3.3  higher and either be a “varsity starter or key reserve.” Capital One sponsors the All-District and All-America teams. These teams are made up of athletes from across the range of different sports. There are All-District and All-American teams for Division II, Division III and the College Division (made up of NAIA, Canadian and two-year schools).

The Capital One Academic At-Large team consists of fencing, golf, gymnastics, ice hockey, lacrosse, rifle, skiing, swimming and diving, tennis, water polo, bowling (women), crew (women) and field hockey (women), volleyball (men), and wrestling  (men). The other sports have their own academic all-american teams, while swimming and diving is lumped into the At-Large category. The college division is made up of NAIA, Canadian and two-year institutions.

Two swimmers led the division III Academic All-American Teams this year. Andrew Chevalier, a senior at Kenyon and Anastasia Bogdanovski, a junior from Johns Hopkins were both selected as the Academic All-America of the Year award winners for the men’s and women’s At-Large teams.

“A chemistry major with a 3.96 G.P.A., Chevalier was a member of Kenyon’s NCAA Division III national championship men’s swimming and diving squad, earning All-America honors 12 times with 11 top-10 national finishes in his career. At the 2014 national championships, the native of Golden, Colorado, recorded three top-10 finishes, finishing fourth in the 400-yard individual medley, sixth in the 500 freestyle and eighth in the 1,650 freestyle. A 2012 Olympic Trials qualifier, he claimed the 2014 North Coast Athletic Conference title in the 400 IM in a conference-record 3:54.18. Chevalier was a 2014 team captain, Kenyon’s Bennett Memorial Award-winner, and an NCAA Postgraduate Scholarship recipient.”

“One of seven first-time selections on this year’s Capital One Academic All-America® Division III Women’s At-Large First Team, Bogdanovski garners her first-ever accolade. A public health major with a 3.67 G.P.A., Bogdanovski is the 2014 NCAA Swimmer of the Year after winning six of her seven career NCAA championships. A native of Fanwood, New Jersey, Bogdanovski is the 2014 Division III Woman of the Year nominee for swimming & diving for the Collegiate Women Sports Award (CWSA) and the Bluegrass Mountain Conference Swimmer of the Year. Bogdanovski also swims on the Macedonia national team and holds four national records (50 freestyle, 100 freestyle, 50 backstroke, 100 backstroke).”

This is the second consecutive year a Kenyon swimmer has won the Academic All-American of the Year award. Curtis Ramsey won the award in 2013.

Of the nominee’s to the men’s first team, Carlos Maciel is the only athlete to be named to the Academic All-American team three different times. Maciel is a senior swimmer at Dennison.

Of the honorees, 29 swimmers were honored to their respective teams, representing a third of all the athletes honored.