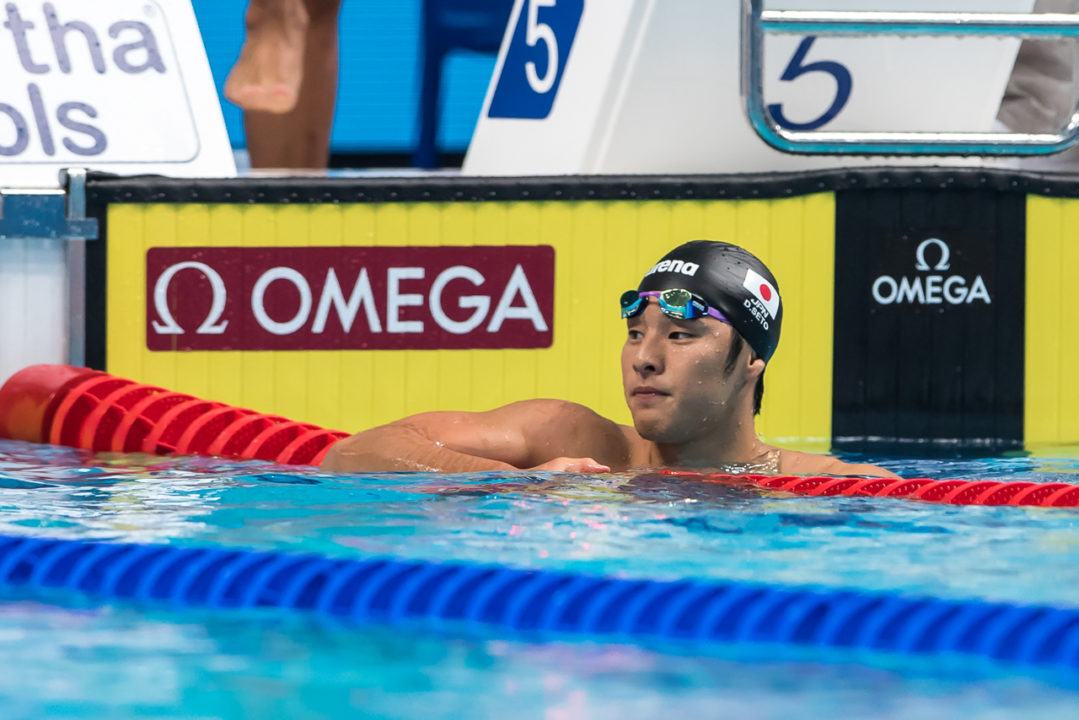 The final cluster of the 2017 FINA World Cup Series is upon us, with the first stop taking place in Beijing at the ‘Water Cube’, the famous aquatic center where American Michael Phelps accomplished his historic 8-for-8 Olympic gold medals triumph. Tonight, the key players evident in earlier stops of the World Cup splashed into the pool, while the host nation provided some deep talent sprinkled among the men’s and women’s finals.

Hungarian Katinka Hosszu did her best to try to catch the overall series leader Sarah Sjostrom of Sweden by collecting 2 golds on day 1. The Olympic champion first took the women’s 100m backstroke race in a time of 56.34 to hold off a charging Aussie in Emily Seebohm, who finished in 56.55 for silver. Both women represented the only racers of the field to notch marks under the 57-second threshold.

Hosszu then took the women’s 100m IM in a heated battle against Sjostrom, one that we’ve seen several times across this year’s World Cup. The ‘Iron Lady’ nabbed the win tonight in a mark of 57.50 against Sjostrom’s 57.78, with both times within range of what they’ve been hitting all series long. Although Hosszu has clinched a smooth 4-for-4 100 IM record thus far in the World Cup, Sjostorm has been right behind in every race, having been as close as within .08 in Moscow. Below is a comparison of the 2 women in the 100m IM thus far:

South African world champion Chad Le Clos was successful in the men’s 200m freestyle race, the event in which he surprised a stacked field and earned silver at the 2016 Olympic Games. Tonight, Le Clos clocked a speedy 1:41.81 to represent the only swimmer to delve into the sub-1:42 second territory. Next to him was runner-up Chinese swimmer Ji Xinjie who secured silver in a solid 1:43.68.

Surprisingly, Aussie Cameron McEvoy, the fastest LCM 100 freestyler ever in a textile suit, was well out of the race in 8th place overall. After producing the 2nd-seeded effort of 1:45.32 in the morning prelims, McEvoy went over a half a second slower in the evening with his last-place 1:46.01.

Le Clos topped the podium in the men’s 100m butterfly as well, as the short course world record holder in the event earned a mark of 49.18 to take gold. Belarusian athlete Yauhen Tsurkin finished next, exactly 2 seconds behind in 51.18. Of note, American Tom Shields citing illness. finished out of the top 3. He has dropped the 200m backstroke, but is still in the line-up for the 50m butterfly tomorrow.

Japan’s Olympic bronze medalist Daiya Seto provided the most electrifying swim of the night, taking the men’s 400m IM in a new World Cup record. Seto led wire-to-wire to produce a final time of 3:58.20 for gold. That overtook the previous World Cup record held by Aussie Thomas Fraser-Holmes with the 3:58.69 he produced back in 2014.

Looking at Seto’s splits, the newly-married 23-year-old Waseda graduate registered 53.75/1:00/1:06.85/57.60 to lead from start to finish and beat out the next-closest competitor, David Verraszto of Hungary, by almost 6 seconds.

We recently reviewed how Seto has become more competitive in his breaststroke, making his IM in both short and long course that much more dangerous. When he won the 2016 Short Course World Championships 400m IM title, Seto split 54.30/1:00.47/1:06.90/57.57. The fact that he is still producing world title-caliber splits in breaststroke coming after a hard training stint in Australia bodes well for the swimmer’s ongoing challenge to rivals Kosuke Hagino and American Chase Kalisz in the long course event.

What happened to McEvoy

I’m not sold on the seto improving his breast narrative. In this he improved his fly and back splits a lot more and his free close to the same. I don’t know the history of his 200 breast times, but as far as I know it’s never been any sort of weakness for him like it was for phelps or lochte

i agree, i remember him swimming a 2.05 in the 200 breast at a world cup many years ago. probably something like 2012/13.. cant be bothered to look it up tho.
and i dont think his breast improved much since then (neither became slower).

Wow that 200 by Le Clos would have won a medal in every sc world championships ever beats last years bronze. Makes me sad he doesn’t race yards. Bet you he could get the 100 and 200 fly records and maybe 200 free

Idk man Le Clos is unnoficially one of the fastest 100 yard flyers ever in his first time swimming in yards. Train him a year in yards he would demolish

He did a yards meet once while he was in the States, just for kicks. If I remember correctly, I think he dropped like a 44.2 100 fly on a whim.

He didn’t “do it for kicks”. It was in preparation for Short Course Worlds. He did the 44.2 less than a week before he did his 48.08. He was fully tapered. I’d be willing to bet Schooling and Dressel would be able 47 low in scm

How on earth would he get the 100 fly record? You act like he doesn’t swim short course…he swims at all the WC stops. He probably swims more short course than anyone in the world. Sure it’s not yards but it’s not really that different. Caeleb is 6 tenths faster than Le Clos in long course and is a better short course swimmer than long course.

Le Clos swam a 44.2 in his first time doing it. First time no yards training

How much difference is there between scm and scy really?

Thought Michael Andrew and his 4:13 in the 400m IM was pretty impressive as well! Shows he is working on his endurance and it’s paying off

13
0
Reply
JP input is too short
Reply to  Crannman

His free splits don’t reflect that 😛 But yes, overall it was a pretty good swim.

This must be sarcasm.

I thought C1 was a little disappointing after her record performances last week. That 50 free was all about Sarah and Ranomi from start to finish despite the “pedestrian” time. Blume also in the field, is clearly not a short course swimmer. Will probably be a tough fight for 100 free though.

good times by le clos, especially in the 200 free

the japanese goggles are super awesome, and daiya is speedy