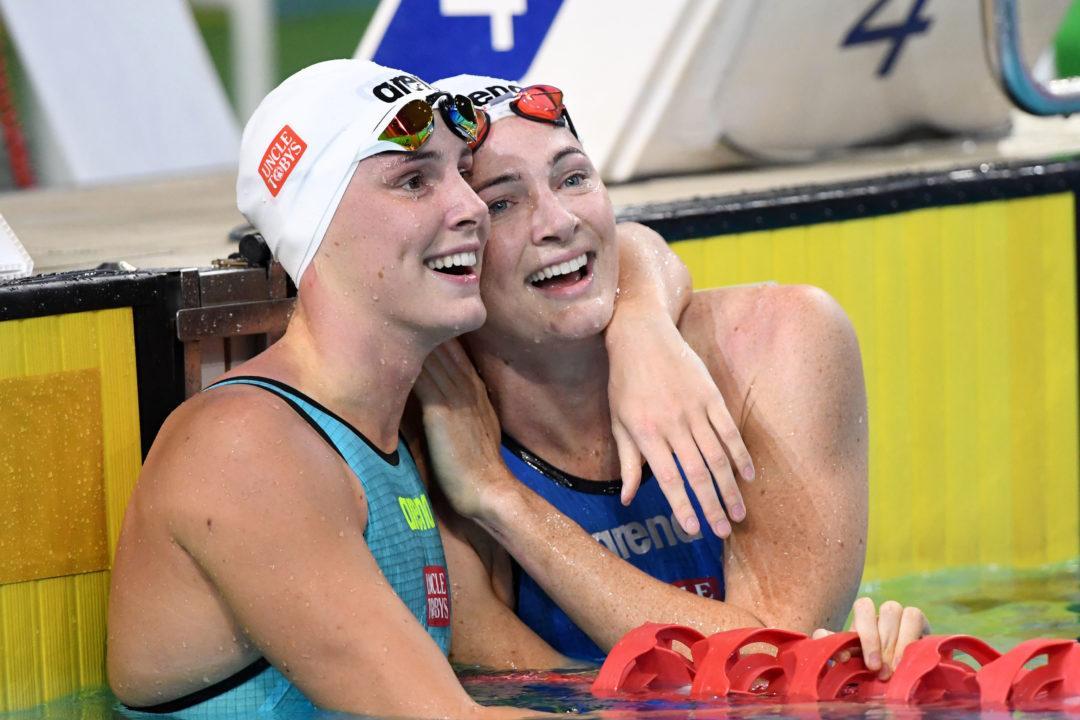 The Campbell sisters will look for a pair of 1-2 finishes in the sprint free events at the Commonwealth Games. Archive photo via Delly Carr / Swimming Australia Ltd

The women’s sprint events on the Gold Coast will be highlighted by the sister duo of Cate & Bronte Campbell, who have combined for six Olympic and 15 LC World Championship medals over the course of their careers. While they headline the 50 and 100 for the Aussies, Emma McKeon and Ariarne Titmus will take over the mantle in the 200, while Canadians Penny Oleksiak and Taylor Ruck will also be major factors in both the 100 and 200. Take a closer look at the three shorter freestyle events below:

After taking 2nd and 3rd four years ago, the Campbell sisters will be looking for a 1-2 finish in the 50 free this year like they managed to do in the 100 in Glasgow. There is a clear division in this event, and the Aussies look primed for a podium sweep.

In the last year only three swimmers in the field have gone sub-25, with Cate sub-24 in 23.79. Cate, Bronte (24.22) and Shayna Jack (24.62) all went these times at the Australian Trials in March, faster than they were at any point in 2017, making a 1-2-3 look extremely likely. Both the swims by Cate and Jack were lifetime bests, and Bronte was only a tenth off her best done when she won the 2015 world title.

Behind them there are a ton of swimmers in the 25-second range. England’s Anna Hopkin comes in with a 25.07 from the 2017 British Championships, with South Africa’s Erin Gallagher (25.35) and Scotland’s Lucy Hope (25.42) right there in the mix as well. The three Canadians in this event, Penny Oleksiak, Rebecca Smith and Kayla Sanchez, have a good chance to all make the final as well, though none of them specializes in the splash and dash. The 50m semis come in the same session as the 100 fly final, so there’s a chance Oleksiak and/or Smith could opt out with the 50 coming first and both more competitive in the fly (though there’s lots of time between the two).

While the 50 looks to be clear sailing for the Australians, the 100 free will be much more competitive. Along with Cate (52.37) and Bronte (52.85), Canadians Oleksiak (52.94) and Taylor Ruck (52.96) have been sub-53 in the past 12 months. Ruck in particular has been red hot of late, including defeating world record holder Sarah Sjostrom head-to-head at the Atlanta Pro Swim. Oleksiak was the one who came through to win Olympic gold (tying Simone Manuel) in this event in Rio, while Cate, the favorite, faltered and finished 6th.

There’s no question Cate is the fastest swimmer in the field. She’s the second fastest performer in history, holds 9 of the top-16 times ever swum, and has gone sub-53 over 20 times. The question is whether or not she can handle her nerves in front of the home crowd and hold off the young Canadians down the stretch.

Freya Anderson of England is one to keep an eye on in this race, as the 2017 World Junior champion was 53.88 in August at just 16 years of age. Now 17, she’ll look to shock the big names and grab a medal. Winning bronze at those junior championships was Kayla Sanchez, the third Canadian entrant, who figures into the final picture with a best of 54.44. England’s Hopkin, South Africa’s Gallagher and Scotland’s Hope will also be in the mix for a finals berth.

After the third Australian Emma McKeon dropped this event, Shayna Jack was given the slot despite finishing 5th at their Trials (Brianna Throssell was 4th, but like McKeon, has the 200 fly in close proximity to this race). With Jack in, she should be right there in the mix. She was a career-best 53.40 at the 2017 Aussie Trials, and should battle Anderson for 5th after going 54.20 at the beginning of March.

Defending champion Emma McKeon comes in as the big favorite in the 200 free, coming off a silver medal performance at the 2017 World Championships where she tied with American superstar Katie Ledecky. Her recent venture out into the world of the 200 fly can only help her in this event, and with this coming on the first day of competition, her heavy schedule won’t weigh her down at all.

Rising 17-year-old star Ariarne Titmus actually beat out McKeon at the Trials in 1:55.76, a lifetime best. After gaining some big meet experience last summer at Worlds, including taking 4th in the 400 free, she’s setting up for a big performance on the Gold Coast.

While McKeon and Titmus have to be favored to go 1-2, the 200 does feature Canadian studs Ruck and Oleksiak. Ruck broke the Canadian Record in this event at the Atlanta Pro Swim in 1:56.85, and looks like she has at least a 1:55 in her, if not better. This is the first time Oleksiak has pursued this event individually on an international level in her young career, but she did split 1:54.9 in Rio on the relay.

England’s Eleanor Faulkner exploded for a best of 1:56.76 at the Swim England Winter Champs at the end of December, putting her in place to be a factor in the final, and the third Australian, Leah Neale was within six tenths of her PB (1:57.06) at Australian Trials.

Freya Anderson and Holly Hibbott of England, Jazmin Carlin and Kathryn Greenslade of Wales, and Joanna Evans of the Bahamas will be pushing for a spot in the final as well with swims over the last year ranging from 1:58-2:00.

With Canada’s third entrant Katerine Savard withdrawing, they could have either Rebecca Smith, Kayla Sanchez or Mary-Sophie Harvey step in and any of the three would have a good shot to make top-8.

Don’t worry ;-). This is why we have comment filters in place.

Cate takes the 50 and 100 only because this meet doesn’t matter too much.

Someone needs to tell her the Olympics/Worlds don’t matter either. Then maybe she’d win

I suppose you’ve won many worlds and Olympic gold medals? After all, you said it that the cg doesn’t matter.

Yes because it’s not like you are allowed to criticize people for things if you hadn’t done it before.

This is the absolute laziest argument there is

The Australians tend to take the Commonwealth Games very seriously, and it’s also at home. No matter the size of the competition, competing at home always gives you that extra motivation.

The NCAA’s were great, however I think this meet matters quite a bit with respect to measuring the progress that the young Canadians have made as we move towards Pan Pac’s this summer…along with a few young Aussie’s. The women’s field at this meet is very fast in a number of events and I’m very interested when youth emerges as consistent world class. We may see some of these moments at this meet.