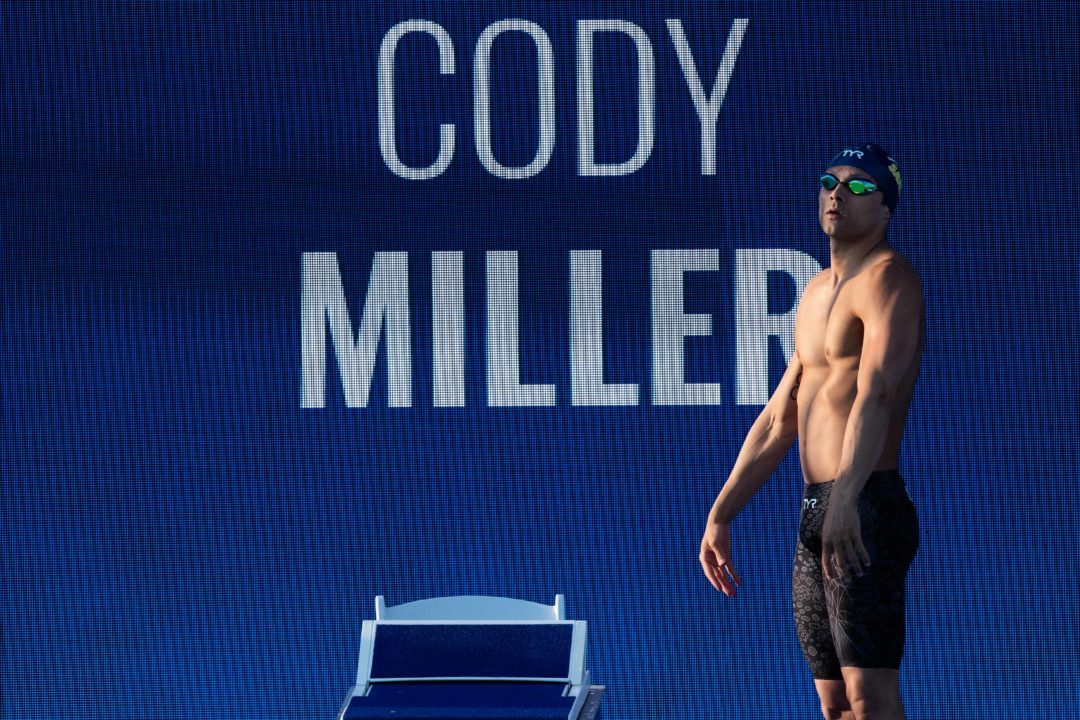 His previous in-season best was 59.51 from a 2015 Pro Series meet in Santa Clara. Stock photo via Mike Lewis/Ola Vista Photography

After a battling a knee injury last Summer and Fall, Cody Miller is back to posting career top times. At the Bloomington stop of the Pro Swim Series tonight, Miller tore to a 59.24 100 breast, winning the event over Michael Andrew (59.52). Miller’s time was a new in-season best. His previous in-season best was 59.51 from a 2015 Pro Series meet in Santa Clara. Miller’s lifetime best is 58.87, which he swam for Bronze at the 2016 Rio Olympics.

Here is a comparison between Miller’s in-season best time from tonight versus his lifetime best from Rio:

The only real difference between tonight’s swim and his Olympic final swim is that he was out just a bit faster in Rio than he was tonight. His time currently sits at 6th in the world this year, while World Record-holder Adam Peaty is the Current #1 with a 57.87.

In the wake of his knee injury last Summer, Miller did not qualify to the World Champs team for this year. However, his time from tonight would have won U.S. Nationals last Summer. Since he won’t be competing at World Champs this Summer, his peak meet will be the Pan American Games, where he is scheduled to swim the 100 breast.

Dolphin kick issue- I’ve spoken to some very high ranking officials about this— many have officiated at trials.

They say the following: one dolphin kick is an up and down motion. Most swimmers only complete half the cycle (just the downward portion) on their pull outs. So when a swimmer does it correctly (many elite swimmers bring the legs up, slam down and bring them to the original position in one motion), it looks like multiple kicks.

Another point of emphasis is that when these big swimmers (yes I get get cost is smaller, but he generates an insane amount of force) finish their pull down, the water moved causes an undulating motion in their feet. This does not warrant… Read more »

Very Happy for him – i love his vlogs & his determination to shine again & the hard work always pays off after an injury .

Really not sure why more people don’t root for this guy. Works hard, has passion for the sport, shares his down moments, and competes. I get the dolphin kick argument, but hey, he’s been DQ’d a few times before at national and international meets, so you know the judges watch him closely. I guess if you’re balding you could take issue with his hair.

Then why did I see him take 2 dolphin kicks in his 100 breaststroke?

He does work hard and has a great attitude

“In the wake of his knee injury last Summer, Miller did not qualify to any international teams for this year…Since he won’t be competing at World Champs this Summer, his peak meet will be the Pan American Games, where he is scheduled to swim the 100 breast.”
Isn’t Pan-Am’s an international meet, so therefore, he made an international team?

28
-55
Reply
You're beat
Reply to  Definitely Not Cody Miller

I trust the officials more than an angry commenter on swimswam.

have you tried watching video of any of Cody’s swims?

27
-8
Reply
Definitely Not Cody Miller
Reply to  You're beat

So did Brendan Hansen.

6
-11
Reply
The Truth
Reply to  Definitely Not Cody Miller

3
0
Reply
Definitely Not Cody Miller
Reply to  You're beat

That’s seriously naive. When have officials ever cracked down on the extra dolphin kicks on a big market swimmer in the international scene?

He does one kick which is legal…? I don’t see “dolphin kicks”

Rested swims now count as “in-season?” We read countless times how certain Indiana swimmers were resting for this meet.

Nothing against Miller, but the title is a bit much considering he rested and suited up for this meet.

I agree with you on the in-season part, but suited up? He’d suit up even if he wasn’t rested unless his name was Dressel.

If you watched the post race interview, at least his chest was shaved. This must have been a confidence builder meet of some sort for him.

First off athletes at his level suit up for every meet. That isn’t something to cite. Second of all whether he was rested or not the atmosphere most definitely played a major roll, as this was some little pro series meet rather than the Olympic Games. Finally, he may have been rested but the odds of him being fully tapered like he would be for an international meet are slim. This was an incredible performance from him and he deserves all the credit he gets.

Cody said in his vlog he was tapering for this meet

Yeah, but it sounds like it was about 10 days. He was doing pully sprints with 100 lbs a week out. I’d say it sounds like a college conference meet taper for NCAA finalist types. He probably can get back to 58 very high later this summer.

He said on his YouTube video he and several other swimmers were tapering.