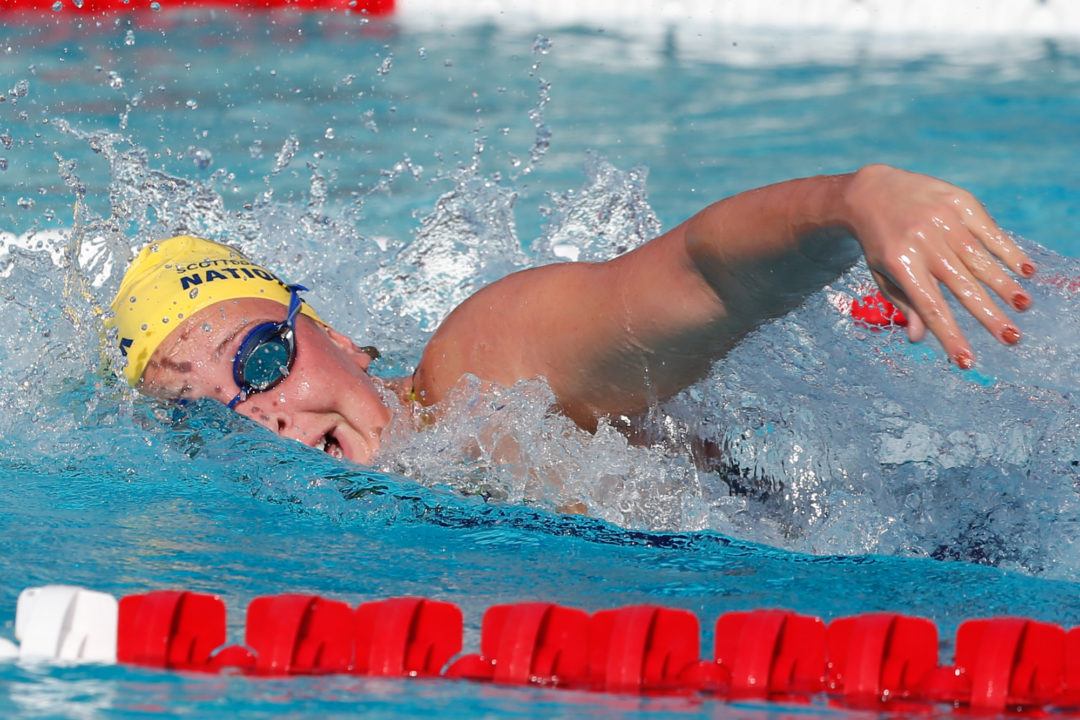 Ashley Strouse won Girl's Athlete of the Year as Chaparral swept both the boy's and girl's sides of the meet at the Arizona D1 State Championship. Archive photo via Tim Binning/TheSwimPictures.com

Despite the need to alter the meets formatting as a precaution due to COVID, Arizona high schools held their Division I State Championship meet on Friday, November 6th. The meet was divided up into “shifts” of three to four events, with breaks in between to allow athletes to warmup or cooldown. The boys competed in the morning while the girl’s meet didn’t take place until the afternoon.

Bahti was recognized as the boy’s Athlete of the Year for his performance.

Joining Bahti in winning multiple events at the boy’s meet was Rick Popper of Boulder Creek High School. Popper was dominant in the sprint freestyle events, sweeping the 50 and 100 free. He took the top spot in the 50 free with a time of 21.15, while he won the 100 free in 46.66. Both of these swims were just off of his lifetime bests. He also added a 21.26 leadoff leg on Boulder Creek’s 200 free relay that took 2nd and anchored their 4th place 400 free relay in 46.79.

The competition for the boy’s meet championship came down to a battle between two schools, Chaparral High School and Desert Vista High School. Despite not winning a single event throughout the meet, Chaparral was able to pull out the win by a score of 302 to 285.

At the women’s meet, Chaparral’s Ashley Strouse was dominant, winning all four of the events she participated in. After anchoring her school’s winning 200 medley relay in 23.37, she won the 200 free by just under four full seconds (1:47.15). Her win in the 200 free was only part of an impressive showing from Chaparral in the event, as members of the team took the top four places. She later added a 4:46.20 in the 500 free to win the event by over 13 seconds and led off her schools 400 free relay in 50.70. Strouse, who has Olympic Trials cuts in the 200 and 400-meter freestyles, is committed to swim at Northwestern University next fall.

She was honored as the Women’s Swimmer of the meet for her performances.

Chaparral won the women’s meet by a large margin, beating out Xavier by almost 200 points to finish with 452.5 points.

While the meet was filled with fast swimming, it was lacking one of Arizona’s most historic men’s swimming programs. Brophy Prep, which had won the previous 32 editions of the boy’s Division I State Championships, was forced to pull out of the meet just days ago following a positive test for COVID on the team. Last year they won the meet by almost 200 points over this year’s champions Chaparral. Brophy Prep was ranked first in 5 different events on the psych sheet prior to their withdrawal from the meet.

Bob Chen is a fine coach, but his Chandler girls placed 18th, which does not commonly produce a COY award. It is noteworthy, though, that he, and others participating in that program, persevered through the transition from long time head of the Chandler HS program, Kerry Crosswhite, who passed from COVID in July, to Mr. Chen. Bob must have demonstrated skills on a different plane to be so recognized by his peers. The Chandler Schools renamed their facility for Crosswhite, which will certainly encourage a certain perspective in the participants in future events there. I suspect the participation during the season of Kerry’s wife Laurie, as an assistant coach, was a motivator in the selection as well. Class all around.… Read more »

As the person who oversees all of it (AZ HS swim), it was wonderful to see Bob’s peers make this gesture.

What a meet, just wish Brophy was able to swim as well. Clearly they were the better team.

I’m so glad Chap was able to pull it off, but it is pretty obvious Brophy would’ve beat us….