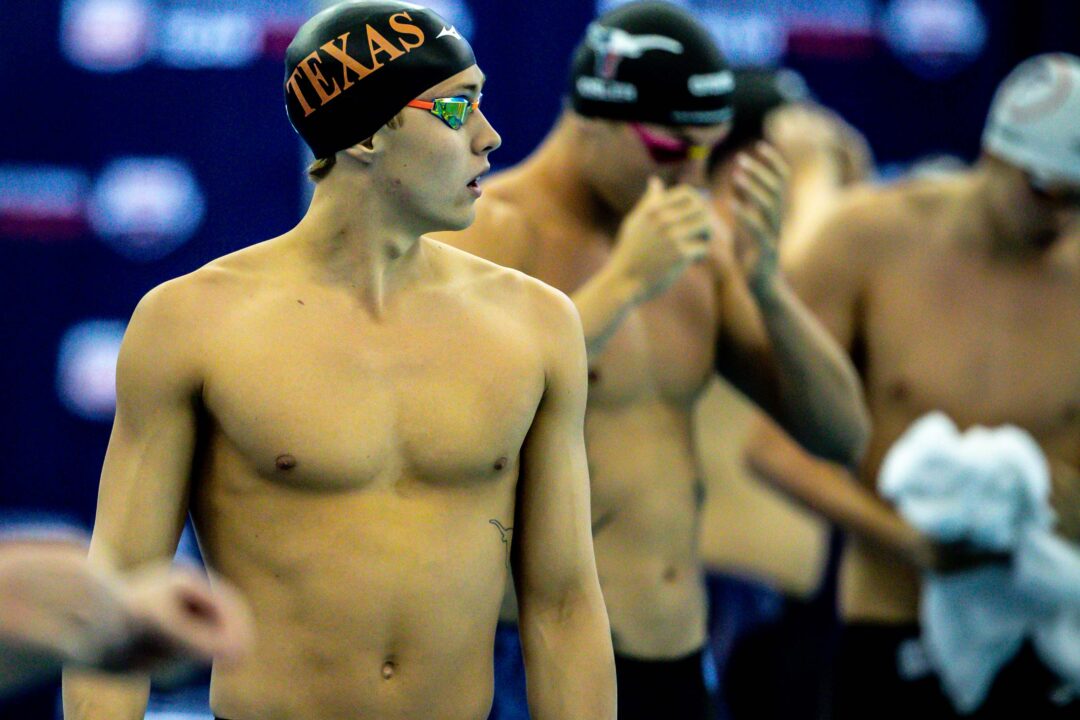 At a "Fast Friday" practice this afternoon, Carson Foster unofficially clocked a 4:09.43 500 free, which would make him the fastest in the country this year. Current photo via Jack Spitser/Spitser Photography

Texas junior Carson Foster appears to have dropped a 4:09.43 at a “Fast Friday” practice this afternoon in Austin.

It is hard to be sure who the other swims belong to, but Sockwell reports in the comments that Shaine Casas is the 4:19.10 and David Johnston is believed to be the 4:13.32.

Foster’s swim marks a massive personal best. According to the SWIMS database, his official best time is 4:20.21, which he swam in 2018 at the Ohio High School State meet. The last time he officially swam the event was in a dual meet last year against Incarnate Word. He got disqualified for a false start, but touched the wall at 4:23.59.

The time is also unofficially the fastest in the country so far this year, even with a majority of midseason invites nearing their end this weekend. Jake Magahey is the only other sub 4:10.0 500 freestyler this season, as he clocked a 4:09.83 at the UGA Invite yesterday.

Johnston’s swim is an unofficial season best time, improving on the 4:14.54 he swam at the Texas vs. Virginia dual meet. His best time of 4:10.96 was set at NCAAs this past March.

Texas does not have their midseason invite until November 30th, when they head north for the Minnesota Invite. It is unlikely that Foster will swim the 500 there, but as a distance free specialist, Johnston will likely be entered in it.

To be the best you have to beat Marchand Carson is not gonna avoid racing him in March. Right now Carson has an advantage in back and Marchand in breast. 200fr last March I think Marchand broke 1:30 in relay so Carson need to go faster than that. We will see

Eddie will have Carson swim whichever events maximize points for Texas. That said, 500 free might be a better option, Texas is very deep in both the 200IM and 500Free.

We will see what kind of drops Enyeart gets at the invite in two weeks, but very possible Texas goes 3up 2 down in the 500 if Carson swims it, or even 3/3 or 4/2. Even if you concede the race to Magahey, which I wouldn’t, Texas could go easily 2/3/7 with Hobson, Foster and Johnston. Then Enyeart, Carrozza and Zettle would get at least two down.

The 200 IM is not a great event for Carson, too many other long sprinters get in that race and muddle… Read more »

I was there and filmed the last half of it. https://youtu.be/NxsYaTCMMUQ

When they do a fast Friday I’m assuming it’s no morning practice and maybe a shorter distance day on Thursday? Otherwise, LoL

If the schedule wasn’t a factor, would Carson be capable of making the US Olympic team in more individual events than any swimmer since Phelps?

I think so yea

Does Lochte count as “since Phelps”?

Doubt he described it as monotonous

Imagine going a 4:09 in an event that arguably isn’t even in your top 5 best events for yards…

In SCY his top 6 based upon NCAA finish might be as follows. After looking at this, especially if Hugo returns, it might be wise to swim the 500 on night 1, as long as he isn’t destroyed for the rest of the meet from doing 2x500s.

if carson is going to be handling longhorn relay duties in a lasco-esque fashion this year, I doubt he swims the 500 on day 1, especially considering Texas may put 4 up anyways without him (Hobson, Johnston, Enyeart, are safe bets potentially even Carozza, Larson, or Zettle). Not to mention Cal is weak in the 500.

Despite his potential to challenge the clear favorite Magahey, it would be best to keep him as fresh as possible since he will likely be swimming 4 relays. 2 500s in a day is extremely taxing, I don’t care who you are. Look at what happened to Townley’s 200 free at 2019 NCs

Maybe it will be now.

Probably a 22 yard pool like the orange and white meet.

So many questions. Eager for invite.

Kyle Sockwell is such a cool dude, great at Texas Gold. A 4:09!!!! Foster can do everything, those 2024 Paris IM races aren’t set in stone yet, what an engine on him. MP always said the 500 free was his fitness test and he never went that fast.