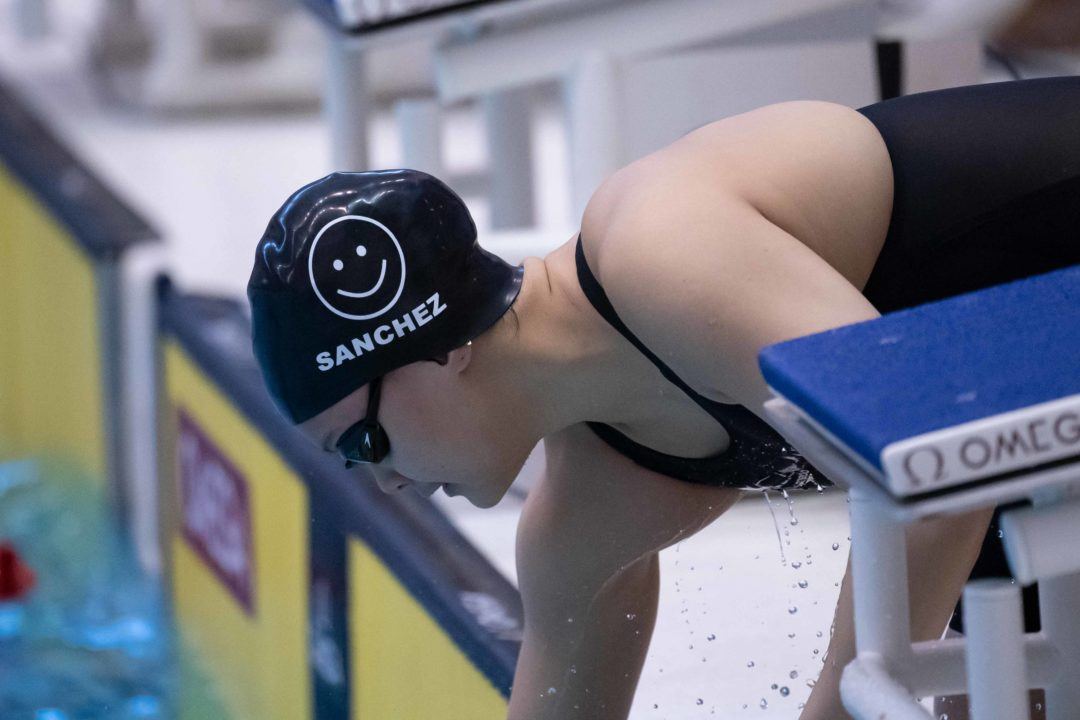 After qualifying for Tokyo in the 100 butterfly, Josh Liendo has now matched the 22.01 FINA A cut during the 50 freestyle prelims. Archive photo via Mike Lewis/Ola Vista Photography

During the 2nd day 3 prelims session at the 2021 Canadian Olympic Swimming Trials, Kayla Sanchez opened things up with a 25.13 in the women’s 50 freestyle to earn top seed heading into finals.

Sanchez will need to quicker tonight in order to secure her spot on the Olympic squad as the FINA A cut sits at a 24.77 which is 0.46 seconds under what she swam in the heats. Having hit a 24.81 PB in May, Sanchez will only need to shave 0.04 seconds off her fastest-ever swim in order to qualify.

This was Sanchez’s third event of the meet and will be her second final, having placed 6th in the 200 freestyle on day 2. Sanchez also raced the 100 backstroke prelims on day 1 of the meet where she placed second in the morning with a 59.78 to Kylie Masse’s 59.78. Sanchez scratched from the final, leaving Taylor Ruck to claim a spot on the Olympic team in the event with a 59.60 to join Masse who set a new Canadian record of 57.70.

This will be Sanchez’s second-last shot at qualification for the Olympics with her final event taking place in the form of the 100 freestyle. There, she is ranked 3rd behind pre-qualified Taylor Ruck and 2016 Olympic champion Penny Oleksiak.

Canadian record holder Taylor Ruck notably scratched the 50 freestyle today, foregoing a chance at adding this event to her lineup. She broke the Canadian record with a 24.26 back in 2018.

Liendo, who qualified for Tokyo on day 1 in the 100 butterfly, exactly matched the FINA A standard of 22.01 to take the lead heading into finals. That’s a solid PB for Liendo who went into the meet with a 22.29 from just last month.

Hayden and Liendo have now both hit the FINA A standard within the Tokyo qualification period as Hayden hit a 21.97 back in March 2020. Hayden was a 22.09 during the prelims.

While Liendo and Hayden will be the top 2 seeds in the final, Yuri Kisil will be fighting for a spot in the top 2 as well, having hit a 22.34 during the prelims. Kisil holds a PB of 22.23 in the event meaning that he will need to hit a new best time during the finals in order to qualify for the team.