Can Anyone Outscore The Texas Men In Their Quadrathlon Competition? 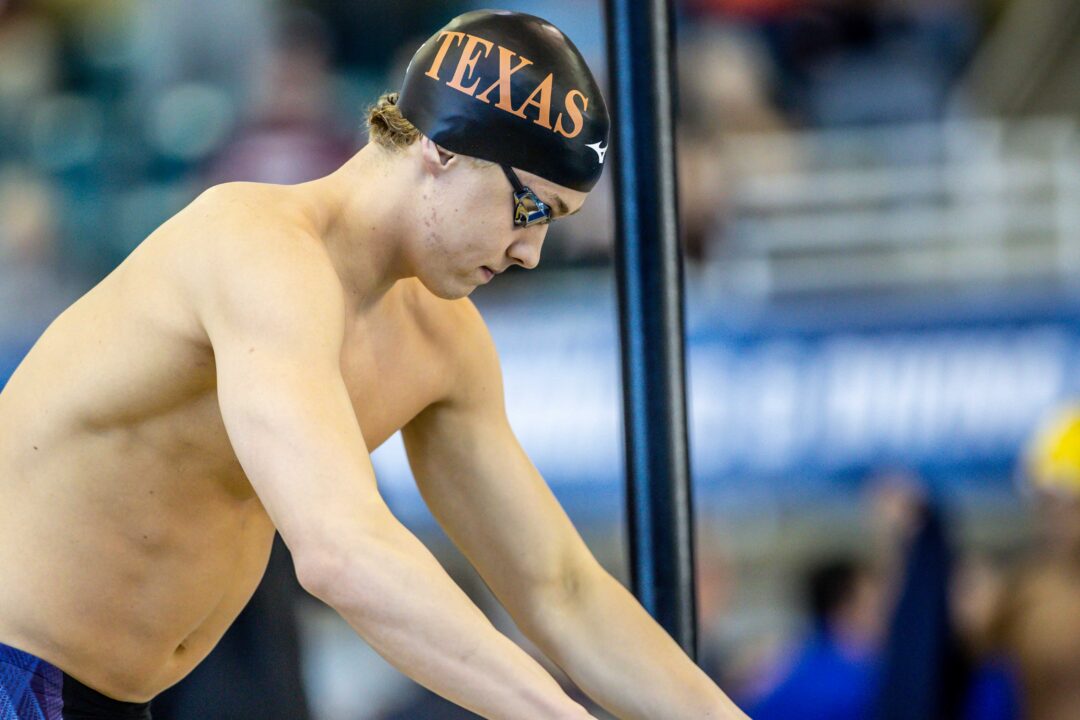 In this article, we scored out the results from the Quadrathlons held by Indiana and Virginia, and compare them to those of the Texas men. Archive photo via Jack Spitser/Spitser Photography

The Texas men held their annual Quadrathlon competition on Friday, where the team’s top swimmers competed in a 4×50 on 8:00 with each 50 being a different stroke, and scored points in each event. Texas pro swimmer Shaine Casas won the Quadrathlon with 5,166 points, becoming the first person in the meet’s history to score over 5,000 points.

Upon receiving the results from the Texas Quadrathlon, we asked ourselves: How many points could swimmers from other teams score in a Quadrathlon, and are any of them capable of beating out Casas’ point total? Luckily for us, we do have Quadrathlon results from other teams, as Indiana did one in September 2021 and Virginia did one in March 2022, right before NCAAs. However, neither team scored their results the way Texas did. So in this article, we decided to score out the times from the IU and UVA Quadrathlons using the Texas scoring system, and compare them to the scores of the Texas men.

We acknowledge that IU and UVA may have done their 50s on a different interval compared to Texas, so their times may not be 100% reflective of their true capabilities in a Texas-style Quadrathlon.

Before we get started with the comparisons, here’s a quick refresher on the Texas scoring system:

In addition, Brendan Burns, Luke Barr, and Rafael Miroslaw were all less than 50 points away from hitting 4,600.

Points-wise, Virginia performed better than Indiana in this hypothetical competition. This is not a surprise, considering that the Cavalier men are extremely sprint-heavy. Matt Brownstead had a very impressive showing, scoring 4,909 points to get over the elusive 4,900-point barrier. His 19.49 50 free time was the third-fastest amongst the UT, IU, and UVA swimmers, with only Matt King‘s 19.34 and Casas’ 19.3 being quicker.

Josh Fong, Jack Aikins, Matt King, and Justin Grender were all able to score over 4,600 points as well.

After scoring both the Indiana and Virginia men, we decided to compile the Quadrathlon results from all three teams and make a top ten leaderboard. And while Texas still dominates, holding six of the top ten spots, Virginia and Indiana both got two of their swimmers into the top ten as well. That being said, we only know of three different schools who have done a Quadrathlon and shared their results to us. Hopefully this article will spark a chain reaction (just like the 75 with fins race videos), and we’ll get more schools participating in this challenge using the Texas-style scoring format. Maybe after that, we’ll get a variety of different schools in the top ten, and potentially someone challenging Shaine Casas‘ 5,166 point total.

What About The Women?

Of course, we couldn’t end this article without highlighting what the Virginia women could have done in this Quadrathlon. And while the Texas scoring format was designed for male swimmers, elite female swimmers of today’s era are certainly capable of beating out the 1,000-point times set by Eddie Reese. The Texas women didn’t participate in this, but when looking at the results from the Indiana and Virginia women in their respective competitions, we discovered that Virginia’s Kate Douglass was the only female swimmer to not earn negative points in any 50 stroke event. In fact, she accumulated 4,201 total points, a feat that she accomplished in the midst of tapering for 2022 NCAAs—where she went on to break three American records in three strokes.

Considering that Douglass is the fastest woman ever in the 50 fly (relay split) and 50 free (flat start), is also an American record holder in a breaststroke event, and has the fastest recorded time in the women’s 100 IM, it’s reasonable to assume that she would probably be the highest female scorer in the history of this Texas-style Quadrathlon. That being said, anything can happen, and if there’s a woman out there who thinks they can beat Douglass’ point total, feel free to try (For example, Maggie MacNeil would probably be a strong candidate to do so).

yeah idk i don’t see much competition. His freestyle and fly are untouchable and his breaststroke would prob be one of the fastest too. Idk how fast his back is but it can’t possibly be bad enough to be overtaken by someone else

Yes, I feel he could probably be under 20 in Fly and 19 in Free. Maybe even under 24 on Breast. Then, any Back time would be fine.

The new 75 with fins meme

I’m curious to see what Luca Urlando could do

Luca can have the 8th lane when we get Casas, MA, Marchand, Dressel, Chlorine Daddy, Duncan, and Chalmers to do this.

isn’t this challenge just 50? Pop, Chalmers, Scott, Marchand maybe wouldn’t be very good at this as they aren’t truly elite in any 50m. I think Andrew would win and in their primes Morozov and Manadou would also be absolutely amazing

I don’t think Andrew beats Dressel, not in SCY. In this hypothetical scenario Dressel annihilates the field in fly and free, and could win the breast…don’t forget he was the American/NCAA/US Open record holder in the 100 breast. The only “weakness” he has is back and I doubt Andrew or anyone else would make up enough ground to overtake him.

LCM is a different story and I could see Andrew taking that.

Yeah among Americans, I think Dressel is the obvious favorite here. MA would be very, very good in this format, but I don’t think he beats Caeleb.

oh for some reason i assumed this was lcm. For SCM or SCY Dressel would definitely beat andrew. He would beat him in Free and Fly and could beat him in Breast. Also with back dressel could just stay underwater for 30m and then just absolutely swing his arms when he’s on the surface

This meet format seems made for swimmers like Michael Andrew

One too many fifties for MA.