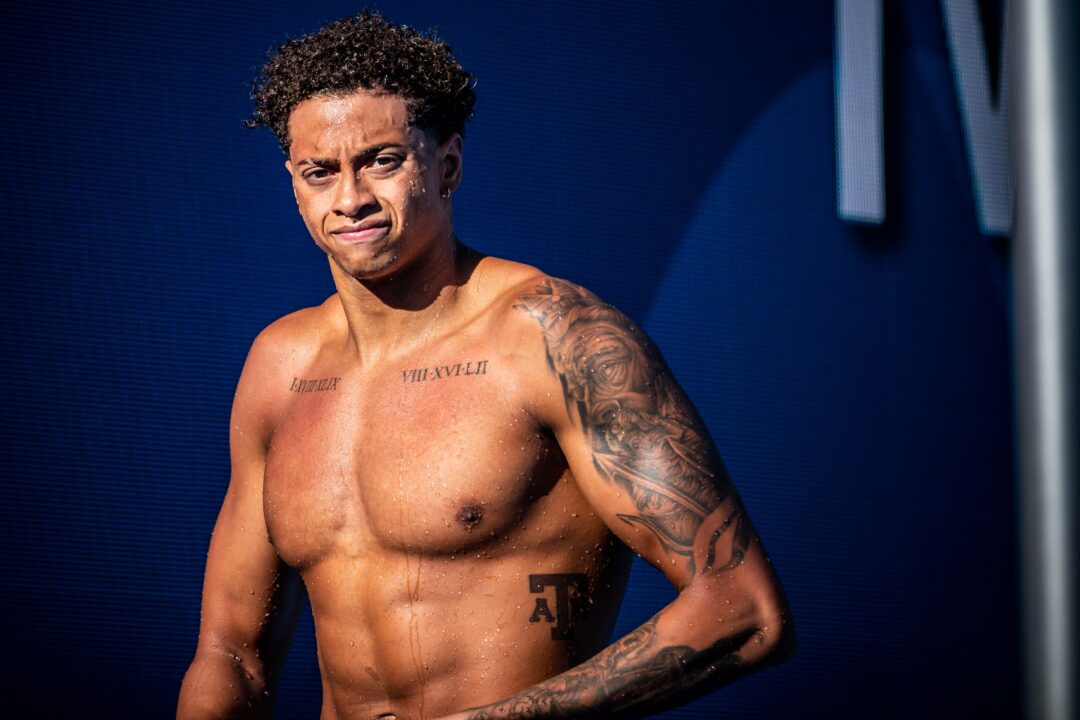 On Friday, the Texas men held their annual Quadrathlon, which is where swimmers do a 4×50 on 8:00, with each 50 being a different stroke. For each 50 event, there is a time associated that is worth 1000 points. Every tenth of a second faster that a swimmer goes adds 10 points, whereas every tenth of a second slower will subtract 10 points. In the end, the swimmer with the highest point total after the 4×50 is declared the winner.

As seen in race videos, all of the swimmers were suited for this event.

Following Casas in second and third were Carson Foster and Caspar Corbeau, who scored 4933 and 4896 points respectively. Corbeau’s 24.1 50 breast was the fastest time in the field for that stroke. He also went a 19.6 in the 50 free, which is faster than his personal best time of 19.85 set back in 2019.

According to Texas assistant coach Wyatt Collins, Casas is the first swimmer in the meet’s history to score over 5000 points in the Quadrathlon. He also mentioned that scoring above 4900 points has only been done a few times, and that anything over 4600 should be considered elite. In the table below, the times of this year’s top scorers are shown.

Thanks to swimming social media personality Kyle Sockwell, there is race footage of the Quadrathlon on YouTube. You can watch it here:

New’s flash Shaine is an elite swimmer, lol. Regardless, he is totally impressive, but I don’t think he’s eligible or should be eligible to be part of UT records…

Are the UT times posted?

For the meets where it shows 25 splits, it happens more than you think.

Where did Grimm wind up? Thought he would do well, strong in 50s of all the strokes

Probably avoiding a beat down.

His technique and dive are smooth as hell

They actually did something very similar last year. Douglass had the fastest total time. https://swimswam.com/gretchen-walsh-posts-21-06-50-free-23-04-50-back-at-uva-sprint-olympics/

Ok so spoiler alert: I’m actually scoring out the times from the Quadrathlons that the UVA and IU teams did last year and comparing them to the Texas men to write an article on it. For fun, I scored out the times of the Virginia women as well (using the Texas mens scoring system) and Douglass was actually the only woman not to score negative points in any stroke. In fact, she accumulated 200+ extra points.

Douglass is definitely the best sprinter of the strokes on UVA. There’s a video of her going 23. 50 fly from a push, she’s the NCAA champ in the 50 free, she beats Walsh in the 200 breast, and could probably do the same in the 100 and 50, and backstroke, well, idk.

Generally, it is a little strange that Douglass hasn’t gone 1:49/2:06 200 IM at least. Frankly I think it’s still in the cards. Hosszu goes 2:06.12 (the WR) and I really do think Douglass has proven at least short course that she’s better overall than Hosszu over the 50-100 distances, and then also is incredible at the longest- time wise- 200 event, mix the two together and… Read more »

1:49 I can see her going, it just doesn’t make sense team-wise for her to swim the event at NCAAs because her and Walsh will be taking points away from each other (unless walsh switches to 2breast and Douglass switches to 2IM)

2:06 is a different story. Long course and short course are really different, and in LC her backstroke is weak and can’t be covered up with a good underwater. Also, she said in an interview a while back that she doesn’t like the 2IM and based on her scratching the event at trials I don’t think she’s coming back to it.

you might be right but it’s not a good decision… she’s more competitive internationally in the IM (by a lot). In terms of NCAAs, I don’t understand why people get so caught up in taking points away from teammates; it’s almost always a wash except in a really extreme case. e.g. if she swims the 200 IM she’ll potentially take a point from A. Walsh but in the 50 it’s the same for G. Walsh.

The main takeaway here, other than Cases’ talent, is that if Corbeau gets his backstroke down, he’d be an incredible IMer.

he is a 1:40 yards id say that is incredible haha

Good point, hadn’t realized he was that fast.

I wish schools would consider having a meet in this format every now and again, I think it would be a fun way to mix things up.